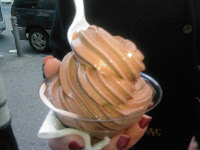 So, Kyotofu is kind of a weird place. Confirming the general consensus on SuperVegan, it is odd for an eating establishment whose main ingredient is tofu not to have more vegan options. With tofu an advertised ingredient the battle is already won; why add dairy?
That aside, the reason I wound up at Kyotofu is because on October 9, Serious Eats NY sent out a specific bulletin indicating that until October 17, Kyotofu would be offering a pumpkin version of its consistently vegan offering: soft serve soy ice cream. UNTIL OCTOBER 17. I do want to note, though, that Serious Eats NY described the ice cream as "light, creamy, and completely inoffensive [!?], but I chose to ignore what I figured to be yet another vegan dig from meat-centric Serious Eats. Anyhoo, I went out of my way to head over there a mere two days after the bulletin on October 11, only to be told that they were out of it. Out of it? A week before October 17? "But," I was reassured, they would "have it again". I ask you, what good was that doing me as I was standing there staring at a bunch of non-vegan, tofu-based desserts with my tofu-hating companions craving pumpkin ice cream as advertised? Sigh.
Mostly because I doubted I'd ever bother heading over to this non-vegan, tofu "dessert bar" (and people think vegan is exclusionary) again, I admit that I refused to let the trip be a complete waste and decided to partake in the chocolate soft serve. The small is very reasonably-priced and includes a topping, but the offerings are slim and mostly non-vegan. Again, weird for a place whose main ingredient is tofu, the word vegan seems to incite major confusion. Two separate people were perplexed by my inquiry as to whether or not the whipped cream was vegan, and a third was simply exasperated by it. Really? If you're exasperated by vegan inquiries in your tofu bar maybe you should clearly indicated things that are vegan or, better yet, ADD MORE VEGAN OPTIONS. It's almost as if Kyotofu's invisible tagline is, "Everything's made of tofu, but don't worry; we're not vegan!" To add insult to injury, the girl who took my order also seemed unaware of my rule not to mix healthy stuff with dessert, and was rather insistent on putting some kind of mixed fruit garbage on my chocolate ice cream. Eventually my forceful refusal resonated and I was handed a generous to-go cup of plain chocolate (not pumpkin) ice cream that was actually very good.
Something else a bit confusing about Kyotofu is that it tauts itself as a dessert bar and bakery, yet they do serve real food and even sake. I think they should make this clearer because, had we realized, I could have convinced my tofu-avoiding companions to at least partake in sake and edamame (which one has yet to connect with the soybean). What with their misleading title (dessert bar & bakery), the foyer filled with baked goods on display, and the fact that we were only shown the dessert menu- I thought I had been previously misinformed about their lunch and dinner offerings. But, now that I've checked their website I see that I was not. Hmm, very perplexing little place indeed.
Overall, while I'm happy that Kyotofu's website uses the word vegan to describe it's ice cream, I wish the establishment would be a little more vegan-friendly. And, I wish they'd have pumpkin when tauted! But, admittedly, the chocolate was very good and it is nice to know that you can grab a vegan ice cream in Hell's Kitchen (if you're not picky about the flavor). But, let's be clear here: it's no Lula's.
**
added 11/2/09:
Please see my follow up post:
Kyotofu: Quest for Pumpkin Ice Cream, Part II!
Posted by Abby Bean at 6:21 AM