A Boatload of Broccoli from the Farmer's Market

The broccoli at my local farmer's market was gorgeous, so I accidentally bought two heads even though one would have been sufficient.  There really isn't a bad way to prepare broccoli, but I decided to try two totally different recipes.  The crowns were so dense that I was able to be rather wasteful* with the stems and use only the coveted florets. 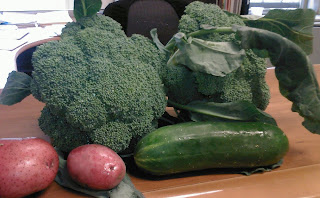 The first thing I made was an uncomplicated Alfredo with roasted broccoli.  I started by tossing the florets with minimal olive oil, salt, and freshly ground pepper: roasting them for 1/2 hour at 420 degrees. 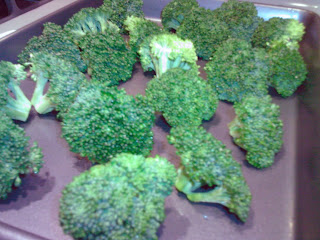 While the broccoli was cooking I set my pasta water to boil and began making the sauce. I used Vegan Yum Yum's Hurry Up Alfredo recipe, subbing roasted cashews for raw (it's all I had), and adding 1 tbsp agave for sweetness. I just threw everything in the Magic Bullet and it was done in a flash.

The finished dish was delicious.  I'd consider adding a tbsp of olive oil and/or perhaps another of water to the sauce next time, in order to thin in out and make it a bit creamier.  But other than that it was really good and very quick to prepare.

Note: regardless of what you do, your leftovers will be a bit pasty.  To re-creamify, incrementally add water to the noodles while heating & stir intermittently.  It will be just as delicious, if not moreso, as leftovers. 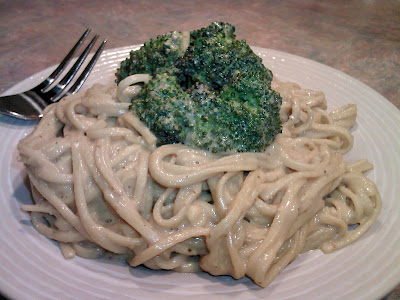 Next up, slaw.  I think Veganaise is amazing, but the idea of mayo and broccoli just didn't seem right.  It's already too cold for a light, vinegar-based dressing, so, I checked my arsenal of Natural Kitchen Cooking School recipes and found this one for broccoli and carrot salad from a cooking class I'd taken a couple of years ago. 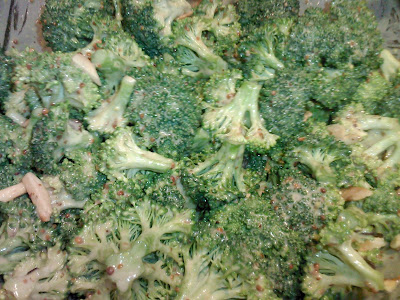 In the interest of using what I had in my pantry, I made a few substitutions:

You might also notice that I didn't have any carrots.  Taste-wise this didn't bother me, but it would have made the dish look prettier (thus the tomato for contrast).  I would also suggest cauliflower and/or sweet peppers for variation; the dressing is delish. 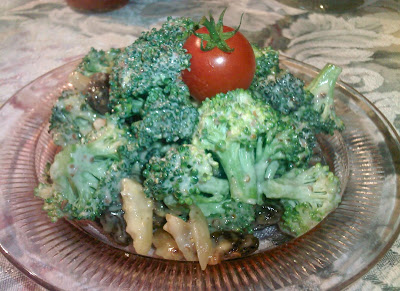 * They didn't actually go to waste; they made the local animal population very happy. 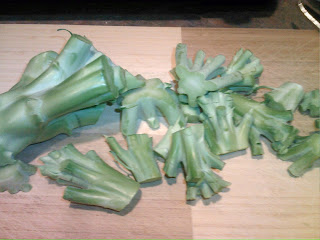