Halushki is an extremely buttery noodle dish made primarily with white cabbage, noodles, onions, and butter: lots and lots of butter.  So much butter, in fact, that the first time I made the Urban Vegan's halushki, I fell into the trap of using too much: resulting in the thought that perhaps I should have used olive oil instead.  But when I realized that would have defeated the purpose of the dish I decided instead to adjust the ingredients & (minorly) shake things up with an added veggie. 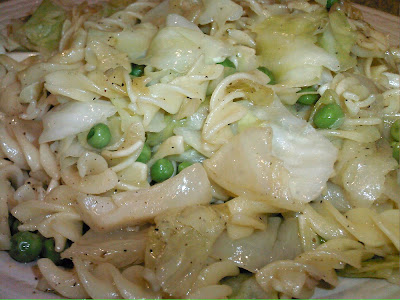 Directions:
Saute cabbage and onions in minimal butter until just soft (I like the cabbage to retain some of its crunch), adding salt & plenty of pepper as you move around the pan.  Add peas until just cooked so that they do not get mushy.  Prepare pasta according to directions, drain and toss with remaining ingredients.

Interestingly, I've found that I like this dish served at room temperature.  The butter makes everything pretty slippery when very hot and rather unappealing when cold; warm seems to be ideal.

Hot Halushki
This was definitely an improvement on my first, overly-buttery attempt, but how to make it even better?  Spice!  Take the same recipe and add as much sambal olek as you can stand: 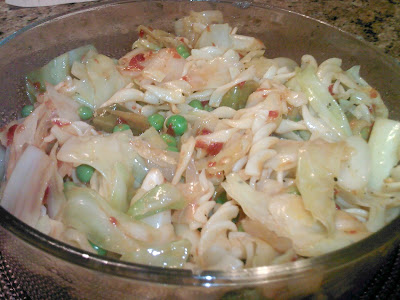