Things You Should Be Eating RIGHT NOW

This is a chocolate covered marshmallow bat that I've been saving  (thus the less than perfect appearance) ever since I received it at the Our Hen House launch last week.  The always generous Sara, of Sweet & Sara vegan marshmallow fame, was handing them out to as many people as she could reach within the overwhelming crowd that was packing MooShoes for the event.  Normally I would have just happily stuffed it in my face and been done with it wouldn't blog about one single solitary thing, but especially after having patiently saved it (ok; it was only four days and they were filled with cookies), I was floored by the decadence.  True to Sweet & Sara's extraordinarily stellar standards, it was far too incredible a treat not to make mention of: especially since they are seasonal. 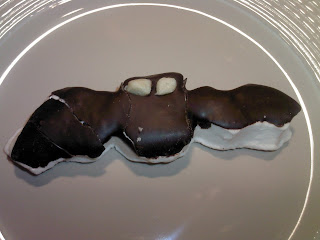 It must have started out as a sweet, vanilla marshmallow bat, but was made only better by the generous dip into what I can only assume is the same decadent, dark chocolate that comprises the sinful rocky road bark.  As if that wasn't enough, it's finished off with white chocolate eyeballs!  So.  Good.  I am a firm believer that everything in the world at Sweet & Sara should come in a chocolate dipped version, but if you prefer your marshmallows straight you can always get the marshie ghost with it's little "boo" face.
Also available for your seasonal whim: new marshie flavors chocolate peppermint and/or pumpkin.  I just heard about them yesterday, so I haven't tried them yet.  When placing your order, it would be easy to send me some pumpkin marshies (& bats).  My other favorites include toasted coconut covered marshies, biscotti, macaroons, and rice crispy treats.  Sara has my address, but make sure you use your credit card.  Meanwhile, remember that these seasonal goodies are ONLY AVAILABLE FOR A LIMITED TIME, so go get me you some! 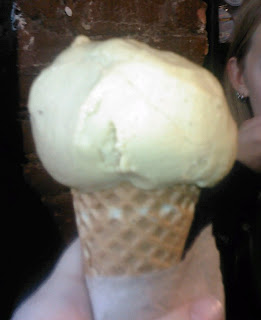 This is a pumpkin ice cream cone from Lula's (of which I'd already snarfed up quite a bit of).  I have been lamenting the fact that I managed to miss this flavor every single time it was offered last year and now that I've had it I have confirmed that all of my whining was justified; can you say best pumpkin ice cream ever?  They make a soft ice cream version and a hard; so far I've only had the latter and it was dee-licious with a capital DEE.  Follow them on Twitter & Facebook to track their flavors, but know that flavors often sell out quickly; don't you know Lula's always has a line?  or, better yet, just get your butt over there.  The worst that could happen is that they don't have the flavor you were thinking of and, instead, you have to choose from the ridonkulous list of all-vegan ice cream delicacies they happen to be offering at that particular moment.  Go!
Posted by Abby Bean at 7:44 AM

Email ThisBlogThis!Share to TwitterShare to FacebookShare to Pinterest
Labels: Lula's, Sweet and Sara