Candle Cafe is Just Not My Style

I visited Candle Cafe once years ago as a new vegan; it was probably the very first vegan restaurant I'd ever encountered.  I recall that it gave off the expected crunchy granola vibe and I was wholly unfamiliar with many of the menu ingredients.  Besides seitan and tempeh I had never even heard of edamame; watching someone eat it for the first time was quite bizarre!  Trepidatiously, I decided to be safe and just go for dessert: chocolate layer cake.  I remember thinking from the first bite that it was exactly what I was afraid of; it didn't taste "right".  My fears had been confirmed: being a vegan was not going to be tasty.

Fast forward many years and a bazillion sweets later; there are plenty of vegan sweets to choose from and most of them are divine.  I haven't been back to Candle since that fateful day, but I became a huge fan of Candle 79 shortly after they opened-- dessert included.  After dining at C79 recently within a limited time frame (we didn't have a reservation), I thought to give the original Candle another try for dessert. 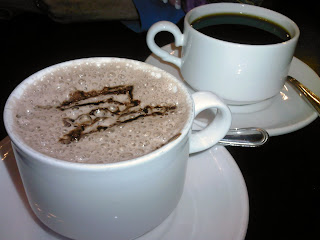 I was pleasantly surprised to find that the interior didn't strike me as vegan hippie as it had the first time; we've probably both grown in that respect: me in my tolerance and they in their decor.  The hostess was pleasant, conscientous and extremely efficient.  By his ease and familiarity with the patrons, it was obvious that the manager ran a friendly and well-oiled machine.  Our waitress, however, seemed the anomaly.  I quickly ordered a hot chocolate, because C79 has some of the best around; VM went with her standard black coffee.  The coffee was lukewarm at best; I've never met a waitress who couldn't tell that the cup she was serving did not contain a hot beverage.  And, while my hot chocolate was fine, it certainly wasn't the wondrous version that I have become a fan of at C79.

Because I'm not a fan of fruit (or vegetable) desserts, am spoiled by Lula's ice cream, and did not want to revisit the chocolate cake incident of so long ago, I have issues, choosing a dessert was no easy feat.  I decided on the chocolate chip pecan cookie and the vanilla cheesecake.  Yes, two; mind your business this was research.  VM chose the chocolate macadamia cookie. 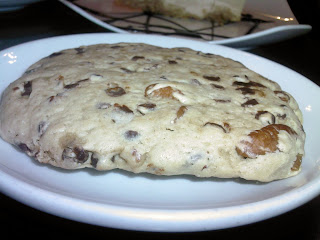 Although visibly filled with chips, the chocolate chip pecan cookie wasn't nearly sweet enough
for my taste.  Also, the whole pecans didn't bode well with me; I like nuts in cookies to be bits and prefer them toasted before becoming a cookie ingredient; these were neither.  As a more normal person someone who appreciates dessert nuttiness and isn't as much of a sweet fanatic as me, VM enjoyed this cookie, but agreed it was nothing that she'd go out of her way to have again. 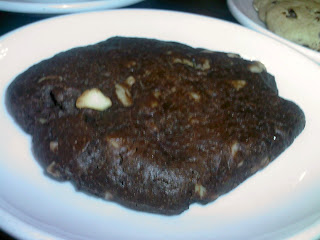 Despite looking like the less appetizing of the two, VM's chocolate macadamia cookie was clearly the better choice.  It was not fudgy as I had expected, but instead simply dark chocolatey and peppered with macadamias.  We both agreed that this one was good, but again nothing particularly special. 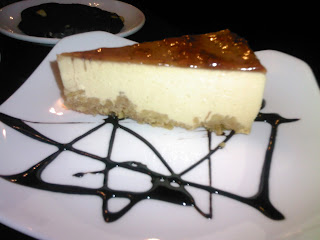 As soon as the vanilla cheesecake with an almond cookie crumb crust and a strawberry topping was served, it brought me back to the chocolate cake incident of years gone by.  The color, texture, scent; there was nothing seemingly decadent about it.  And, just like the previous visit, the first bite confirmed why: it wasn't.  On a sliding scale where one end is what you'd expect of cheesecake and the other tofu, this cake, unfortunately, erred much closer to the tofu side.  I'm sure there are some people who enjoy healthy tasting desserts, but I am not one of them.  I have acquired a tolerance, but maintain that if you are eating dessert you are looking for decadence.  You will not find it on this plate.

To make matters worse, we were barely halfway through the dessert when the waitress, who had yet to even check on us, unceremoniously plopped the bill down on the table and wordlessly ran away.  VM had to flag her down to request a coffee refill, although she was right on top of us when it came time to retrieve the credit card.  The final affront was when we asked for something to put our leftover cookie in and she flung a brown bag at us.

Perhaps if I had stumbled into Candle Cafe without the knowledge that it was related to Candle 79 I wouldn't have been so judgmental.  I still would have left unimpressed, but perhaps not as disappointed as I was having just come from Candle 79.  But the fact is, I had.

I realize you cannot judge a restaurant on the merit of two slices of cake alone, but it is my opinion that Candle Cafe can keep their noisy room and poor service; you'll find us at Candle 79 exclusively.
Posted by Abby Bean at 12:13 PM