The first thing we laid eyes on was this cupcake that was so gorgeous, so perfect...that VM thought it was fake.  Amy assured us that she gets that all the time and I can vouch that not only was it real, but better than any cupcake I've ever had.  The cake was absolutely exquisite: vanilla with the most perfect body and texture.  Not your run-of-the-mill cupcake by any means; instead, a mini-gourmet cake.  And the thing that made it even more incredible was that it was ALL CAKE: iced with a thin layer of perfectly sweet icing and then smothered with a decadent shell of chocolate, topped with a luscious cherry.  Literally: best. cupcake. ever.


While I was cordially allowed to photograph the goods, I apologize that my excitement resulted in a rash of blurry pictures; my bad.  On the left are coconut/chocolate-chip/dried cherry blondies: excellent and jam-packed with goodies so that each bite contained every flavor.  In the middle are double chocolate chip cookies: rich and sweet.  On the right are pumpkin, butterscotch chip cookies that I neglected to try; I was a bit over-pumpkined at that point, but they did look great. 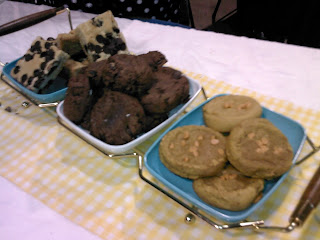 And then there was a tower of peanut butter truffles and a few mini cupcakes.  No offense, mini-cupcakes, but even though I didn't taste you I know you can't compare with your gargantuan, chocolate-covered neighbors.  The truffles were peanut-buttery deliciousness. 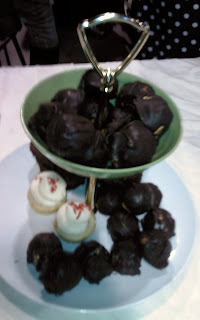 In short, everything was outstanding.  But the cupcake was especially exquisite and, quite frankly, the BEST CUPCAKE EVER.  Seriously, I'm not even a big fan of cupcakes in general and this was DIVINE. 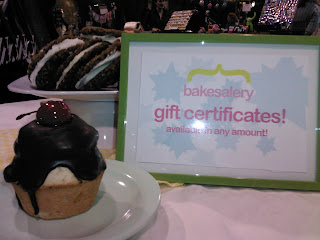 You can order any of these desserts and lots more via Bakesalery on Etsy or follow on Twitter to find them around town.  Remember: gift certificates are available!  (hint, hint).
Posted by Abby Bean at 1:05 PM