Curly's: Vegetarian in Shades of Yellow

I'm not sure how I've made it this long without ever having been to Curly's Vegetarian Lunch, but I finally had the opportunity to go recently.  My first impression: crowded and yellow.  Little did I know this would ultimately be the theme of the meal (with beige/brown variations).

I decided to order from the breakfast anytime portion of the menu, and chose the croque madame: two fried eggs or grilled tofu with sham and swiss pressed in wheat and served with curly fries or side salad, veganized. 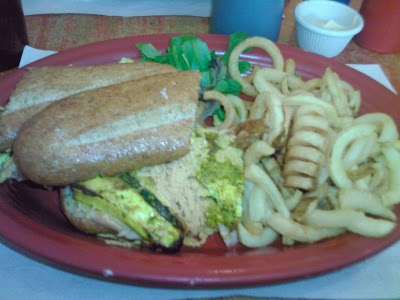 I was served a giant plate, half of which was piled with perfect, curly fries; no complaints there.  The sandwich was large and consisted mainly of thick, turmeric-yellowed slabs of tofu; un-melted, cheddar Daiya; and the weirdest vegan ham I've ever come across.  This was not a vegan version of the pink, processed ham I was hoping for; instead, it was more indicative of "pork: the other white meat", or, what VM has explained to me is considered "fresh ham".  I'm not sure why this type of ham would be the ham of choice for breakfast items, except for the purposes of fitting into the beigey/yellow theme of everything in the restaurant.  Either way, I can tell you definitively: eew.  Once I picked off the ham the sandwich was fine, but I like better than fine; I wasn't impressed.  However, let me reiterate: the fries were divine.

My fellow diner is a Curly's fan (highly recommends the nachos) and she ordered one of her regular picks from the brunch menu: the Grand Slam breakfast [edit 3/7/11:I have been corrected; her meal was actually the Slumberjack breakfast].  It was a giant plate crowded with pancakes, curly fries, tofu scramble, and the same sham.  In other words: brown, light yellow, yellow, and beige.  She enjoyed everything, even after I pointed out the disturbing color trend. 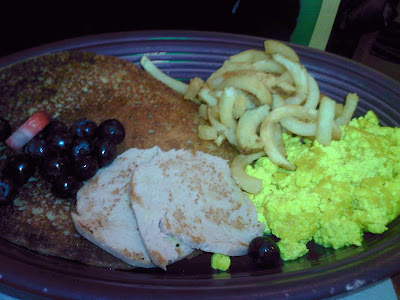 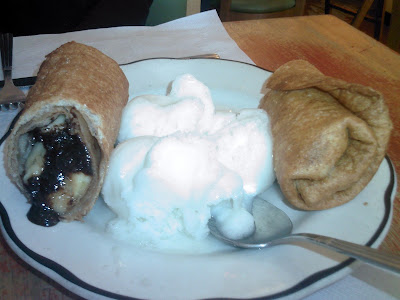 I was surprised by how small the chimi was; it looks like they start off with a huge tortilla, but wrap and rewrap it around what barely equates to half of a sliced banana and a lumpy, bland chocolate sauce.  Basically lots of dry, fried dough with a little banana & chocolate.  Worse, though, was the "ice cream", which had a sorbet like texture and left you with a distinctly artificial aftertaste of indeterminate flavor.  The waitress insisted it was plain, vegan, vanilla ice cream, but, um, no.  And also, eew.  In a world where Lula's exists, how can this be Curly's best vegan ice cream offering?

Disappointing dessert showing notwithstanding, I left Curly's wondering why I ever bothering going anywhere for brunch besides Sacred Chow, which I highly recommend.  I can't say the same for Curly's.
Posted by Abby Bean at 3:36 PM