I don't know why, but I've had it my head that I should make a stromboli.  It seemed easy enough in my mind; I had visions of preparing a regular pizza and then simply rolling it up into a neat, precise boli.  The first part was true enough; I used my now standard My Bread pizza dough recipe* and carefully layered my accoutrements: 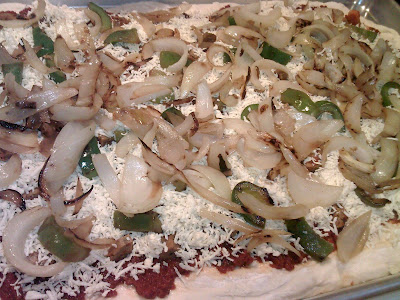 Then I rolled.  The boli kind of stretched as I did, so there was no time or extra hands to slow down enough for fancy folding.  Luckily, it wasn't necessary; the ends inexplicably self-sealed into neatly rounded pockets.  However, the actual bulk of the boli grew so much during the manipulation that I had to simultaneously roll and slide so that the extra long boli would be contained fit diagonally on the sheet pan.  No harm, no foul.  I did poke a couple of little holes along the top for venting, and sprayed it with olive oil before popping it in the oven.

Thirty minutes in, the boli was already looking and smelling impressive.  I decided to let it cook for an extra 15 minutes and the 45 minute cook time was perfect.  Once cooked, I removed it from the oven, vented it a few more times, and let it stand for about five minutes before slicing. 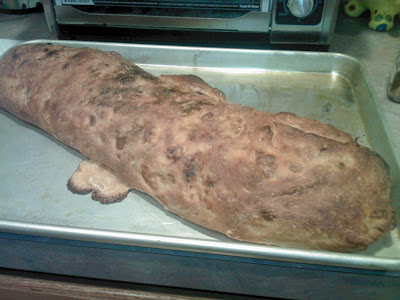 I'm not sure why, but the interior view looked more like I had just folded the dough over top; there was none of the dough/topping swirl that most stromboli boast.  However, the taste was phenomenal. 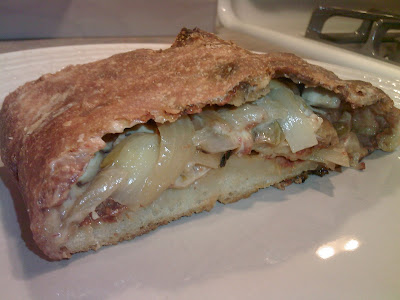 The only thing I'd do differently would be to separate the dough in order to make 2 smaller, tightly rolled and overall more controllable stromboli- instead of one unwieldy monster.  But as far as taste is concerned: no complaints.

*Please keep in mind that one batch of this recipe is intended for 2 extremely thin crust pizzas, but I prefer to make 1 thicker pie: resulting in a crust somewhere between a regular New York pie and a Sicilian.  I used the same 1 batch for my monstrously sized stromboli.
Posted by Abby Bean at 9:37 PM