I was recently in the position of wanting to show my gratitude to a group of people that I didn't know very well, but whose efforts had made a difference in my life.  I tried to decide on a gift that would be appropriate for both sexes, different ages, and varying palates.  I wanted something festive that would make a person's day, something that said, "A. Bean thought of me today".  And, when I considered what I might most like to receive, the answer was obvious: Vegan Treats.  I assumed none of the recipients were vegan, but Vegan Treats' authenticity and variety are loved by all the vegans and non-vegans I  know, so why not?  A gift should be something the other person will enjoy, as well as from your heart.  And what screams "from this Bean's heart" more than Vegan Treats? 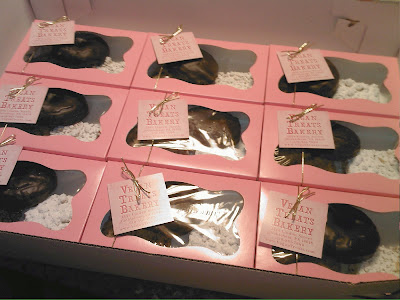 I chose an assortment of family favorites that I feel are a good indication of what Vegan Treats is capable of, leaving enough margin for error in case someone didn't like nuts, coconut, or, worse, (gasp!) chocolate.  The visual (not to mention extraordinary taste) of the chocolate-coated devil's food donut, raspberry coconut crumb bar, and the incomparable cowboy cookie made a most impressive presentation, while remaining casual enough for people not to feel like they'd have to stand on ceremony to eat.  The fabu pink box and adorable Vegan Treats' tag and bow didn't hurt either. 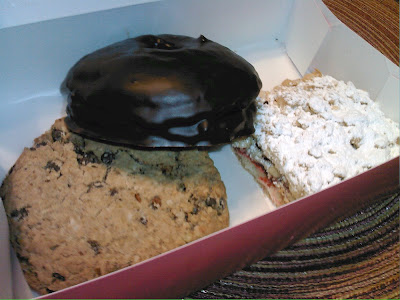 Each and every recipient was thrilled with the gift; nothing like hearing exhilarated exclamations of glee from people who didn't expect to receive a box of goodies during the course of their workday.  And, in an unexpected turn of events, I actually met another vegan during my deliveries; she hadn't ever heard of Vegan Treats!  How is that possible, I wonder?  Perhaps I really am eating more than my fair share?  You can bet I schooled her in the fabulousness that is VT. 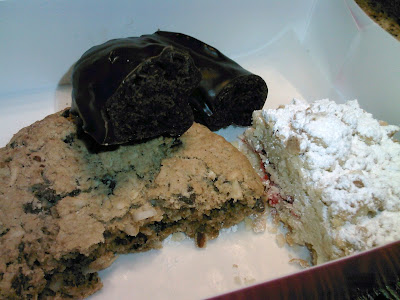 It's nice to share a happy thought with others, especially others who have helped you to achieve a personal goal.  It's even nicer when that happy thought spreads the vegan message one delicious bite at a time.  Thanks to Vegan Treats for being a friendly, efficient, and uber-talented class-act and for making the collective tummies of the recipients and myself (surely you assumed I ordered an extra box for me) very happy.  XOXO
Posted by Abby Bean at 4:46 PM