Gardein: Too Meaty for Me; Great Alternative for Meat-Eaters

I bought a Gardein Trio for the Omni Dad one night and, as I surreptitiously prepared it, I was a little grossed out.  It was basically rice, sauce, and a molded ball of vegan chicken stuffed with veggies; it didn't matter that it was faux: any kind of stuffed meat product makes me think of turducken.  But he ate it thinking it was real and actually thought it was good... which is why I haven't been in a rush to try Gardein myself.  I'm an ethical vegan who never much liked the taste of animal products in the first place (except, inexplicably, bologna). 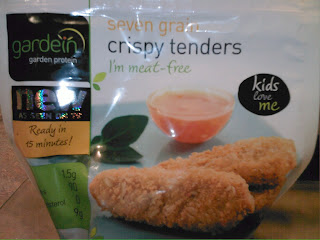 But then I spied them on sale and figured it was as good a time as ever for a taste test.  First, I chose the seven grain crispy tenders because they seemed like they would be the closest thing to the breaded chicken cutlets I remember.  I baked them longer than advised because they weren't getting crispy, but eventually resigned myself to the fact that weren't going to; I guess the breading isn't thick enough?  Another oddity: even though I cooked them at 400 degrees for over a half an hour and ate them immediately, the inside was barely warm (I like food served mouth-burning hot). 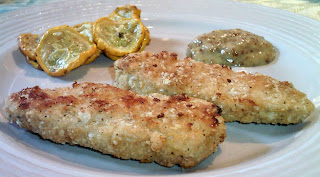 Besides ingredients, I don't usually read labels.  But I happened to notice that it says on the package that it contains five servings.  There must have been a hole in my bag, because there were only eleven not quite 3" tenders in there and I don't know for whom 2 1/2 would be a meal.  There might be two in my picture, but rest assured that I ate five, and a whole heap more of yellow zucchini. 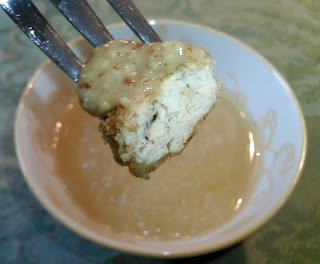 Gardein looks like white meat chicken and, in my opinion, tastes like what I remember of the original: somewhat dry, bland, a little rubbery, with a slight aftertaste.  The coating seemed only to add a light pepper taste and, overall, there wasn't anything about them that made me think, "yum, can't wait to eat these again".  Instead, it was a good excuse to use up some condiments that had been languishing in my fridge.  My hypothesis is that in the same way that people like the seasoning and not the actual taste of meat, I simply did not like the seasoning/coating/preparation of these tenders.  That and I don't really miss meat.  But do I think they would fool an omni?  Absolutely.  Additionally, I think these would be great for kids: very convenient and as authentic as I can vouch for, having not eaten meat for decades. 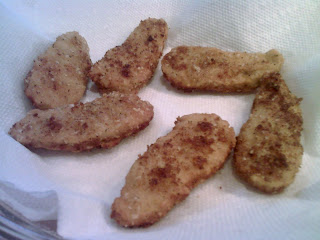 Note: If you fry them in oil on the stovetop they DO come crispy.  And then you can smother them in marinara and Daiya, and feed them to your omni dad who never notices when his chicken is faux.  Thanks, Gardein, for lowering his cholesterol one tender at a time. 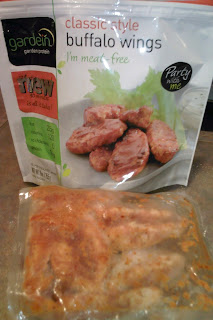 When I bought the tenders I couldn't decide between them and the buffalo wings, which I assumed would be reminiscent of my first mock meat meal: the luscious buffalo wings from Red Bamboo.  Because they were on sale I got both.  The first glaring difference between the tenders and the classic style buffalo wings is that with the tenders you can cook as many as you're planning to eat, but the wings come packaged in such a way that you kind of have to cook them all at once.  This isn't necessarily a problem since there are only eight 2" wings in the package (2 1/2 servings according to Gardein!).

Once again, I cooked the wings longer than suggested; thankfully, they seemed to retain the heat a bit more than the tenders.  I tried the sauce first: while I didn't find it buffalo-y, I was impressed that it did have an impressive amount of spiciness.

Unfortunately, none of this mattered after I took a bite.  Way too meaty!  Even though the tenders tasted like chicken, if I hadn't prepared the wings with my own hands I would have thought I was being duped.  Tender and moist, I literally could not take another bite.  For someone who likes nothing about the taste, texture, and mouth-feel of meat these are extremely gag-worthy.  And you know what that means: omnis will not only be fooled, but will love it.  So where did the rest of the wings and tenders go?  Omni Dad.  Did he enjoy them?  Most def.  Did he know they were vegan?  Not a chance.  Does he read my blog?  No he doesn't. 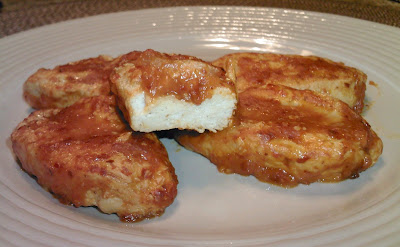 I still enjoy the occasional treat of the uber-flavorful Red Bamboo drumsticks, as well as a new favorite from Foodswings.  There is something inherently faux about them that I indubitably prefer over these way-too-authentic-for-me Gardein meat sticks.  That being said, I know plenty of ethical vegans who love Gardein for compassionately replacing the taste of something they've missed; they are simply not for me.

I would like to note that Gardein's marketing approach is definitely "meat-free", boasting themselves as "plant-based meat-like foods" as opposed to scary vegan.  In fact, many of the recipe suggestions printed on the packaging include recommendations to serve with various dairy products.  I find this an unneccessary attempt to distance themselves from vegans, but what do I know?  While most of the online recipes contain dairy products, they do add the general caveat "vegan options available" to egg/cheese/dairy ingredients.  Alternately, Chef Tal's online recipes all seem to be vegan, so that's good.

The bottom line is, I don't like the taste of meat.  So, if I don't like the meaty taste of Gardein products, I think that's saying something positive about the authenticity.  And, if Gardein gets more meat-eaters to go faux I'm all for it.  Frankly, this leaves them with no excuse.
Posted by Abby Bean at 5:04 PM