Do Soy & Sake Diners Have to Re-Start Their Vegan Clocks? A Review in Two Parts

VM and I love us some Soy & Sake.  It's pretty (minus the fishtank), it's delicious, the servers are pleasant & efficient, and it's a far enough walk from Lula's to restore your appetite. 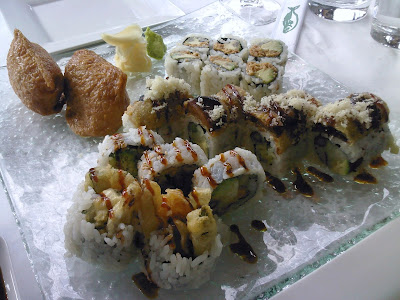 On a recent visit, I went with my standard lychee martini, and she went for the pomegranate martini. The pomegranate sure was pretty, but the lychee always wins. 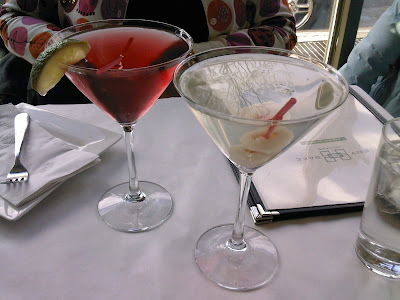 Of course we had to order the chicken & vegetable tempura appetizer, the only faux meat VM ever touches. 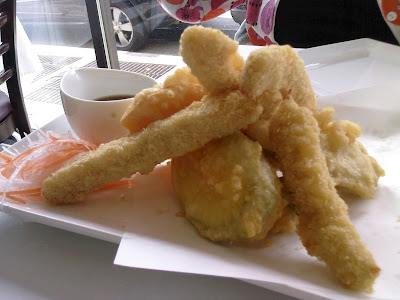 As a second appetizer we went with something we'd never noticed before, Naruto: avocado, oshinko, asparagus, mango, kampyo wrapped in cucumber with sweet wine vinegar.  It was so, soo, sooo good. 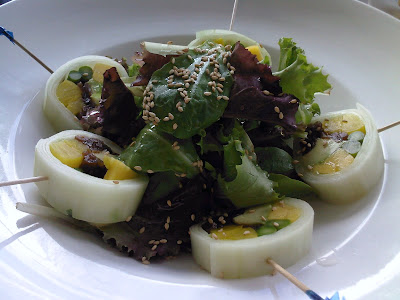 And then it was sushi time; we ordered all of our veggie favorites. 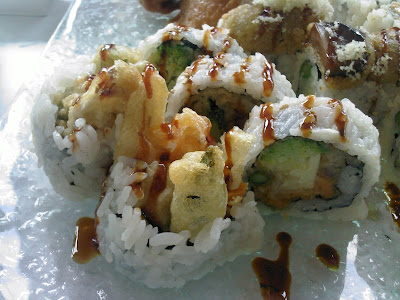 Just take a gander of all the tempura veggies stuffed in there: 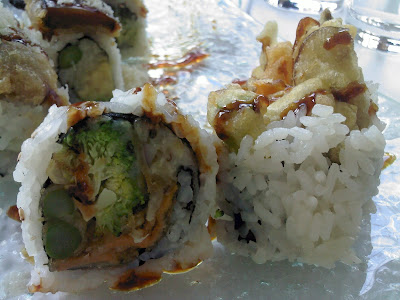 The veggie lover roll: cucumber, avocado, asparagus, topped with mushroom tempura and vegan eel sauce.  No, I don't know what eel sauce tastes like, but the vegan version is sweet.  And yes, by this point it was tempura overload- even for us. 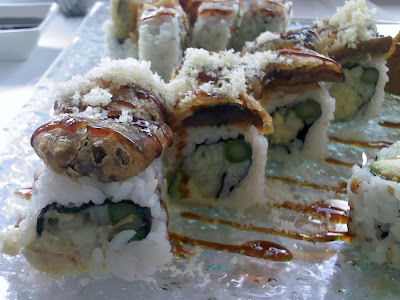 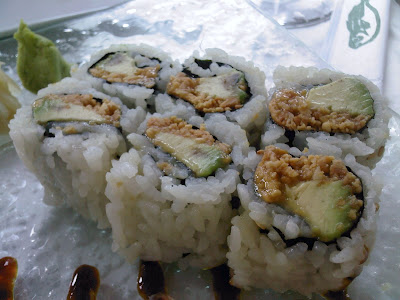 I don't know what is wrong with me, but I still couldn't find the inari listed on the menu.  Luckily the server knew exactly what I was talking about and the little pockets of goodness were mine ours, ready to be filled with soy sauce, ginger, and lots of ridiculously mild wasabi.  Seriously, the wasabi at Soy & Sake perplexes me with its tameness. 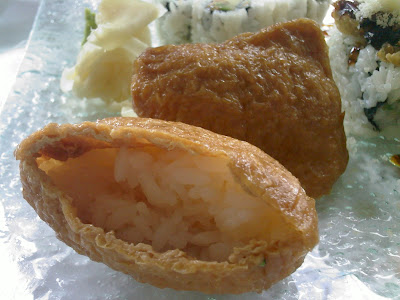 And, finally, I couldn't help but to order the pad thai chicken: traditional spicy Thai noodles with soy chicken, tofu, scallions, bell peppers, preserved radish, and crushed peanuts.  As you might imagine, at this point I was quite stuffed.  But I've never had pad thai and I've been meaning to try it.  I only managed a taste and it was good; but, unfortunately, the leftovers didn't fare too well: the microwave turned them into a pasty mass.  My bad. 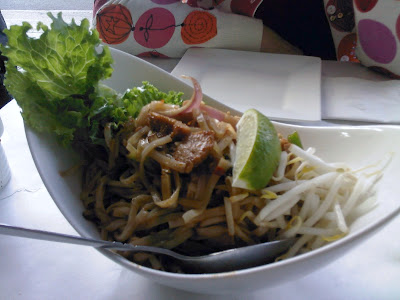 I considered ordering the sweet and sour chicken as well (I wouldn't have eaten it all!), but the server literally told me us I we had ordered enough (I know, but still).  So, of course I was too embarrassed to order the delicious, Vegan Treats, chocolate oreo cheesecake that I only seem to find at Soy and Sake.  Next time!!

VM and I always enjoy a sushi feast at Soy & Sake, but when with friends I tend to order the General Tso's Chicken: a generous amount of chicken and perfectly steamed broccoli (you know it has to be for me to say steamed broccoli is good) coated with dried, whole chili-laden Tso's sauce, topped with giant cashews, and served with rice.  After enjoying this on a recent visit, I was disappointed to receive an anonymous tip that the mock meats served at Soy & Sake might not be vegan.

I returned to the restaurant as promptly as possible to inquire; the waitstaff maintained that the menu is vegan by default and the non-vegan indications are accurate as noted.  Still, I decided to delve further. 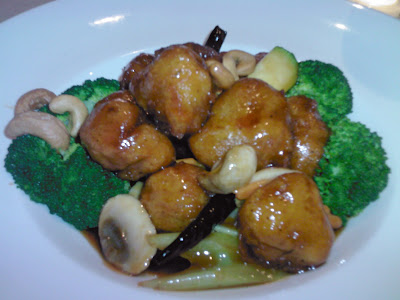 According to the waitstaff, Soy & Sake serves Absolute Vegetarian mock meats; it is my understanding that Red Bamboo and VP 2 do as well.  But a visit to the site proved curious, as when you click on any item on the product page, you will note that none include a complete ingredient list.  Instead, they simply say "100% meat free, egg free", with no mention of dairy.

In an effort to gain clarification directly from the source, I've left numerous messages on the Absolute Vegetarian voicemail, but have yet to receive a return call.  Emails to Soy & Sake have also inexplicably gone un-answered.  As a result, I am even more concerned that these meat analogs could contain dairy derivatives (consistently or inconsistently); what else would prevent the company and restaurant from responding to a customer inquiry?

If you are also concerned and have the resources, I have two words for you: OPERATION PANCAKE.  Until then I'm convinced otherwise, to be on the safe side, I'll stick to the veggie sushi & martinis.  Or, I might not go at all.
Posted by Abby Bean at 5:07 PM

Email ThisBlogThis!Share to TwitterShare to FacebookShare to Pinterest
Labels: Soy and Sake