Once upon a time a young bean asked a server at Chi Chi's, "What is queso?"  The answer was, "It's like a big bowl of melted cheese", and she was sold.  But that was not the end, because years later she would become vegan and the big bowls of melted cheese would elude her.  Fast forward eleven years.

Nacho Mom's Ultimate Vegan Queso had been saved in my Pangea cart on my radar for some time when the Food for Lovers Vegan Queso came on the scene (I know they consider themselves "The World's First Vegan Queso"; this was just my own, personal discovery timeline).  Since I had already planned to order a bit of Daiya, I added both jars (and more) to what turned out to be quite a large shipment of vegan cheese products. 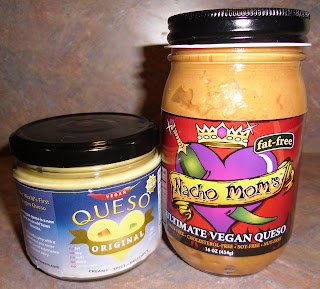 I have my own tried and true method for preparing multi-layered, baked vegan nachos that I adore, but I was anxious to get back into the old school swing of things with simple chips and queso.  And, once the cheesy smell started permeating the air, members of the esteemed tasting panel started coming out of the woodwork. 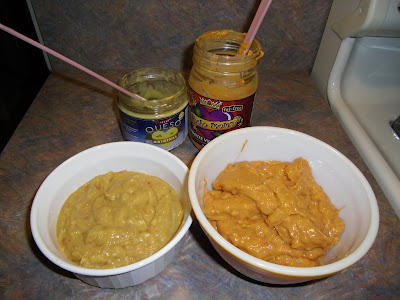 Let's start with Food for Lovers Vegan Queso.  I hate the name.  Ok, perhaps it's cute that the creators love animals, food, health, the planet, and each other...but it's cheesy.  Maybe that was the point?  It could just be me, but who gets all swoony about love when thinking about cheese?  I get swoony about cheese when thinking about cheese.  Besides that, the term "lover" just conjures up a different kind of love that has nothing to do with my cheese life.  But that's just one person's opinion and, admittedly, has nothing whatsoever to do with the taste.

Overall: creamy, delicious, with a nice kick.  I think this was the schmaltzier of the two.

Onto Nacho Mom's Ultimate Vegan Queso.  The packaging is adorbs, but the company's site is actually a blog and I can't decide if it's not easily navigable or if it just doesn't contain that much information.  Either way, it would seem that it should be a bit more professional; I'd venture to guess that creating, marketing, and distributing a vegan food product is the hard part, not the website.  [Update 5/8/11: please see the comments for the updated link.]

Overall: lumpy, good, with no discernable spice.  I think kids would love this.

At first I thought I liked FFLVQ much better (the creaminess is hard to resist), but as I stuffed my face continued eating I decided that they both had their own, distinct flava (not to be confused with flavor, although that too).  The rest of the esteemed tasting panel- one vegetarian and one omnivore, gobbled up every last drop of both with no obvious preference: proving that either could pass muster as authentic queso.  For the record, both of these options are fat-free and have similar ingredients: most notably nutritional yeast.  I generally like but don't love nooch; these each tasted definitively cheesy, not noochy.