I was on auto-pilot when I was making the chocolate almond cookies for Mother's day, and I accidentally made icing intead of ganache.  I didn't want it to go to waste, so since I still had some marshmallows left over from Passover (see, I do have willpower), I decided to make some sort of marshmallow stuffed "Mounds" type of cupcake. 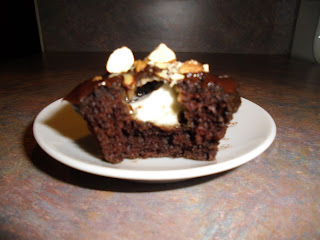 This recipe from the Humane Society was my general inspiration, but I didn't follow it; instead, I used your basic chocolate cupcake recipe from VCTOTW.  I used the large-sized, mini cupcake cups that just sit independently on the baking sheet; to give you an idea of the size, they are slightly too big to act as liners in a mini cupcake pan.  Also, these cups kind of expand as you fill them.  I poured the batter to the halfway point, then plopped in a piece of marshmallow (about 1/3*) and pressed it down. 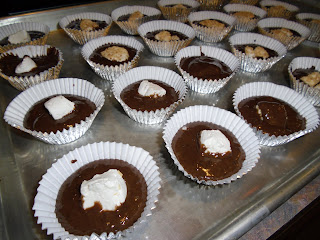 Then I spooned just enough batter over each one to cover the marshie. 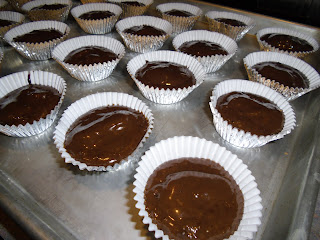 Once cooled, I warmed up my refrigerated icing: adding a bit more soy milk and vanilla.  And, what do you know?  The icing ultimately wound up quite ganachey, which was fine; I don't really like frosting anyway.  But, I'm not at all sure how this happened.  Nonetheless, I'm happy to chalk it up to "magic" (as I do with most math and science).

Once iced, I was afraid that the chocolate on chocolate cupcakes looked too blah.  A neighbor who apparently doesn't know me very well was recently kind enough to have gifted me a Harry & David basket; since I don't do pears and apples, I thought it was fitting to utilize the almonds that were also included to garnish my extraordinarily sweet cupcake.  So, I chopped 'em up for sprinkling and the contrast (and crunch) wound up making all the difference; my "Mounds" had become "Almond Joy". 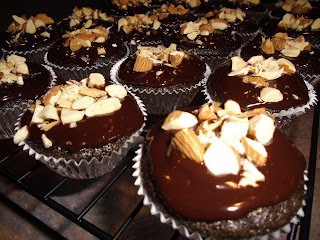 These were most impressive to look at, but- more importantly, they were totally scrumptious to eat.  However, in an effort to achieve maximum marshmallow madness, I'd recommend making regulation sized cupcakes with a whole marshmallow inside.  The marshmallows deserve it and so do you. 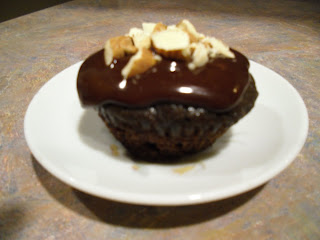 * When cut, the vanilla marshmallows get very sticky and hard to control so you'll have to eat most every one that sticks to your fingers, but the toasted coconut are very obliging.
Posted by Abby Bean at 8:02 PM