Counter: Your Reputation Exceeds You

I hadn't expected to return to Counter, but I found myself there again recently at the behest of two fellow vegan foodies.  It was nearing the end of brunchtime when we arrived and the waitress didn't hesitate to tell us to hurry up making our decisions.  She could have been considerably more friendly and/or diplomatic with her choice of words and attitude (if only to have started us off on the right foot), but I was still hoping for a good experience.

To share, we were going to order the crowd pleasing vegan nutella pastry basket (breads and muffins) that comes with vegan nutella, but with a visit to Champs in our future we decided to instead go with the potato latkes.  Served with a tiny portion of "housemade applesauce" (that tasted like the pear apple compote it used to be served with), it was just all right.  There was nothing specifically wrong with the dish, but it was nothing to write home about either; at almost four bucks a latke I expected more.

I was going to order the most recent incarnation of the frittatta, but after having been grossly disappointed by every variation that has followed the incomparable frittatta florentine I didn't want to bother.  I couldn't really get excited about anything on the brunch menu so I chose simplicity: French toast.  ArielaIsAwesome warned me that it was just basic French toast, but VM ordered it once and it was just the way I like it: with crispy edges and mushy middles.  I should have listened this time around, though; as with most good things at Counter, the good version bit the dust.  So, there it was; a yawn on a plate. 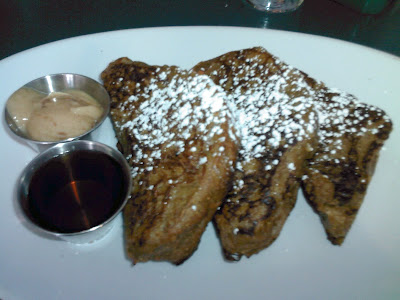 I admit that I don't like thick cut French toast to begin with, but if you choose to serve it that way, please do so in a manner whereby the entire slice of bread is cooked through.  As if the boredom of the dish wasn't enough, to add insult to injury, the center was simply uncooked bread.  Luckily, when slathered with the delicious cinnamon butter and drowned in extra maple syrup, it was okay.  It was supposed to be served with walnuts, but I didn't see any: in the toast, in the butter, in the syrup; I checked everywhere...no walnuts.  Sigh.

My vegan dining companions both went with the biscuits and gravy.  I've never been able to wrap my head around this dish, but I tasted it and as a non-fan thought it was okay.  Just David gave it a 3.5 out of 5, and ArielaIsAwesome a solid 4, so I'd say it must have been pretty good.  The real issue, though, was that one of the two identical orders was served sans hash browns and, by the time they finally came out of the kitchen, the rest of the food had gotten cold.  This left me wondering how hard it could be to bring three complete dishes to a table at once when only two of your restaurant's tables are occupied?  Or, more to the point, why the waitress was so obviously apathetic about this and everything else relating to us- and then closed on a tacky note when she hovered over us immediately and constantly after placing the check on the table. 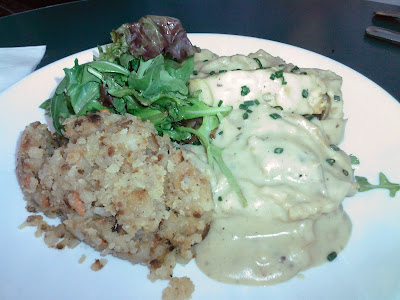 Over the course of the past year or so Counter has changed their menu numerous times (for the worse), adding uninspired dishes and removing favorites.  They've raised their prices considerably and have drastically decreased their portions.  As Counter is a somewhat upscale establishment, in a tough economy I can almost forgive this-- but not when the service and/or atmosphere is not up to snuff in proportionate merit.  There was no music playing, our waitress was obviously bored by us, the food was mediocre, and, most egregiously, the chair I sat in was almost entirely reupholstered with duct tape.  Not cool, Counter.  I wish you the best, but it's going to take a while to get me back.
Posted by Abby Bean at 7:57 AM