This is a mini post on two, rare, love birds VM and I met whilst out and about.  At first glance they looked like a couple of regular sparrows, but as we watched we saw a stunning example of love and loyalty.

We have no way of knowing, of course, if they are involved in a romantic relationship, are simply close friends, or perhaps even family members.  Whatever the scenario, they obviously share an incredible bond: rarely leaving each other's side.

Forgive me the gender generalizations.
It would seem that one of the birds was a bit weak and small.  She chirp-squawked almost constantly as her little wings flapped.  Her companion had a significantly more robust look about him in comparison.  They were two of many birds in a high human traffic area: many crumbs to be had, yet much competition.

For her part, the smaller bird did her best to seek out and procure morsels of food, but it seemed that her beak could not manage to break eating-size pieces off to ingest.  Thusly, her companion would grab a sizable chunk, munch off a bit into his beak, then place it gingerly in her awaiting mouth: over and over.  The entire time we watched them he seemed never to take a bite for himself.

Not only was the seemingly healthier bird a selfless caretaker, but so involved in the well-being of his companion that very often he would have the bulk of his booty stolen just as he had turned his head to offer her the first taste.  This did not seem to deter him in the least, as he would simply procure another morsel and start all over again. 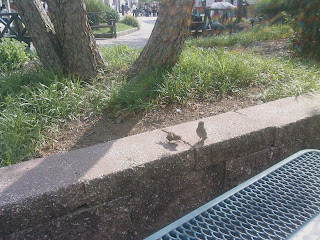 Love is selfless and caring...and keeping your wits about you when the going gets tough.
Posted by Abby Bean at 7:32 AM