Because I love peanut butter so much, it's easy to forget that I usually don't like peanut butter cookies (because they're not peanut buttery enough).  My Chick-o-Stick version was really good (because of the Chick-o-Sticks), but the only other one I've every really liked was Evan's version from the bakesale.  So, I decided to go out on a limb and try to recreate his crispy concoction.

I bought some oats even though I am vehemently opposed to health foods in sweets do not like oatmeal cookies.  Next, I pulled out the bag of Lieber's white chocolate chips (blue bag) I'd been saving in my pantry.  I'd only ever bought white chocolate chips (yellow bag) once before and I hadn't really liked them, so I was hoping that this brand would be better. 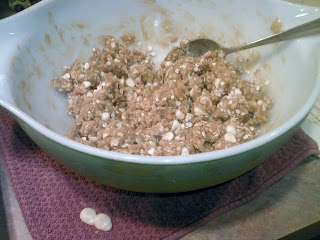 I followed the recipe for crispy peanut butter oatmeal cookies (plus my chips) from VWAV, making adjustments for the fact that I don't use natural peanut butter.  My first batch were giant cookies that, to my dismay, were not crispy at all but instead light, fluffy & moist.  Drat! 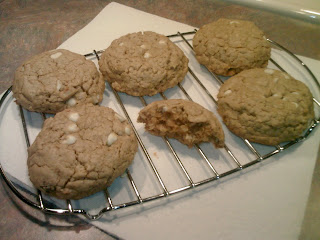 For my second batch I decide to try to make them smaller and slightly overcook them cook them a little longer in an effort to capture more crispiness.  No go; they were just as soft, albeit mini. 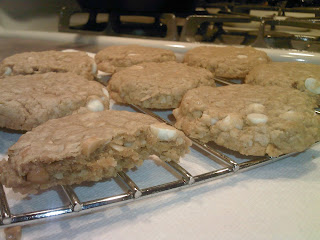 At this point I decided that in order to bind the moisture and better promote crispiness the answer might be more oats.  I added a generous amount and cooked a batch of the same size for the same length of time (ok, maybe a bit more); these were better, but still didn't hit the mark.  I ask you, what does a vegan have to do to bake a dry cookie? 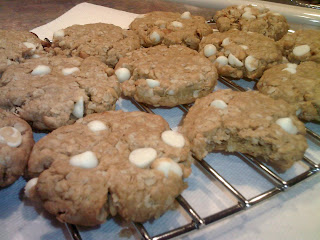 So I went to town and added as many oats as the remaining batter could stand and still form cohesive dough balls.  Then, I flattened the cookies so thin that the chip peaks were actually peeking up out of the batter.  Yes, the result was tasty and crispy.  Did they taste like the ones I was trying to replicate?  Not in the least. 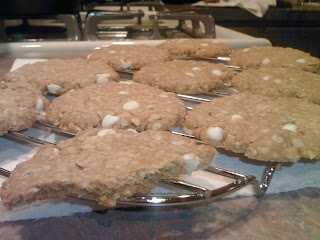 To make matters worse, I was not thrilled with the white chocolate chips.  As a matter of fact, I thought they were kind of non-sweet, un-white-chocolatey, and a bit chalky.  They weren't horrendous, but the one I ate by itself (the doubler from the first pic) was not good; they definitely need to be an ingredient.  Perhaps worse than that, the entire esteemed tasting panel collectively consumed one half of one small cookie.  Granted these are people who simply don't like peanut butter flavored things, but come on; cookies are cookies.

So, most of the arsenal went to my co-workers, but somehow I forgot about a few that were still hanging around at home.  After only a few days they were kind of on the stale side, so I decided to break them up and feed them to the squirrels.  Finally, an appreciative audience!