Brunch at Sprig and Vine X 2

Ever since being wildly impressed by lunch, we've been wanting to try Sprig & Vine's brunch offerings.  We were thrilled that we were greeted warmly at the door and instantly bonded with our waitress, Jackie, over Scrabble.  We started out with our usual breakfasty beverages of choice: Small World coffee for VM and fresh-squeezed orange juice for me.  Tasting like it came from sweet clementines and without any pulp, it was one of the best juices I've ever had. 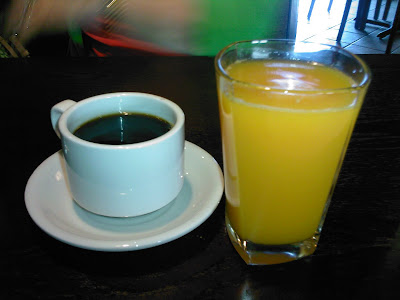 VM went with the apologetically un-photogenic pancakes: local blueberry, rasberry, and strawberry compote.  While she really enjoyed these large cakes with the surprisingly crisp exterior, I would have needed a vat of maple syrup to go along with them (I heart syrup).  I do want to mention that while I usually don't butter my pancakes, the butter was surprisingly good; could it be housemade?


Ever on a quest to duplicate the retired frittata florentine from Counter, I chose the tofu benedict: hollandaise sauce, smoked tempeh and english muffin served with hash browns and grilled tomatoes.  This is definitely a dish that everyone turns to look at when it's delivered to your table; it is pretty awe-inspiring.  And, much like the cotton candy at the Four Seasons, once one person orders it you start to see almost nothing else coming out of the kitchen. 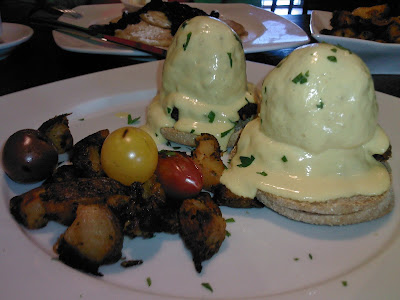 As you can see, the benedict made an impressive cross section.  I've never had the non-vegan version, but the fluffy tofu along with the sauce lent a nice overall creaminess to the extremely rich, savory (tomato-y?) tempeh patties.  I did think a veggie would have been a good addition-- mushrooms or greens-- but there I go trying to recreate the frittatta florentine again.  It was delicious and extremely filling.  The potatoes were a hit but, while I appreciate the use of multi-colored tomatoes (that's a purple one on the left), I really don't like the idea of grilling them.  Warm tomatoes are not my scene; VM had to eat 'em. 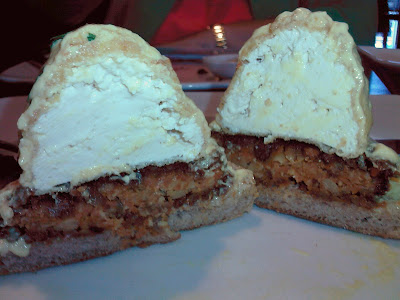 Not ones to shy away from carbs, we ordered an extra side of home fries: carmelized onions because my dish only came with a few and VM had none (gasp!).  Crispy and lightly seasoned; they were very good. 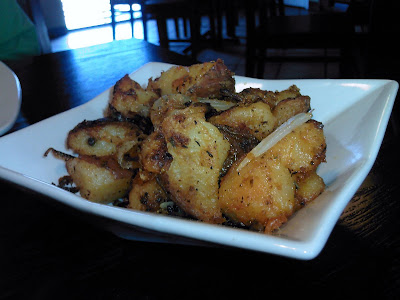 Note to ketchup lovers, don't forget to ask for ketchup because it doesn't come with (you might need two if you're a fiend like me). 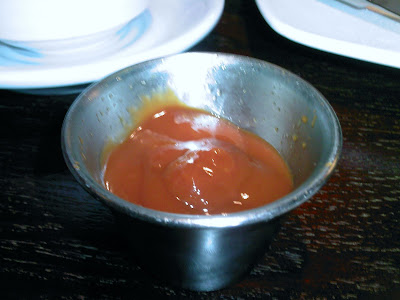 Finally it was time for dessert.  These are the housemade donuts: sugar & cinnamon that had enticed me to visit for dessert brunch in the first place.  They were airier and less cakey than I expected, but delicious.  If you have one leftover I'd suggest heating in the toaster for a minute or two. 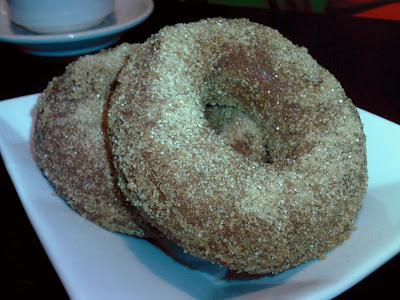 Next we went with the cookie plate.  The cookies in the back were some sort of cornmeal cookie topped with blueberry compote.  They were crisp and good, but not our favorite (i.e. not too sweet).  The cookies in the center were light, fluffy, supersoft lavender snickerdoodles.  Not completely sure what lavender tastes like, I was afraid it would be flowery; but, these were extremely melt-in-your-mouth pleasant and my favorite of the plate.  Finally, the cookies covered in powdered sugar that look like traditional Mexican wedding cookies were orange pistachio tea biscuits.  VM swooned, but they were not for me; I like more traditional combinations and this was not one. 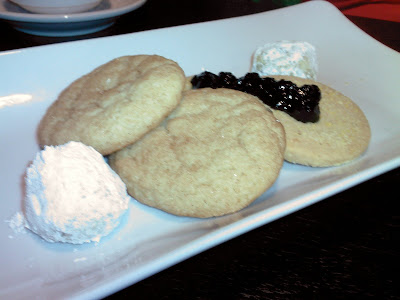 It was a delicious brunch from beginning to end, but we felt the need to return soon after in order to try some of the other enticing choices we hadn't had room for been able to on this visit.
Take two:
On the previous visit we'd both been eying the grilled local zucchini sandwich with charred red onion & frisee, black olive tapenade and hummus, so that was a must.  The bread looked like the "vanilla" version of the delicious pumpernickel that had graced my tempeh reuben on a previous visit.  While equally delicious, it unfortunately failed to form the same neatness pocket and seal around the sandwich filling as I'd experienced with the reuben; so, this wound up being a knife-and-forker.  I cannot stress how delicious this sandwich was, but I would have preferred to have enjoyed it as intended: by the mouthful instead of by the forkful. 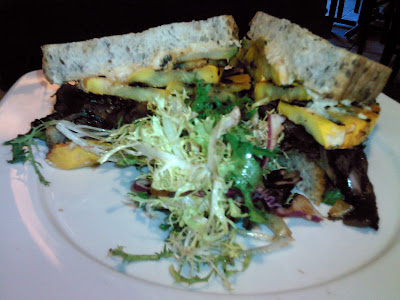 With trepidation I chose the breakfast burrito: scrambled tofu, potato, black beans, avocado, salsa verde and smoked paprika aioli and hoped VM would like it; she's kind of afraid of tofu.  Not only was it delicious and full of all kinds of yummy flavors, but it taught VM us a very tasty important lesson about tofu not judging a book by its cover.  In other words, it turns out that VM really likes tofu scramble!  I didn't have to be convinced and I too thought it was a wonderful and tasty rendition of what can sometimes be a bland and plain menu offering. 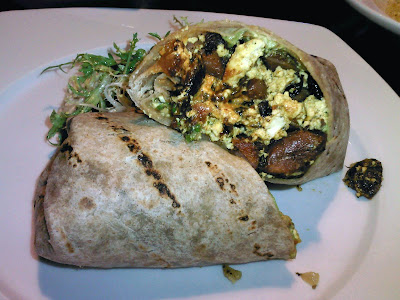 Since both sandwiches came with a small salad, we surreptitiously tried to order the fries from the lunch menu, but it wasn't possible.  Undeterred, we decided to go with one new side and one familiar side.  For the familiar, another batch of the home fries (come on, you can't go wrong with potatoes).  Even though it was only a week later, these were prepared a little differently, but were equally as good.  As a plus, our now favorite waitress Jackie doubled up on the ketchup for us and provided hot sauce.  Thank you, Jackie! 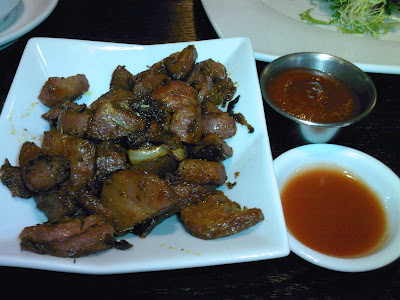 For the new we went with the corn grits: local cornmeal and fresh corn.  My only previous experience with grits was as a kid when I ran out of familiar options ordering the 12 items for the $2.99 Denny's Grand Slam breakfast.  I recall a small bowl of gritty, white mush and up until recently I thought it was the only prepared potato I didn't like; now I know it's made from corn.  Speaking of, get a load of these grits: neither sweet or salty, these would make an appropriate and neutral side dish for any meal, not unlike creamed corn.  I usually mix one can of regular corn with one can of creamed so it's not so runny; these grits were even less so, in addition to having been made significantly more textural from the cornmeal and infinitely fancier by the charred kernals. 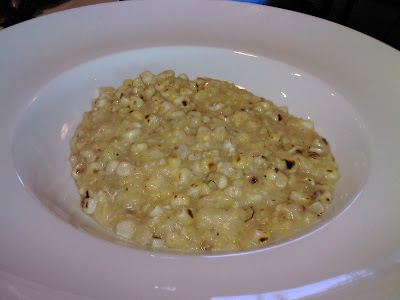 At this point I was really looking forward to having the chocolate cake I'd enjoyed on my first visit.  Unfortunately, they were out (!).  The other options didn't float my boat and we were kind of full, so we decided to share a cookie plate (again).  Jackie to the rescue by personalizing it: omitting our least favorite and giving us extras of each of our picks. 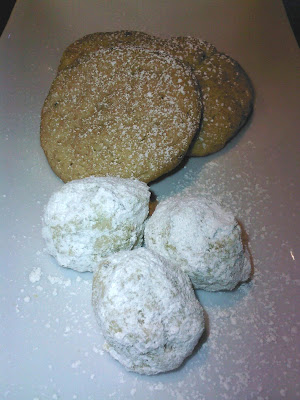 Needless to say, now that we have exhausted most of the menu we will be anxious to return when it changes for the season.
Posted by Abby Bean at 11:00 AM

Email ThisBlogThis!Share to TwitterShare to FacebookShare to Pinterest
Labels: brunch, Sprig and Vine