After visiting the Rutherford Pancake House, our next stop was Sweet Avenue Bake Shop, the all-vegan cupcakery in Rutherford, NJ.  I went for the first time over a year ago, but the experience was so unexpectedly underwhelming that I was never able to bring myself to blog about it.  Now that I've made another trip I feel more comfortable sharing my observations.

The first time I visited Sweet Avenue I was a bit googly-eyed over the thought of an all-vegan cupcakery, and the adorable website and the owners' witticisms on Twitter (twitticisms?) and Facebook didn't hurt either.  So, I was surprised and disappointed that all three people in the shop that day were barely friendly.  It was like seeing the man behind the curtain and he was indifferent.  To make matters worse, I had two omnis with me who were obviously affronted by the incongruity of the bright, kitschy shop vs. the wholly unwelcoming atmosphere.

On top of this, we were conducting a major taste test between the three of us, and the shop was out of (disposable) utensils.  This made sharing a bit of a problem, and not one staff member offered us any assistance whilst we messily attacked our cupcakes with but one large plate, a few napkins, and our fingers.  Perhaps they could have offered to split our cupcakes in the back or at least provided us with more appropriate plate-age in order to make our bounty more enjoyable to consume, but they didn't seem at all interested.  In fact, they were so dis-interested in us that we dared not ask. 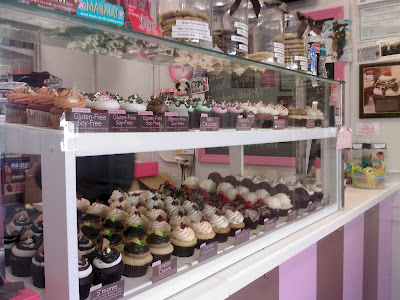 On that visit, between the three of us we ordered about eight cupcakes and were wholly underwhelmed by all but one: the Old Skool.  Luckily, this vegan version of the traditional Hostess cupcake was so stupendous that it alone made the trip worthwhile.  It and the four more of the same that I took home with me.  But the other flavors?  Eh.  The cupcakes were all stunningly decorated and the presentation was immaculate, but the flavors were nothing special: run-of-the-mill cupcakes.  The most egregious offense, however, was the fact that the "special" cupcakes each boasted being filled with a certain something (preserves, cream, etc.), but the "filling" was barely noticeable.  Besides the Old Skool (served Tuesdays & Thursdays for those of you interested), we all left extremely disappointed.

Luckily, this recent visit was infinitely more successful-- at least as far as my taste buds were concerned.  I wish I could tell you differently, but once again we were barely greeted; the service was lethargic at best.  I realize that it's ridiculously laborious to run your own business, but many other establishments in similar situations (young people, small but busy storefront, etc.) still manage to consistently extend a welcome and appreciative attitude to all customers throughout the day.  Lula's Sweet Apothecary is the absolute best example of this; in addition to their awe-inspiring product quality and selection, the employees (owners and every member of the staff) always manage to exhibit behavior that conveys a gratefulness for your business and your company; they are happy you are there and so are you!  Vegan establishments are often destination spots, so the service and atmosphere are just as important to the experience as the goods.

On this visit, the cupcakes looked just as delectable, but my wariness prevented me from choosing more than two.  Because the welcome vibe was practically non-existent and the seating area was even less inviting than it had been upon our first visit, we decided to take our booty to-go (granted some didn't make it past the pink bench outside the store). 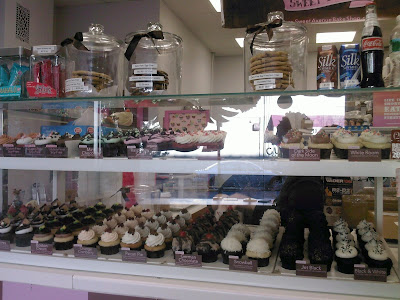 Despite it being mainly a cupcake shop, to my surprise the cookies looked incredibly appetizing; I couldn't resist choosing one of each.  The chocolate chip cookie was big, soft, and filled with chocolate chips: can't go wrong with that. 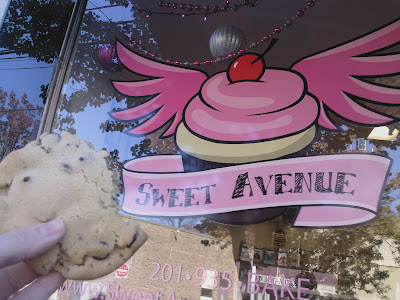 The white chocolate macadamia cookie was generously filled with macadamias, but extremely light on the chips-- maybe because white chocolate chips can be kind of sucky?  There was an unexpected flavor (coconut?) that made it inauthentic, but it was still a tasty cookie. 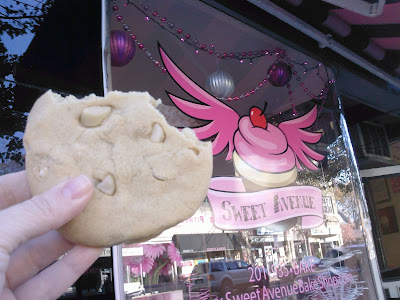 Finally, I couldn't resist trying the chocolate peanut butter cookie.  I know that as a result of my insatiable appetite for peanut butter I'm often disappointed by the minimal peanut butteryness of such items, but it's cookies like these that make the arduous taste-testing worthwhile.  Super chocolate-y, dotted with chips, and swirled with surefire peanut-butteryness; this was my absolute favorite of the three. Unfortunately VM isn't a fan of the chocolate/peanut-butter combo (I know; it's horrifying), so I had this one ALL to myself. 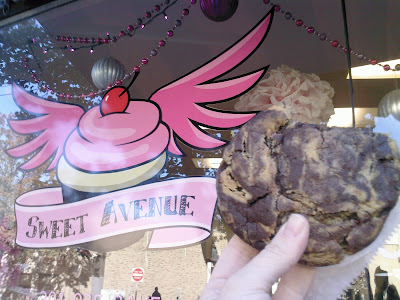 Somehow, VM managed to spy a small case of giant mixed berry crumb muffins off to the side of the shop and she added one to the haul.  I'm not a huge muffin fan- especially in a cupcake shop, so I wasn't at all interested.  Imagine my surprise to find that the muffin was literally my favorite thing and perhaps the most delicious muffin/crumbcake hybrid ever!? 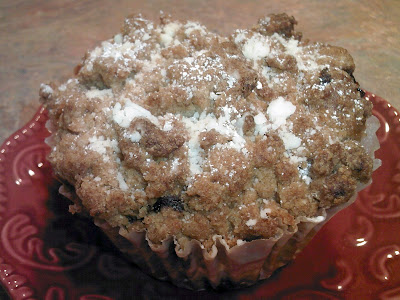 The muffin part was perfectly textured, ridiculously moist, and filled with assorted berries.  The top was coated with the absolute most authentic crumbcake crumb-age I have encountered in any vegan baked good.  I would literally go back just for one of these muffins. 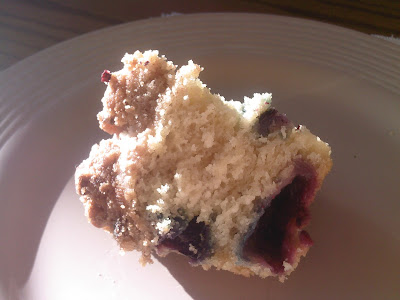 And finally, the cupcakes.  First was a s'mores cupcake: chocolate cake with marshmallow frosting, marshmallow filling, and topped with a graham cracker. 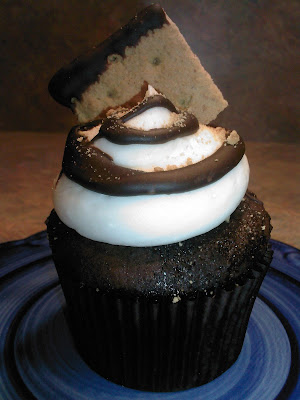 The plain chocolate cake was topped with gratuitously super-sweet frosting that was not specifically marshmallow tasting at all.  I was further disappointed that the marshmallow "filling" was simply more of the same frosting, but at least there was a decent amount of it.  The best part about this cupcake was the choco-dipped graham; the rest of it did not impress. 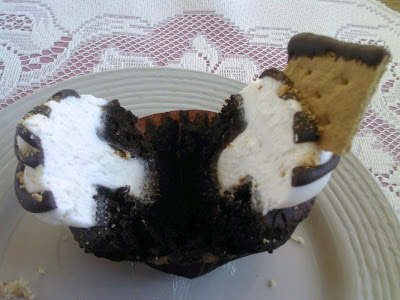 Next was the cupcake of the day, pecan pie: butter pecan cake filled with pecan pie filling, topped with brown sugar frosting.  This cupcake was outstanding. 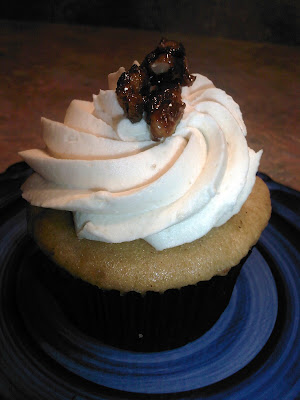 Unlike every other cupcake I've tried at Sweet Avenue besides the Old Skool, this specimen boasted inventive flavor rather than boring, nothing special, totally basic cupcake ingredients; this was what I'd been expecting of the specialty cupcake shop.  The cake was moist, buttery, and flavorful; the icing was sweet without being cloying; and the pecan filling and topper was perfectly prepared and proportionate to the cupcake.  Everything worked together in a delicious, autumnal specimen of cupcake goodness. 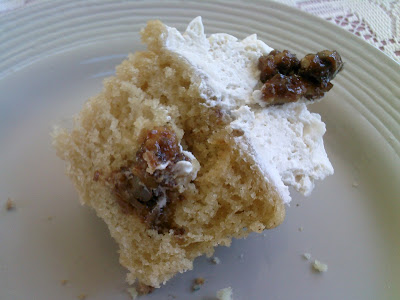 I suppose the bottom line is, when you visit a sweet shop and don't like what you order: try, try, again.  As a result of the atmosphere I certainly wouldn't go out of my way to frequent this place often, but it's nice to know that there are goodies to be had when I do.
Posted by Abby Bean at 7:39 AM