John's of 12th Street is a NY institution that has been serving fine Italian food from the same historic location for 102 years.  About a year ago they decided that they wanted to add a vegan menu so that families and groups of friends could all enjoy a meal in one place.  But instead of throwing a portabello cap on the menu and calling it a day, they hired holistic nutrition chef, Rena Unger, to spend about a year developing a completely vegan menu that includes soups, salads, appetizers, pizza, pasta, mains, sides, desserts, and even coconut milk creamer for coffee/tea.  The result is the most respectful and all-inclusive menu I've ever seen offered to vegans at a traditional restaurant. 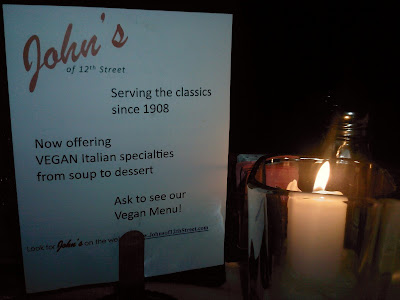 A good vegan friend and I decided to give it a try Saturday evening at around 8:30pm; the place was packed.  We met one of the owners, Nick, who was acting in the capacity of host; he seemed to know every diner in the room.  The wait wasn't terrible and, as we tried to stay out of the way of the efficient waitstaff, we passed the time trying to determine if any of the other diners were vegan.

Despite how busy he was, when it came time to seat us Nick formally introduced himself and, with sincere friendliness, asked us our names, where we were from, and if we'd ever been to John's before.  When we told him we had come for the vegan menu his eyes lit up.  He explained that they use all separate utensils and cooking surfaces to prepare the vegan items, and even went on to point out which wine and beer varieties on the menu are vegan acceptable (they also have a full bar).  I was already in love with the place and I hadn't even tasted a bite!  As if I wasn't already swooning, he then shared various tidbits of information about the historic dining room in which we were seated.  The decoration includes individually hand-laid floor tiles, mounted canvas murals, and imported marble walls; the lore involves talk of a second floor speakeasy during prohibition.  He unequivocally made us feel like revered, invited guests.

Now let's get to the really good stuff, the food.  For an appetizer we decided to share the bruschetta: garlic-grilled bread with avocado, basil and tomatoes.  It was extraordinarily rich and decadent in the most wonderful way.  Not even close to the boring standard tomato and bread usually offered to vegans, this bruschetta was instead an extremely well-planned and immaculately executed dish that I anticipate will be irresistible on all future visits.  And, judging by the frequency with which we witnessed the dish being served around us, we are not the only fans. 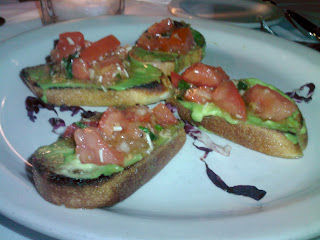 As carb fiends we couldn't help but to also order garlic bread to enjoy with our meals.  Perfectly toasted fresh bread with just enough butter and garlic; it was an authentic, guilty pleasure.  When was the last time you enjoyed garlic bread out at an Italian restaurant?  Delicious!  I'd venture to suggest a mozzarella Daiya covered version, but dare I be so gluttonous?  Yes, I dare. 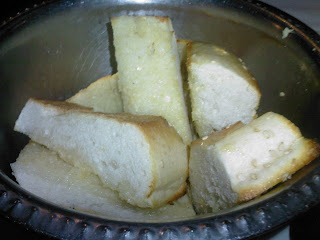 After the two of us had scoured the lengthy menu for what seemed like days, my dining companion ordered the seitan parmigiana with Daiya cheese for dinner.  It was incredible (of course I tasted it) and he guessed that the seitan was homemade.  Not surprisingly, Nick confirmed that it absolutely was; John's is not fooling around with us vegans! 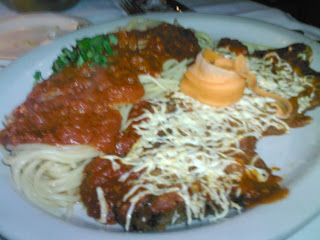 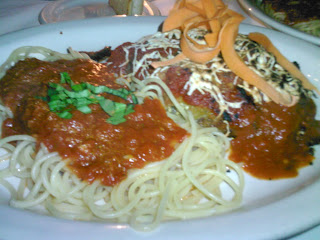 Overall: completely delicious!  VM has since enjoyed my leftovers and confirmed, so don't just take my word for it.

Much to our surprise, Nick was kind enough to formally introduce us to the chef, William Heras, who was incredibly humble for a man who, after 37 years of successfully preparing traditional Italian fare at John's, added a full vegan menu to his repertoire.  The idea, creation, and ultimate execution of this menu was no easy feat and it was heartwarming to meet one of the key players to have made it happen.

At this point I was beyond sufficiently stuffed, but there was a vegan cannoli on the menu; how do you resist that?!  You don't.  My companion agreed to share and we were very glad we did. 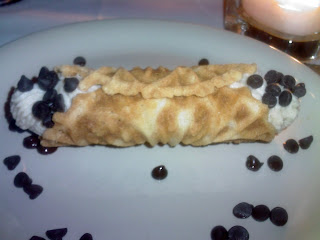 Served in a thick, waffle-y shell this was the most authentically cheesy tasting vegan cannoli I've yet to meet.  As a bonus, it was generously sprinkled with chocolate chips which, as a result of the warm plate it was served upon, melted upon fork impact. 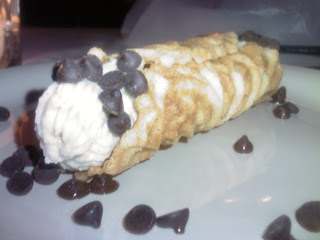 For those of you who aren't cannoli fans, along with a number of other items you can also choose Lula's Sweet Apothecary ice cream for dessert!  And really, in a perfect world wouldn't every restaurant serve Lula's?

I would be remiss if I did not mention the waitstaff at John's.  These gentlemen are professional waiters in an extremely popular restaurant and they manage to maintain their efficiency and good humor despite the demand of the crowds.  Most importantly, not one of them gave even the slightest indication that we were unusual or unwelcome.  We've all been the vegan in a "regular" restaurant where eye rolls, snickers, and lack of accomodation are the norm; not here, my friends.  The warmth of the staff made us feel extremely welcome; we were special guests without being a spectacle.  With gratitude I applaud them for both the respectful atmosphere and the authentic fare.

If it sounds like I'm gushing, it's because I am.  If given the choice I always choose to dine at an all-vegan establishment versus a "regular" or even vegetarian one.  However, for a traditional restaurant to welcome vegans in such a thoughtful and thorough manner, I couldn't resist giving them a chance and I'm so glad I did.  Whether you're looking for a restaurant to accomodate a group with mixed dietary restrictions, or you're just curious about their offerings: vegans, it's time to give John's a try. 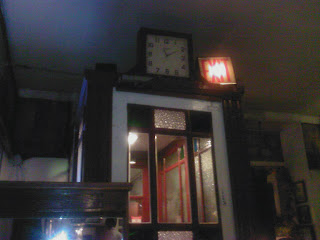 Consider their vegan menu your personal invitation.
Posted by Abby Bean at 7:37 AM

Email ThisBlogThis!Share to TwitterShare to FacebookShare to Pinterest
Labels: John's