In an effort to divert attention from themselves, when eating in mixed groups, lots of veg-heads say, "Don't go to any extra trouble for me; I can just eat the side dishes."  Most of the time, they are lying.  Who wants to eat sides for dinner- especially since, in all likelihood, they are filled with unnecessary animal products.  Well, not at my family's Thanksgiving.  I do want to eat all sides for dinner and, while VM still allows turkey to be served at her table, everything else is vegan.  Not vegetarian, VEGAN.  That's how she rolls.

Since she was planning a separate day-after-Thanksgiving feast, this meal was to be simple and delicious.  I don't know how simple it is to be cooking six things at once, but she definitely hit the delicious mark. 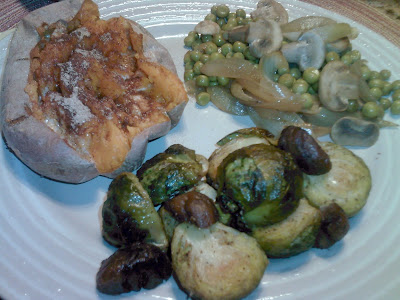 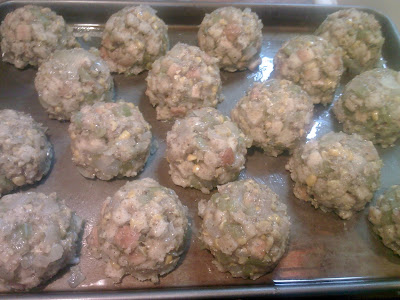 VM has worked tirelessly over the last decade to veganize all of her vegetarian specialties, but the knack for keeping her stuffing in the shape of balls without eggs has eluded her...until now.  Thanks to www.veganbaking.net and chia seeds we enjoyed our first stuffing balls in years!


All was going well until I decided to make some cookies.  I broke out the butterscotch chips I'd been saving and began looking for a cookie recipe that would be the appropriate vehicle to transport them into my mouth. 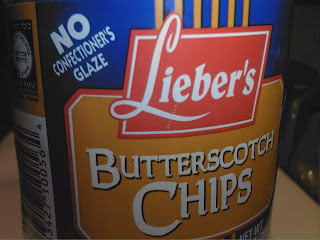 I decided on Veganomicon's rumnog pecan cookies (p. 238-9) and started off by toasting the pecans because I thought it would be a nice touch.  I burned about half of them: severely.  I should have quit then, but I didn't.

Instead of rolling the cookies in pecans, as the recipe suggests, I added a halved amount of them directly to the batter; the other half was made up of butterscotch chips.  The only additional substitution I made was Bacardi for dark rum.  To say that the first batch didn't rise would be an understatement; they merely oozed. 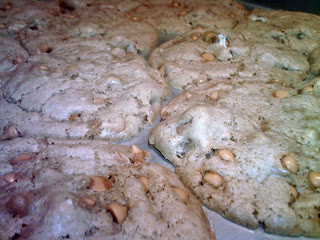 After that, I added flour, baking powder, baking soda- whatever I could think of to initiate a poof of some sort.  It was no use; one after another the batches came out just as flat as before. 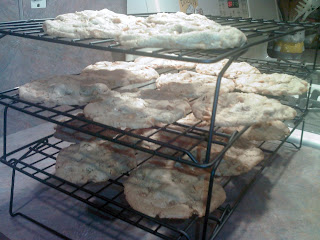 Although they were unappetizingly steamrolled, the finished cookies weren't horrendously inedible.  Well, they weren't exactly delicious either.  And, while the butterscotch chips were generally underwhelming, they somehow managed to overwhelm the cookie with their fake, sweet, not really butterscotchy taste.  They were simply the orange equivalent of  the white chocolate chip disappointment. 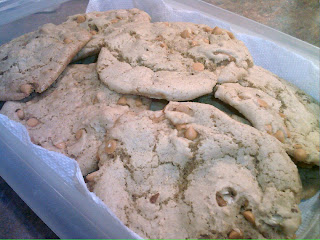 Did I mention that dinner was excellent?
Posted by Abby Bean at 4:10 PM