Conquering the Biggest Head of Cauliflower I've Ever Seen: Korma and Subji

I know better.  Rather than buy the first thing you see at the first stand, you should always peruse the entire Farmer's Market to ascertain all available choices.  But this cauliflower was so awesomely huge that I couldn't resist.  Sure, there were more appropriately sized smaller heads at the stand in the back, but had I known this I probably still would have gone for the biggest for the cool factor alone.  It sat on my desk the rest of the day making all of my co-workers wonder what I was going to do with all of it jealous and permeating my office with its fragrance. 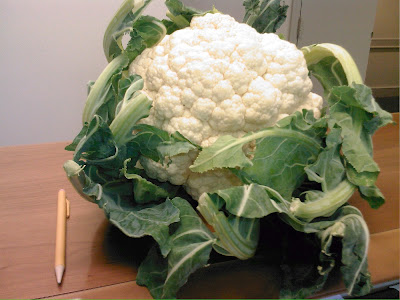 So I came home and hit the books: the indexes of my arsenal of cookbooks, that is.  I quickly decided on a recipe, but once I started washing and cutting the cauli it became clear that I should make more than one-- not only because there is a limit to how much of one thing I can eat, but also because even my most gargantuan frying pan could only contain half of the florets.  My ginormous colander couldn't even harness it all; it was quite intimidating.

I started out with Tempeh Vegetable Korma from The 30 Minute Vegan's Taste of the East (p. 30-31).  I didn't have any tempeh, but I did have three times as much cauliflower (half of my booty) as the recipe called for so I figured it would be okay.  I didn't have any coconut milk or soy yogurt either, but since I really wanted to make the recipe I improvised with extra cashew "cream" (cashews bulletted with soy milk) and some coconut shreds thrown into the mix. Instead of chilis or red pepper flakes I subbed sambal olek: gads of it.

I doubled all of the other recipe ingredients and added 1/2 bag of frozen peas.  I also subbed fresh parsley for the cilantro (blech).  Because somewhere during the cooking frenzy course of the evening the line between Indian korma and Thai curry blurred, I inexplicably added a large sweet red pepper, more onions, and a can of baby corn.  Potatoes would have also been phenom and considerably more appropriate, but the hour was getting too late to begin washing and peeling. 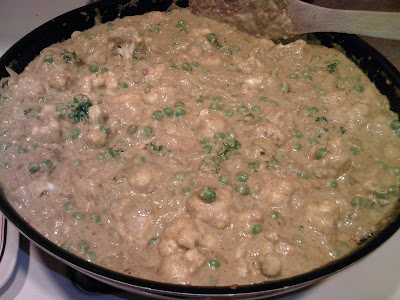 The finished dish was extraordinary: thick, rich, and decadent-- almost like a Divan-- and not even very spicy (I will fix that).  You can add water as you're cooking to customize how thin you'd like your creamy  sauce to be, and you'll also need to add water when you reheat in order to loosen things up.  I served over Jasmine rice, but naan wouldn't hurt. 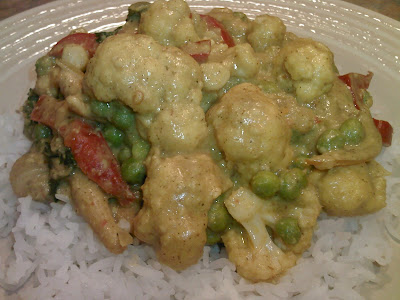 The sun long since down, I was ready to tackle Cauliflower and Peppers (Gobhi-Mirch Subji) from The Indian Vegan Kitchen (p. 93).  Having used my only pepper, I instead added one small white and one small purple/white eggplant.  I am never successful with eggplant and I could see right away that things were not going to be any different with this particular dish.  Then, when it was almost done, I decided that the flavors were much too similar to the Okra with Onions from the same book; so, I improvised.  I added one small can of tomato paste, a bag of frozen, chopped spinach, and lots more of the same spices I had already used.  Note: I also had to de-glaze with water extremely often while cooking. 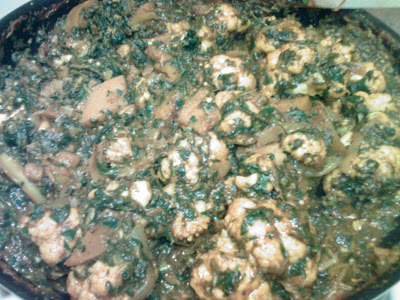 I decided to forego the rice and instead served the mixture over potatoes pan-fried with minimal oil. 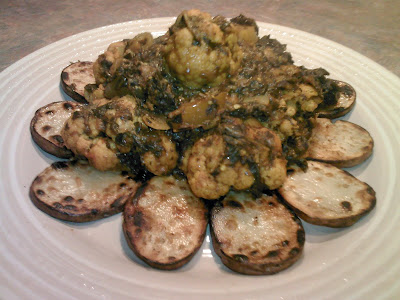 For those of you keeping track, I started tackling the giant cauliflower at 8:00pm and it wasn't until 10:43 that I was finally looking at this, which became dinner and leftovers for 9 additional meals. 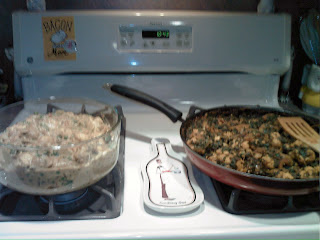