Wanting to try something healthy different and healthy new to most of us (okay, just me), friends and I recently decided to visit Quintessence, an organic, vegan, raw restaurant in the East Village.  The place is serene and small, but although it got crowded we never felt cramped. The atmosphere is calm and relaxed; even though it took us quite a long time to decide, our pleasant waitress was extremely patient with us.

﻿﻿
﻿﻿We went for brunch, which comes with hot tea and a salad.  A good deal, but none of us could help but to salivate over the rest of the considerable menu offerings; based on options alone we were all ready to return for a second visit before having tasted anything.

One friend decided on the "Fofu Benedict: 2 Slices of our tasty sprouted kamut bread topped with walnut herb sausage, avocado and fofu. Smothered with mock Hollandiaise sauce and caramelized onions. Served with mixed mesclun and your choice of dressing." 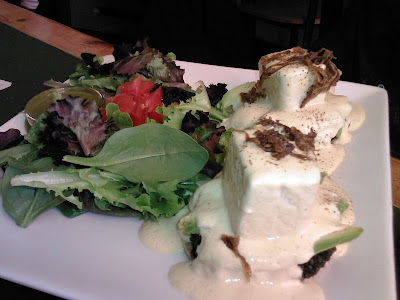 Raw, vegan, eggs benedict?  Yup!  The fofu was smooth and delicate- very much like an egg white, but without the cruelty and general grossness.  I suspect black salt had a hand in the eggy taste and, overall, the dish really did, impressively, taste like a rich but healthful benedict. 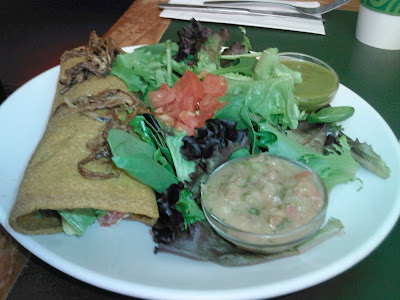 Besides being the most visually appealing dish at our table (my poorly lit photo doesn't do it justice), the contrast of the different, fresh tastes and textures were great.

I had the "Potato Pancakes w/ Apple Sauce and “Sour Crème”: These hearty, delightful pancakes are made with sweet potato, walnuts, zucchini, and chopped onion, served with home-made apple sauce and coconut based “sour crème”. Better than the original! Served with a side salad." 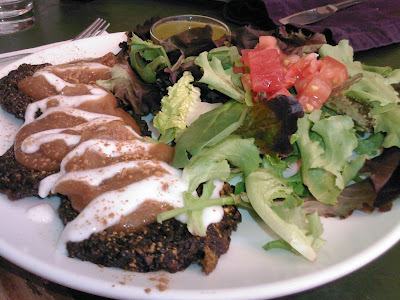 Ok, I admit it; my dish looked the most boring out of all of them.  But, don't be fooled; it was delicious.  Ironically, the latkes seemed a little well done in a good, crispy way.  I wasn't quite sure how the apple sauce/sour cream combo was going to go over, but it was a really nice mixture that made the dish that much better.

I don't know much about raw food and I tend to shy away from it because, besides just generally loving junk food, I also like my cold foods cold and my hot foods really hot.  I have to say that this was a 100% non-issue; there was nothing about any of these meals that left me thinking they'd be improved by a temperature change.  In the past, I've found macrobiotic food wholly bland and boring.  Not so with raw; these dishes were all tasty and absolutely inventive, fresh without being earthy.  A return trip is already in the works.
Posted by Abby Bean at 11:42 AM