If you're like me, you've heard tell of incredible vegan and vegetarian food festivals and expos across the country and wondered, "Why not NY?"  Well, Sarah Gross thought the same thing, but did something about it: spearheading the first NYC Vegetarian Food Festival this past Sunday. 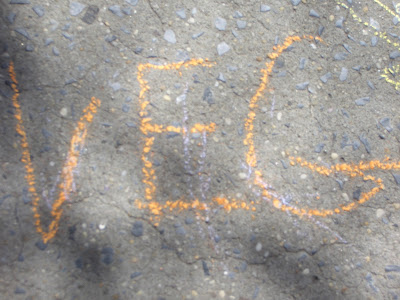 From the beginning it was advertised as a free event, but the week prior there was some confusion when buzz about VIP tickets started making the rounds.  The bottom line was that general admission was, in fact, free, but VIP tickets would get you expedited entry and more.  I chose not to purchase tickets to the free event.

We arrived at 10:15, fifteen minutes after the event was to have opened.  We approached from 6th Avenue, and the line looked average.  There were no signs posted, but luckily someone already waiting in the line quickly informed us that it was actually the VIP entry line we'd encountered, the general admission line being opposite.  When I tried to confirm with one of the security guards he grunted and motioned likewise with his head.  Oh how I love when people are rude and unhelpful for no reason!

In direct contrast, I was happy to turn around to find the venerable Cinnamon Snail parked right at the entrance to the fest, in all of its vegan splendor. 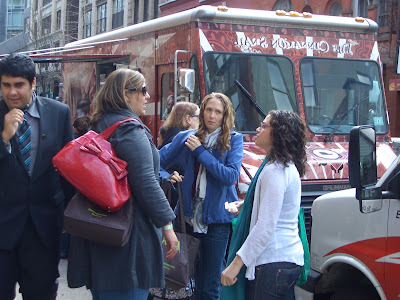 Smiles and happiness there are a constant, and the pastry case was more incredibly stocked than ever. 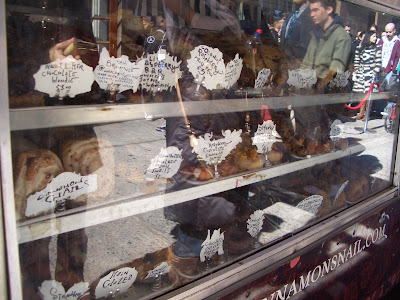 We immediately tried the new version of our favorite apple cider donut to confirm its continued yumminess- check!  So immediately, in fact, that they missed their photo opportunity.  I could spend the day eating my way through at The Cinnamon Snail, but at this point I glanced in the direction of the ominous general admission line and suggested that VM hop on while I acquired a few additional snacks from the adorable crew.


When I proceeded to join VM on line I was surprised to find her all the way at 7th Avenue; that was some long line!  But everyone was excited, the sun was shining, and we had some Snail goodies to fortify us; we dug in for what we assumed would be a nominal wait.  In the meantime, the maple glazed with toasted coconut donut was as delicious as I remembered. 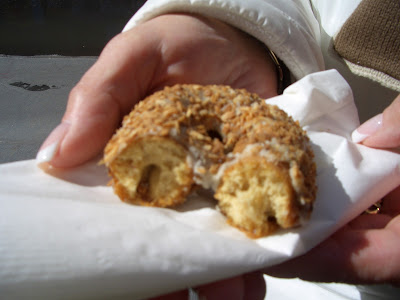 The cannoli was an unexpected treat: super crunchy shell filled with a cheesy cream jam-packed with chocolate chips...as it should be. 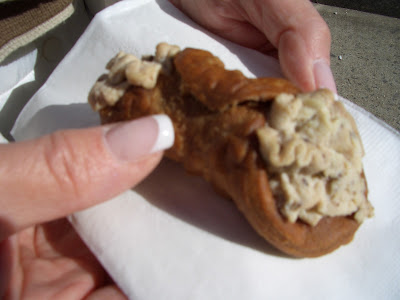 Once an hour passed, a vibe of animosity surfaced- with people wondering aloud about the fairness of the two drastically disparate entry options: the elite, $50 option, vs. the free one, which had thus far created a line that extended around the avenue and down the next street.  The consensus seemed to be that a fair, nominal fee for everyone, about $5-$10, would have been the most equitable way to handle admittance, as well as to organize the crowd.  Eventually a little girl in front of us began decorating the sidewalk with her chalk and the tension was eased. 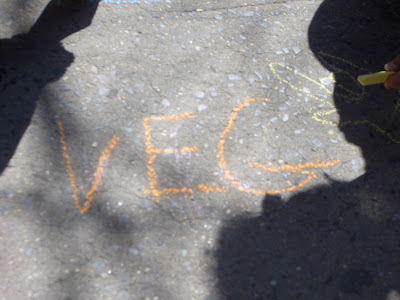 A couple in front of her joined in, and began teaching those nearby some of the signs for animals in sign language. 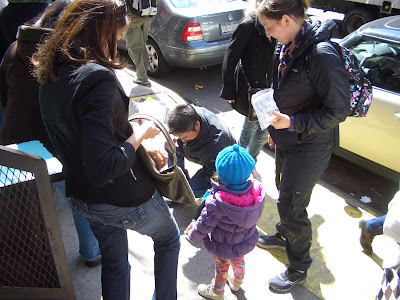 The wait continued pleasantly until someone- presumably from the Altman building- began walking down the line barking at people not to block shop entrances and accusing us of preventing customers from entering businesses.  First of all, there was no one beating down the doors to these places.  Secondly, the mob scene of vegans was the most action these shops have seen since the Bust Craftacular.  Thirdly, no need for rudeness, fella!

The view at that point in front of us: 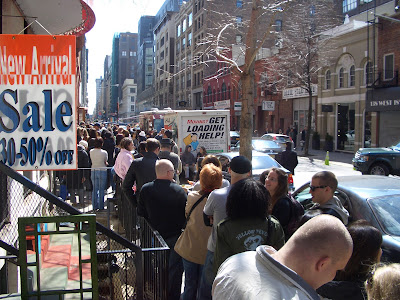 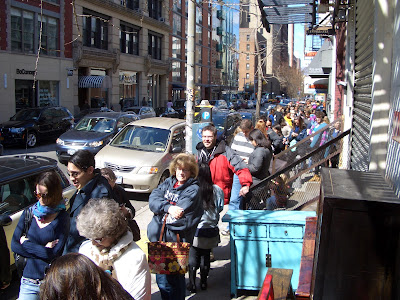 This same unpleasant man reappeared after we had waited an hour and a half and were mere yards from the door: discouraging us from remaining in the line!  He tried to convince us that the wait would be another hour and a half, which was an absurd statement given the fact of how close we were.  Further, what kind of person attempts to turn away people so anxious to enter an event that they have already waited almost two hours to attend?  Not a nice one, that's who.

As we finally entered the comically disproportionate 20 foot area of velvet rope at the head of the line, I believe we all felt a sense of accomplishment.  But then we witnessed a discouraging sight: people arriving, grimacing at the now monstrous line, making contact with someone inside, and being escorted right in.  You know, "people whose time is worth more than yours".  That certainly explained why the line took so long.  A friend has since dubbed the rest of us- the hoards who actually waited in the line- the "insignificant vegans".

When we (finally) excitedly entered we were handed a Whole Foods shopping bag, presumably to collect all of our samples and purchases, and began to make our way around.  First impression: mob scene.  Second, fire hazard?  The exterior tables were crowded but navigable- seemingly because they were informational tables (Mercy For Animals) and tables selling snacks (V-Spot).  But once you got anywhere near a table offering food samples, the crowding was oppressive.  Note to event coordinators: vegans + love of free food = mass chaos. 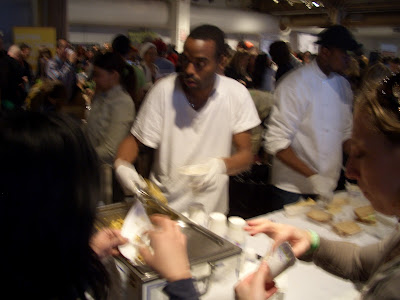 Then I quickly bought a Peanut Butter Pit Bull because really, who can resist? 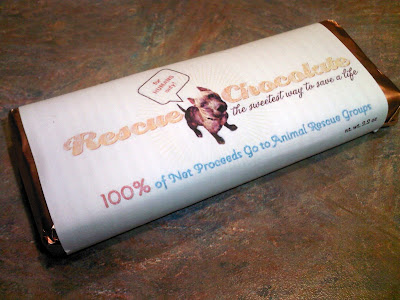 The fine folks of Foodswings were in the spirit, selling incredible looking meatball heroes, mini-cakes, etc. 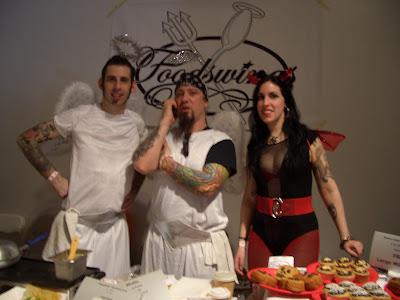 We were hoping to catch Terry Hope Romero's demonstration, but the measly six (!?) "audience" chairs in front of the stage were positively crushed by a mass of standing people with the same interest, so we listened for a bit and moved on before we could be any more claustrophobically enveloped by the crowd.  It was still cool to see her in action, though. 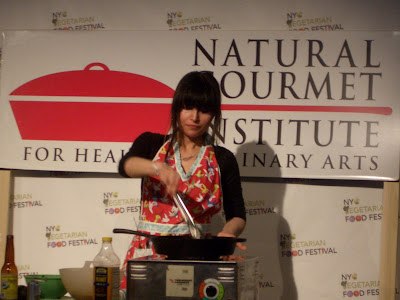 At this point a rumor started going through the crowd that the sampling at many tables had ceased, with companies such as Organic Nectars deciding instead to charge $1 for a sample, I Eat Grass $5 for a small cup of mac.  While I fully support a minimal sampling policy and don't necessarily have a problem with a no sampling policy, changing course mid-stream seemed an inequitable, disjointed decision.

Unfortunately, there were way too many tables that we couldn't get anywhere near- such as Chicago Soy Dairy: blame the tight quarters combined with samples of nachos, mozzarella sticks, pizza, and hungry vegans.  Peanut Butter & Co. had an unfortunate location in an end corner, choked with people who were trying to get out of the aisle while masses were continuously streaming in.  I'm sure many people who wanted to take advantage of the incredible deal of 6 jars for $20 couldn't manage to get near enough to do so; I know I couldn't.  And was Sacred Chow there?  I thought they were expected to be but didn't see them.  It was so crowded that I wouldn't be surprised if they simply remained hidden from my view.  Actually, I'm sure there were plenty of exhibitors missed because the considerable crowd was so prohibitive.  And I didn't have the energy to make repetitive loops of the venue because, despite the doors being open, the temperature inside was stifling; we were quickly ready to go.

But we couldn't leave without visiting Sweet & Sara, despite how daunting the ginormous crowd surrounding her booth seemed.  Eventually, through a delicate balance of waiting our turn and squeezing into breaks between people, we reached the table.  A tremendous fan, VM positively shrieked.  Sara and her unparalleled generosity had struck again: her huge table was entirely covered with samples of whole marshmallows, hunks of rice crispy treats, wedges of s'mores, and chunks of rocky road bark. 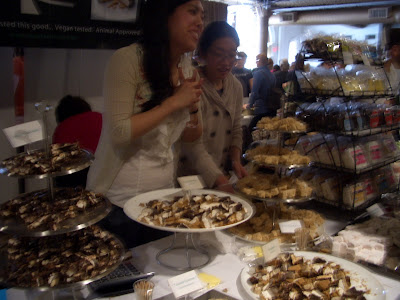 In addition to the massive free offerings, there was plenty for sale.  I hope that she had a monetarily successful event because, from what I witnessed, people were treating her table like their own personal buffet!  It's hard to resist, I know; but, come on.  Act like your mama raised you right!  I have since placed my order online because my desk is a much less hectic setting than the fest was, but I did manage to make an in-person purchase of the coveted Peep-like, sugar-coated Peepers & Skippers!


And then, finally, we escaped back into the fresh air.  It turned out that we had spent less than half the time in the event than we had spent waiting on line for it.  As we caught our breath- we had taken only two steps outside the venue, an unnecessarily nasty security guard barked at us not to block the sidewalk and to move along immediately.  We were offended and disgusted, but there was some measure of satisfaction to be had in the consistency of their unpleasantness from before to after the event.

As we walked away, we couldn't help but notice that the line stretched significantly farther than it had previously.  The same man who had attempted to discourage us earlier was still at it- telling the crowds that there was no way they'd make it in- impossible considering there was still 5+ hours to go, and he had since enlisted members of the security detail to do the same.  We noticed some folks leave the line as a result; others were undeterred.  I heard that a rumor circulated mid-afternoon that the event had been closed down; as far as I know it never did, but I can guess who started it.

We did notice that many people eschewed the tremendous, slow-moving fest line for the consistent and impressive (but fast-moving) one leading to The Cinnamon Snail.  There is no doubt in my mind that none of these folks left disappointed; it's Snail season once again! 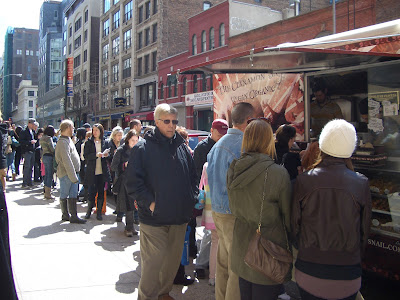 I wish the NYC Vegetarian Food Festival much success, and want to congratulate them on creating an event that was so obviously overdue; the turnout was a testament to that.  I was happy to hear that they are open and appreciative to constructive feedback.  Keeping in mind that hindsight is 20/20, here's mine:

To the event organizers:
To the venue:
Why discourage people who have come to attend an event at your space; what is there to gain by alienating a captive audience?  Instead, set an example for your security staff to be pleasant and helpful rather than discouraging and rude.  This is an issue the festival organizers could not possibly have anticipated and shouldn't have had to; check yourself.

And to attendees:
Ultimately, the consensus seemed to be that the event was a long time coming; people are already looking forward to a larger and improved event next year!
Posted by Abby Bean at 5:25 PM