My first visit to Cowgirl's Baking wasn't exactly a success and I've since learned that I'm not the only person who has received a less than warm welcome.  But, when I recently found myself dining nearby at Quintessence, the consensus of the group was to give them another try; who am I to argue against baked goods?

Luckily there were many more options in the case than had been on my previous visit, but, for the most part, they didn't really look like anything I couldn't make at home.  Sue me; presentation is important (and I'm not good at it).  On top of that, the gentleman behind the counter seemed less than enthused- answering our questions in an even, disinterested monotone. 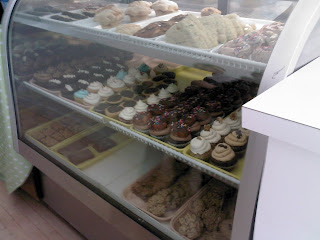 But we had come to give them a chance and, despite my propensity to hold grudges, as soon as I saw the donut-topped cupcake I knew I'd been nudged towards diplomacy.  I mean, it's a donut! and a cupcake! in one! 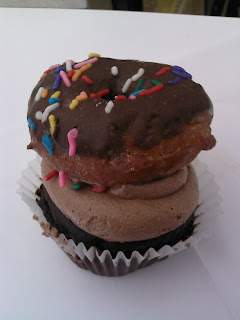 Given the inherent coolness of the donut/cupcake hybrid I would have ordered almost any flavor, but it turned out that the cupcake was mocha.  I don't know what flavor the donut was supposed to be (still didn't after eating it), but I ate it first.  I kind of liked the firmness of the donut's cake and certainly the aesthetic of the glaze and sprinkles, but it didn't have much flavor.  The cupcake itself was mis-shapen and falling apart, so it had to be eaten with a spoon.  But, it had a most pleasant mocha-ness about it and was much tastier than I expected.  Since I'm not a huge cupcake fan in general, this is a big compliment.

My friend got the regular-sized donut which looked more vanilla than mine looked, but was equally lacking in flavor.  For some reason, his donut was unpleasantly chewy in a most un-donut-like way.  Two of us gave it the thumbs down, but he said he enjoyed it. 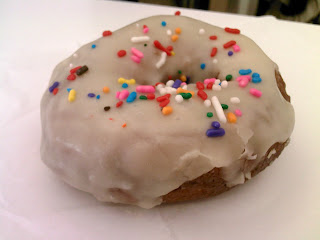 Another friend got the Boston creme cupcake, which was quite tiny.  So tiny, in fact, that we sharers decided to let her have it all to herself.  When I asked her what she thought of it she said it was okay, but not as good as these.  Color me flattered! 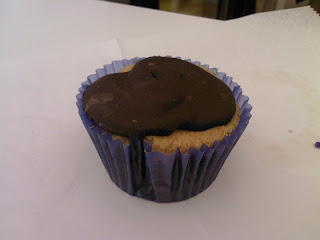 The seating area is cute, but very small and perhaps not the best use of the space; there is a shallow counter with a couple of stools and then an extremely deep window seat.  However, it is the most appealing part of the shop. 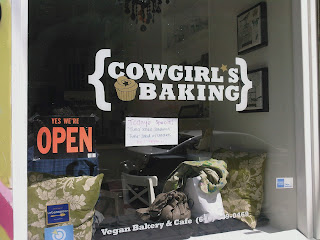 Otherwise, there isn't much decoration at all and the hand-written signs come across as lazy rather than quaint.  The stainless steel burrito bar in the back is stark, not streamlined, and doesn't really blend with the rest of the "bakery".  Spoiled by Lula's propensity towards real silver and glassware, the disposable plates, napkins, and utensils were kind of a buzzkill as well.

Lest you think I am being harsh, it was at this point when the owner walked in from outside.  She neither greeted nor acknowledged the group standing outside deciding whether or not to come in and seemed to make a discernable effort not to meet any of our eyes as we passed her on our way out the door.  We did, however, all manage to get a glimpse of her now-familiar un-enthused grimace.  Yep, same as last time.

There is so much that goes in to making a business work; being welcoming is the easy part...a smile goes a long way!  Not being welcoming, however, can be the final reason that customers do not plan to return any time soon.  Disappointing.
Posted by Abby Bean at 8:41 AM