As a non-vegan kid, I mainly ate meat under duress, but pizza?  Bring it!  Generally it was a take-out pie from the local pizzeria, but for a treat we'd go to Pizza Hut.  For those who might not remember, Pizza Hut used to be an actual restaurant 'round these parts, not just a take-out alternative on par with Domino's.  Sure, it was the kind of restaurant with the foggy, plastic, can't-tell-if-they're-clean soda cups, but whoo hoo: soda and pizza!  There was something about those unhealthy pan pizzas that allowed me to eat more than one would think humanly possible my fair share.

While (pre-Daiya) I've missed pizza, in general, as a vegan (sorry, those cheeseless pies just don't cut it), I've especially missed the pan pizza of my memories.  To recreate?  Daiya to the rescue again. 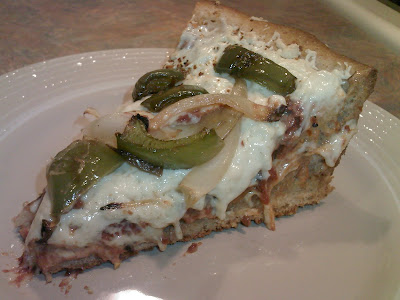 Rather than my standard and now confirmed favorite pizza dough recipe from My Bread, I chose to use the Chicago-style Deep Dish Pizza (p. 58) dough recipe from American Vegan Kitchen because it's specifically intended for use in a cast iron pan, what I thought was the simple secret behind decoding the pan pizza mystery.  The dough immediately proved itself to be more pliable and to possess more stay-puttedness than the elastic dough of the My Bread recipe and I was thinking I was on the right track.  Unfortunately, what I failed to compute was that "Chicago-style deep dish pizza" does not equal Long Island-style pan pizza.  But I digress. 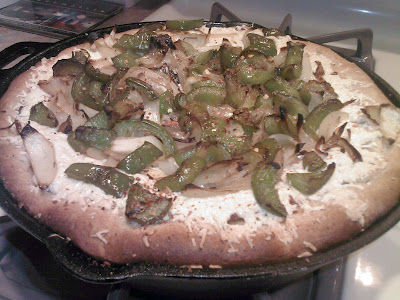 Using different flour and technique from the My Bread recipe, the AVK dough came together quickly and, even though I have an aversion to kneading, the five minutes wasn't all that bad.  It had about the same rise time as the no-knead My Bread recipe, but was much easier to work with.  I piled on homemade tomato-basil sauce, Daiya, Daiya, and more Daiya, sauteed peppers & onions, a generous sprinkle of crushed red pepper flakes, and set it to bake... 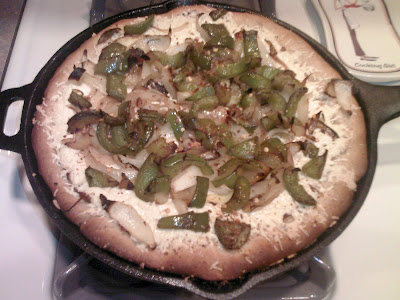 The result was astoundingly beautiful in a way that only a freshly-baked pizza can be; but, as I mentioned earlier, it would seem that this girl from Long Island does not know that Chicago deep dish has more of a crumbly, pastry-type dough than the chewy, perfect, New York crust she's used to.  This isn't bad, per se, but surprising when you are expecting a familiar bite and chew.  So, I'd say that the result was good, but not spectacular...for my Northeastern tastebuds anway. 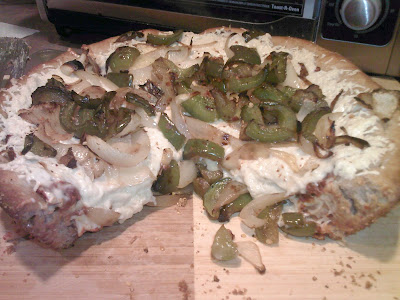 Next time I'll give my standard dough a whirl in the old cast iron and see what happens, but in the meantime I'm still working towards solving the riddle of the Pizza Hut pan pizza.
Posted by Abby Bean at 1:18 PM