You know I can't resist a Groupon, so even though I haven't always been thrilled with Cocoa V, I found myself armed with a coupon and willing to try again.

On my first revisit, Cocoa V no longer had any of the house-baked goods I'd enjoyed in the past, so I decided to go for the Dunwell Donuts: chocolate-coated with peanuts, coconut-covered, and, my favorite of the series, the peanut butter and jelly donut.  They were as good as they look, but I have to admit that I missed the cute mini versions from the launch party with their higher proportion of icing to cake! 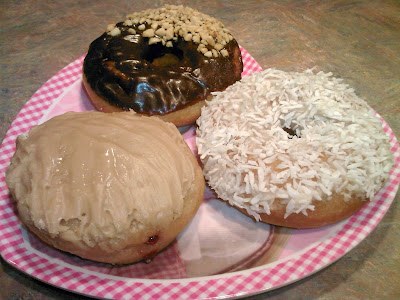 The tiny and heftily priced chocolates at Cocoa V are too rich for my blood, but I had to try the Butterfinger bars I'd heard so much about.  They were thick squares of Butterfinger-like innards surrounded by a considerable dark chocolate shell.  My favorite part was that they were shimmery, having been coated with a layer of golden dust.  They were scrumptious to be sure, but they left an unusual aftertaste in my mouth.  I haven't had a Butterfinger in a long time; maybe that's authentic? 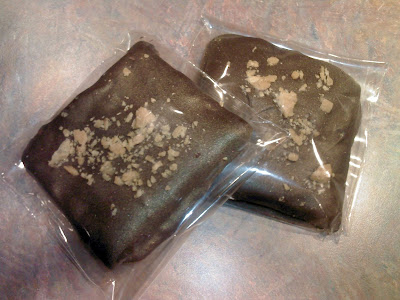 Not long after, I found myself in the neighborhood of Cocoa V once again.  There were no donuts to be found this time and again, no baked goods- save some boring looking cupcakes.  I asked what had happened to the yummy scones, biscotti, etc., and was told that the chocolatier had left a few months ago.  I hadn't realized that a chocolatier would be the mastermind behind the baked goods, but ok.

Odder, though, was the fact that the chocolate options were practically non-existent.  Here I was in a highfalutin chocolate store, looking at this: 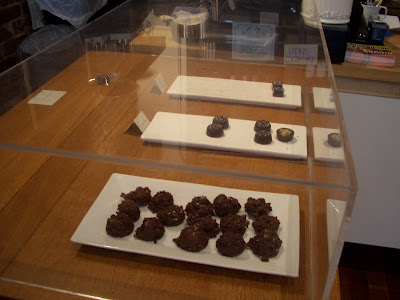 When I asked why the pickins were so slim I was reminded that the chocolatier had left the business...a few months ago.  Hmm.  In theory, I certainly get why this would be a problem.  Buuut, I'm thinking a few months might be long enough to address such a situation- especially in a chocolate shop.  Here I had decided to finally try their artisanal chocolates and the assortment was more starving artist than artisanal.  Drat.

Not to be deterred, I bought a couple of each for a VM/AB taste test. 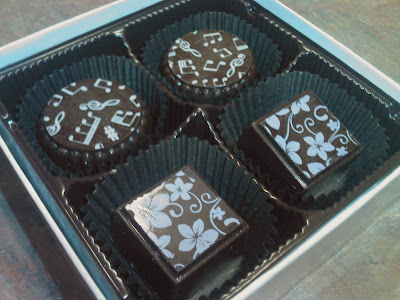 We tried the square, sea-salted truffles first and they were quite good.  Oddly, the round, pistachio ones tasted exactly the same.  I could clearly make out a few pistachio crumbs on top, but I couldn't taste them at all; I guess that minimal amount didn't lend enough flavor to compete with the sea salt.  Ultimately they were both delicious, but not at all different. 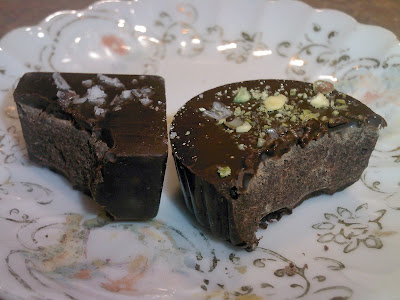 In fairness, the other side of the counter did contain two, full plates of chocolates, but they were from a box.  Did I come to a chocolatier to buy pre-packaged chocolates?  For $4 each!?  Admittedly, they were raw; but, as I'm not a raw-foodist, I couldn't justify the price-tag.  I did ask the counterperson why a chocolate shop wouldn't hand-make all of the chocolates they served and she explained- once again- that the chocolatier had left the business a few months ago.  Le sigh.

The chocolate-covered strawberries looked extremely fresh, although I can't deny I was disappointed when half of the chocolate stuck to the plate instead of the strawberry as the counterperson was packing them up for me.  However, they were as sweet and ripe as they looked- even eaten a day later (see, I do have will-power). 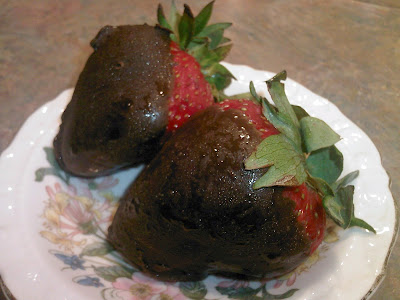 But the best thing I purchased this time- and perhaps ever- had to be these little blobs that I assumed were chocolate macaroons.  Nope; better.  Instead, they were chocolate, peanut butter, pretzel clusters. Yep, you heard me.  And, like the other two chocolates, these were also sprinkled with sea salt; it seems to be the current flavor theme of the shop. 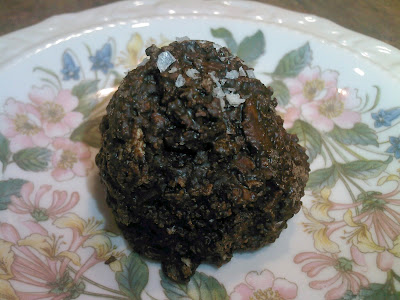 I cannot stress enough how outstanding these were: rich, chocolatey, salty, and crunchy- with a hint of peanut butter.  I have no immediate plans to return to Cocoa V, but I just might try to make these at home. 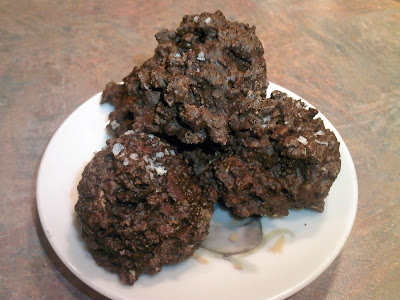 P.S. If you're a vegan chocolatier looking for a job, I think I know where you might find one.
Posted by Abby Bean at 4:38 PM