I recently found myself in an unfamiliar Jersey town that seemed to have nothing to offer me...until I realized that it was the home of the state's lone Loving Hut! 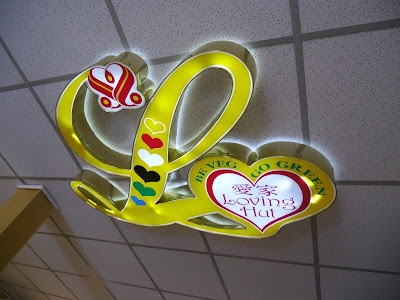 Located on a commercial stretch of highway in a mini strip mall next to a tattoo shop, it was extremely unexpected and we were I was excited to give it a try. 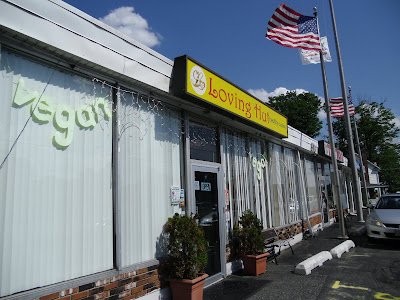 Having never been to a Loving Hut before, I didn't really know what to expect by way of decor.  I'd heard complaints that the environment can seem sterile, but this location- while minimalistic, boasted unexpected, randomly placed, gaudy (yet strangely appealing), seemingly 70's-inspired insignias and a coordinating color scheme.  Of course, there was also the requisite television airing the 24-hour Supreme Master TV, but it was rather unobtrusive.

The thing that really caught me by surprise, though, was the inclusion of a length of fish tanks; why the disconnect? 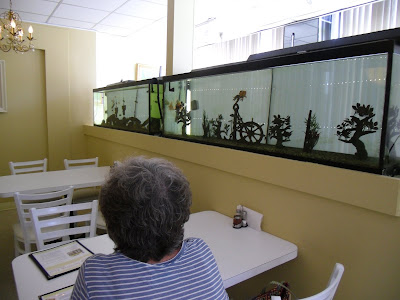 Our server had a managerial tone about him and was very pleasant, efficient, and kindly concerned with what he perceived to be our severe over-ordering (he'd obviously never met us).  He maintained his friendly professionalism even as the restaurant filled up with what seemed like regulars, as well as a Meet-Up group of veggies of various degrees (I wasn't necessarily eavesdropping; my attention was simply arrested when they began discussing cooking with "satan").

The menu contained more than its fair share of soy protein and flash-fried dishes, but there were plenty of other things to choose from as well.  We started off with the requisite spring rolls, called crispy rolls: "crispy roll wrapped with cabbage, jicama, mushroom, carrots, scallions, vermicelli, tofu, soy protein.  Served with sweet & spicy dipping sauce".  For the considerable ingredient list, these rolls were kind of empty and relied on the dipping sauce for flavor. 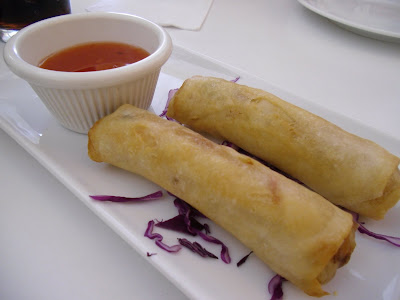 Then we ordered the sushi, nori stars: "seaweed wrap with brown rice, avocado, shredded zucchini & carrots, gomasio.  Served with Wasabi dipping sauce."  When these were placed on the table, the fishy smell was so strong that I, admittedly, glared at the tanks.  Only when I realized it was the aroma of the seaweed did I prepare to taste.  The dipping sauce was unorthodox, as it was not traditional soy; unusual, as it was not smooth; and unappealing, as it was both thick and runny depending on where you dipped.  It was so bad, in fact, that after we each tasted one we could not have another.  Not wanting to insult, we took the leftovers home and were happy to find that with regular soy sauce they were fine.  Not delicious or outstanding, but certainly edible and not wasted; the sauce was the unpleasant culprit. 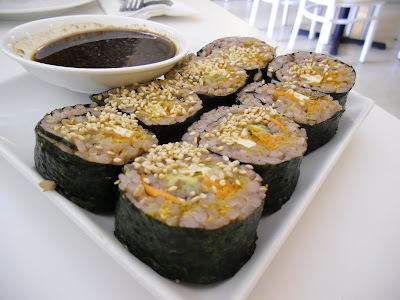 Finally, we chose the Asian festival slaw: "Shredded [white] cabbage & purple cabbage, carrots, cilantro, scallions, and crispy wonton noodles tossed with Asian Zest peanut dressing and topped with vegan shrimps."  For starters, we couldn't eat the shrimp.  The nauseating trifecta of the existence of the fish tanks, the fishy smell of the nori, and the unpleasant sushi sauce already had us at the edge; so, we simply moved them aside.  Luckily, our server and the kitchen were kind enough to exclude the cilantro from the dish even though, due to my involuntary truth mechanism, I readily admitted that I'm not allergic; I just have a severe aversion to it.  I really appreciated their compliance!  The slaw was good, but not great.  Nothing really stood out about it, but we did agree that it was nice not to have had to wash and shred the cabbage ourselves.  The crisp wontons were nice mixed in the salad, as well as dipped in our leftover crispy roll dipping sauce; but, be forewarned: they will severely soggify as leftovers while the rest of the slaw endures. 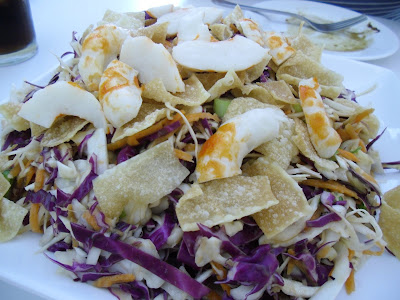 At this point we were feeling pretty mediocre about the place and then they brought out our meals.  One looked more impressive than the next!

No matter what unexpected place she might find it, VM, lover of falafel, cannot resist.  So when she declared that the falafel wrap: "flash-fried homemade falafel patties, lettuce, cucumbers, tomatoes, onions, hummus, and tahini sauce.  Served with seasoned sweet potato fries & coleslaw." was her choice of entree, I wasn't about to stand in her way; after all, this wasn't the most unusual place she's ordered it.  So imagine my surprise when it came out looking superbly appetizing, as well as stunningly plated.  I am embarrassed to say that I somehow erased the "whole plate" photograph, but I think you can tell by these shots how beautifully it was served and how delicious everything looked. 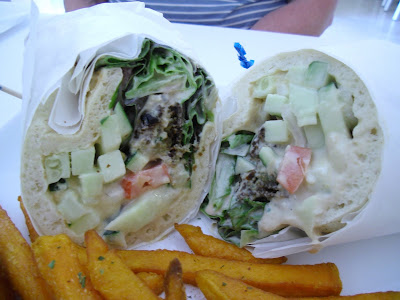 The falafel was perfectly textured and served on fresh lavash bread with all of the listed accoutrements and a generous amount of delicious tahini sauce; it was one of the best I've ever had.  Yes, I had some!  Don't judge me!  VM is very generous with her food!  The sweet potato fries were not at all greasy, handily maintaining their fresh potatoeyness.  The dipping sauce could rival those served at the finest restaurants, as could the delicate, dill cabbage slaw that accompanied. 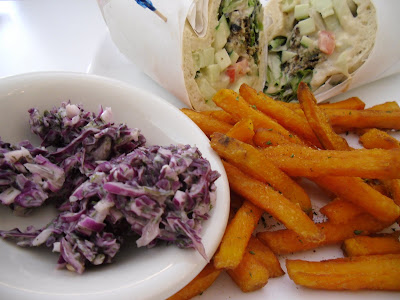 Outstanding and more than worth the price. 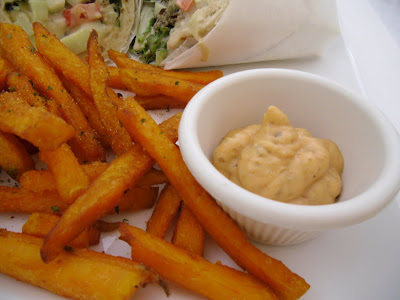 As for me, I couldn't help but to order the sweet and sour joy rice bowl: "Battered mushrooms & soy protein, color peppers, onions, pineapples in sweet & sour sauce. Garnished with sesame seeds.  Served with brown rice and seasonal side veggies."  Again, the plating was gorgeous and the portion extremely generous.  Everything was super fresh and, while fried, not heavy-tasting.  My only disappointment was that the leftover, battered mushrooms did not reheat well; I should have known.  Luckily the rice, veggies and sauce retained their delicious flavor.  Note for next time: skip the appetizers and you'll have room to finish your spectacular meal. 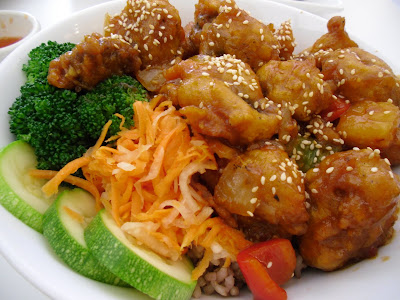 I've had the pleasure of walking amidst the Loving Hut devotees in a couple of Veggie Pride Parades now (Beeee Green!  Go Veeeeg!  Saaaaave the Planet!), and I have to say that I'm even more impressed by their restaurant than I already was by their seemingly endless array of Loving Hut-embroidered ensembles.

Much respect to the worldwide vegan chain for spreading compassion.
Posted by Abby Bean at 12:45 PM