A recent weekend started with another brunch at Quintessence. 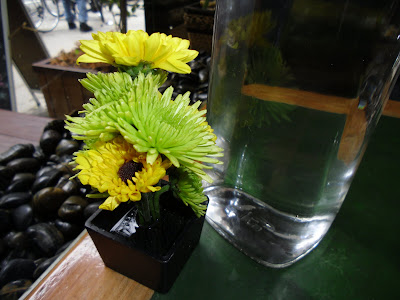 Inspired by some beautiful, scene-setting pictures on another blog (whose name I unfortunately can't remember), I'll present these to start. 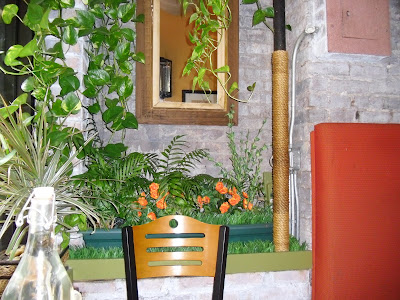 Pretty, but not as good as food, right?  Let's get to it!

My friend and I shared the Mini Pizzette: "A 4" kamut crust piled with a tangy nut based cheese, fresh tomato, avocado, pesto sauce, and caramelized onion with a sprinkling of gamasio."  It was smaller than we expected, but outstanding.  You can never have too much fresh avocado. 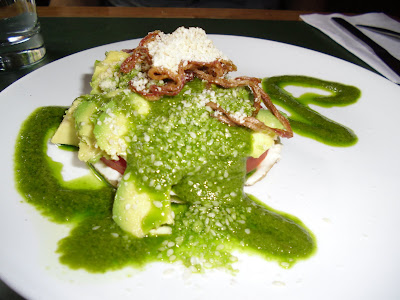 Disappointed that the club sandwich continues to elude me (it's understandably not served for brunch), I settled on two selections from the appetizer menu instead.  First, the new Tostada: "Golden crunchy Tortilla shells topped with refried beans, guacamole, lettuce, tomato, pickled jalapeno, sour cream, and nut meat. Served with hot sauce."  The hot sauce wasn't extremely spicy; instead, it just added another pleasant layer to the caucaphony of tastes.  But the pickled jalapenos?  Yes, please! 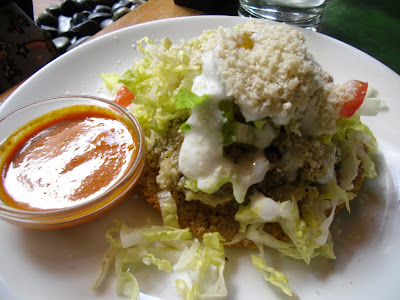 Also, the Taco.  I think it's since been removed from the menu, having been replaced by the above tostada.  This makes sense since they were very similar (I don't recall the taco containing pickled jalapeno or nut meat), but it was very good as well. 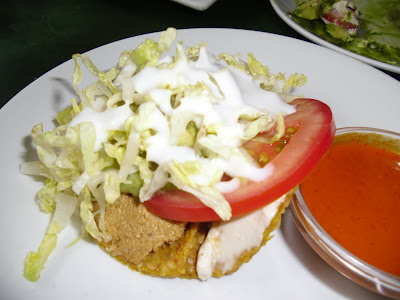 My friend went with the Fofu Benedict: "2 Slices of our tasty sprouted kamut bread topped with walnut herb sausage, avocado and fofu. Smothered with mock Hollandiaise sauce and caramelized onions. Served with mixed mesclun and your choice of dressing."  A hearty portion, we he could barely finish it. 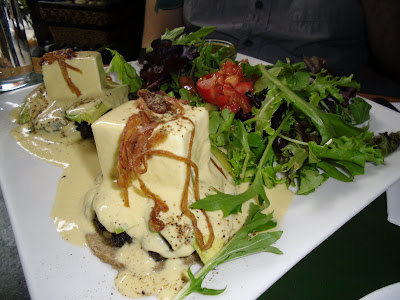 We capped off our meal with this sumptuous-looking cookie; unfortunately, it wasn't!  Instead of the fudgy, chocolateyness we were expecting, it was... unpleasant.  We think we were faked out by carob?  Sorry, we are not fans.  It could not even be saved by the yummy goji berries and crunchy walnuts. 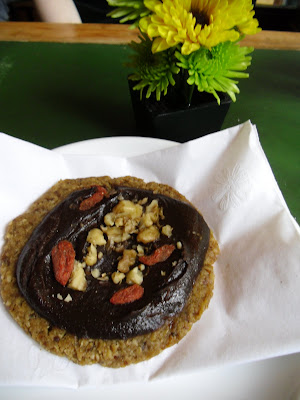 Afterward, we couldn't resist popping into Cowgirl's Baking again; I mean, it's right there.  We were happy to see that many of the goodies were now labeled and to find that one of the three people behind the counter was extremely friendly.  Unfortunately, nothing was appealing enough to override our fullness from brunch.

After catching part of the dance parade, we made our way to the Bust Craftacular, which was to be held this time in SoHo.  On the way I asked my friend what he thought prompted the move and he joked that it was so that they could charge $1 more for everything.  Indeed!  On the way we passed a sign advertising the entrance fee as $3, up from $2 this past winter. 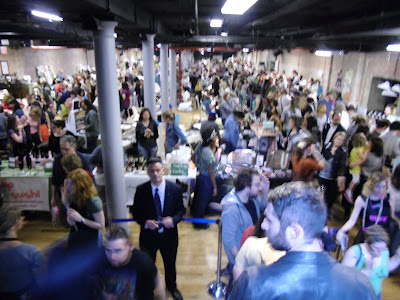 Although it wasn't Veg Food Festival packed, the place was hopping.  I was disappointed that there seemed to be fewer vendors, most of them duplicates.  That being said, I was happy to see Glitterlimes again, as I needed to replace the last clip I'd bought, lost, found, and lost again.  I was disappointed that it was double the price of the holiday Craftacular, but I guess they were on non-SoHo special then!?

Overall, I thought the fair was a bust (pun totally intended), but leave it to vegans to redeem.  Not just any vegans either, Vegan Treats!!!  One glimpse of the recognizable treats- the ubiquitous bombs and other gorgeous goodies, and my stomach had suddenly made room; give me one of everything!

There were plenty of familiar snacks, but I couldn't resist the new ones.  I immediately chose the French toast, raspberry cream donut.  Boasting a generous coating of cinnamon sugar and filled with raspberry creaminess, it was worth the cover charge alone, I tell you. 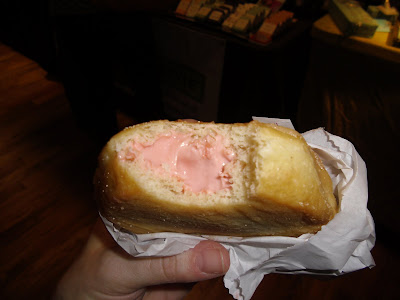 My companion went with the tried and true whoopie pie (VT's version tastes like a Devil Dog, but better & cruelty-free). 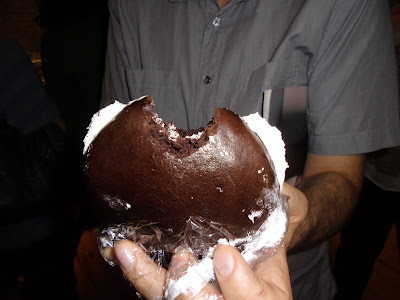 We kinda scarfed 'em both. 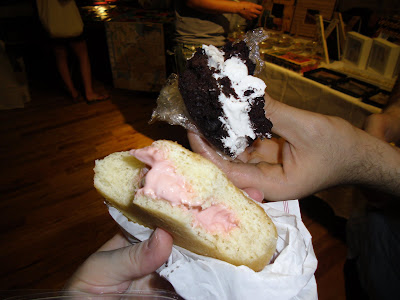 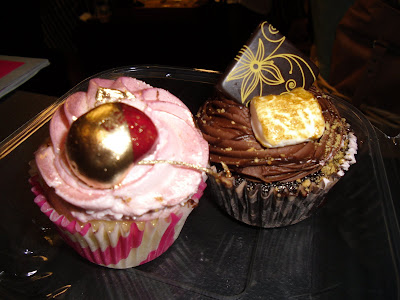 After waiting out both the rain and the rapture, we met up with more friends and I had the opportunity to visit Lan Cafe for the first time.  The service was casual but efficient, the atmosphere the same.  The banh mi is called a baguette at all-vegan Lan, and is filled with your choice of ham, sausage, grilled seitan, or tofu meatballs: all served with carrots, cucumber, cilantro, lettuce, and tomato.  It was different than I expected- not quite as spicy or filled with pickled ingredients as I would have liked, but I enjoyed.  A friend and I went half and half on the seitan and the ham and we both preferred the latter.  I have to admit, though, that I still like this one the best. 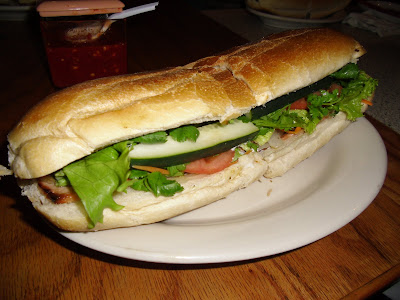 As you can see from another friend's Grilled Lemongrass Seitan ("on rice vermicelli with cucumber, shredded lettuce, fresh aromatic herbs, bean sprouts carrots, roasted peanuts, shallots"), their seitan is really meaty (and presumably house made). 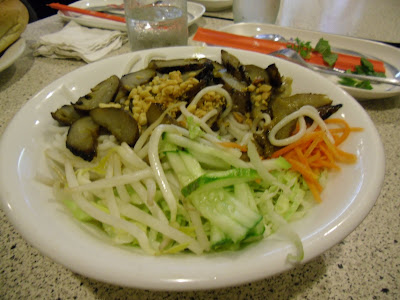 At this point in the evening we grabbed some Lula's on the way to see Forks Over Knives.  Can you believe that I forgot to photog my cone?  In my defense, I was too busy excitedly chatting about an upcoming flavor of INCREDIBLENESS (stay tuned).  For the record, I think I had cotton candy.  Or was it drumstick?  Can't remember, but rest assured it was superb.

As for the movie, at times the format was a little too dryly educational to engage non-believers, but the overall message was clear.  Unfortunately, the other theater inhabitants only seemed impressed (audible ooohs and aaahs) when the weight-loss aspect of a plant-based diet was mentioned; never mind the reversal of disease!  All in all, a good movie to share with non-vegan friends and family.

Phew; sometimes it seems like every day is a Vegan Food Festival.
Posted by Abby Bean at 7:34 AM