Recently, in honor of a friend's birthday, a group of us went to Caravan of Dreams.  The honoree and his companion are both big fans, another diner had been there once before and hadn't been impressed, and the rest of us were newbies.

Per usual, I perused the menu beforehand.  Having always assumed Caravan was a casual, longstanding throwback veg restaurant, I was surprised that the the prices were in line with Blossom and John's, as opposed to what I'd assumed were its contemporaries- Sacred Chow and Angelica Kitchen.  Knowing the pretense of the price point going in, I was prepared to hold the restaurant to a proportionate standard in every other respect.


The decor of the back dining room is what may have passed for exotic in the nineties, but twenty years later the red walls and dim lighting are not only bad for blog photos, but are simply unappealing and obviously more likely intended to hide the decorative imperfections than an effort to create atmosphere.  The tiles of the dropped ceiling are torn and seemingly chewed upon in many places, the vinyl diner chairs horrific on their own and made only more atrocious by the exposed stuffing attempting escape from just about every seat.  The worn edges of the veneer-covered, particle board tables are begging to be camouflaged by tablecloths; the napkins are paper.  I will note that Caravan has earned an A rating from the health department, so these shortcomings are all, presumably, aesthetic.

The waitstaff was pleasant enough, but certainly not of the service caliber of other restaurants- both in the same price range and under.  Our waiter chose to remain stationary at one end of the 8-person table so that those on the opposite end had to call their order across the length of diners.  Then, because he remained there, everyone was beholden to pass their menus down to him rather than have them collected.  When the entrees were delivered, the dishes were called out because no effort had been made to track who had placed which order.  Worse, plates were purposefully handed to the wrong recipient with the explicit expectation that our party would distribute the plates amongst ourselves.  Again, not really befitting the price point.

The dishes themselves didn't offer much in the way of presentation; plating didn't seem to have been given more than a glancing thought.  And then it was time for the real test: the taste of the food.

It began poorly with what I fear was their idea of an amuse bouche: two, thin slices of apple drizzled with olive oil.  Uninspired and unnecessary, the oil wasn't even anything special. 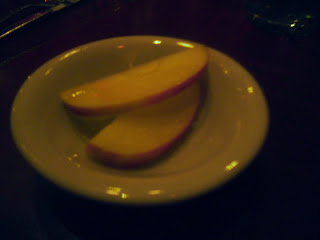 The Seitan Nachos appetizer: "Black beans, guacamole and salsa" was, overall, very good.  Everyone at the table- myself included- enjoyed, but I was nonetheless disappointed in what seemed to be store-bought chips, and unimpressed by the the prepackaged seitan chunks.  When an omnivorous restaurant such as John's can make their own seitan, a wholly vegan establishment has a lot to live up to.


The Almond Hummus (LIVE): "Crudités and chia chips" was a creamy and unexpectedly light hummus.  I was the only person who didn't love the chia chips, but the dip was rather excellent.


At this point there was another service demerit: replacement silverware was not provided between courses.

For dinner I decided to order the tempeh reuben: "Caramelized onions, Russian dressing, tomato, rye toast, house sauerkraut and pickle".  As expected, the Bread Alone rye was outstanding.  The combination of the Russian dressing and house sauerkraut was superb, but in insignificant quantity; I would have liked to have enjoyed it in more than only the center few bites.  The sandwich also contained one each of a grilled onion and fresh tomato slice- also relegated to the middle of the sandwich.  The main component, the tempeh, was an unfortunately uninspired slice.  This is not to say the sandwich wasn't good overall, but I expected more than good.

The sandwiches are served with salad or soup; a friend and I who ordered the same meal each chose the opposite accompaniment. My salad was fresh but tiny, and I would have liked to have been able to choose the dressing. 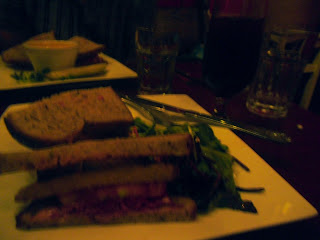 The soup of the day, butternut squash, was the better choice: sweet and thin.


Per usual, we decided to forgo the dessert menu and instead hit up Lula's- thus putting an end to my disappointing introduction to Caravan of Dreams. I don't expect to return any time soon.
Posted by Abby Bean at 3:43 PM

Email ThisBlogThis!Share to TwitterShare to FacebookShare to Pinterest
Labels: Caravan of Dreams