Beer Glazed Donuts! Another Sunday With The Cinnamon Snail

Don't get me wrong; I love that The Cinnamon Snail is in NY plenty these days.  But my favorite place to visit and really chow down is in NJ at the Red Bank Farmer's Market.  To make the trip even better, it was 89's first foray into the world of the Snail. 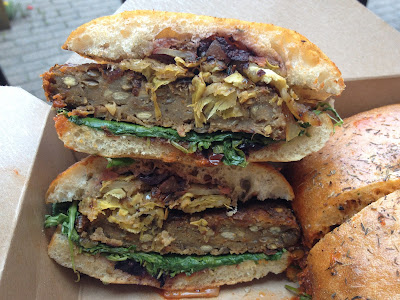 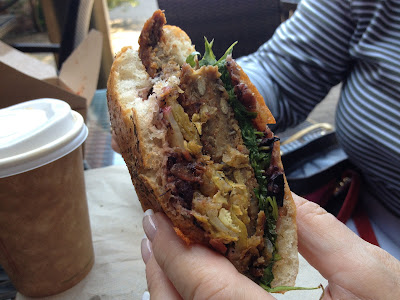 At the last minute she almost wussed out and got her standard (always delicious) portabella carpaccio, but I held firm and prevailed...mostly because she didn't like my alternative suggestion of getting three sandwiches for the two of us (89 was not partaking).  We shared, natch, and both agreed that this sammie was an impressive addition to the long line of prestigious Snail specials.  Because her favorite is always what she's eating at that precise moment, it's kind of hard to judge by VM.  So take it from me: eat this burger if it comes around again. 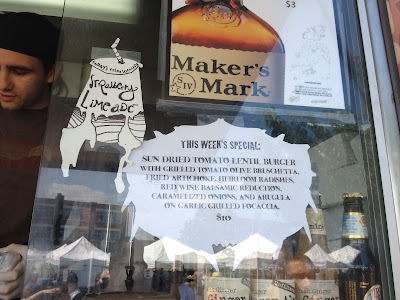 I knew going in that I was having sharing the amazing gochujang burger deluxe with sauteed kimchi, arugula, pickled daikon and leeks, black sesame gomasio, and sriracha mayonnaise on grilled focaccia.  I definitely made the right choice: the soft (but substantial) patty was loaded with kimchi and sriracha just the way I like; it definitely did not disappoint the second time around. 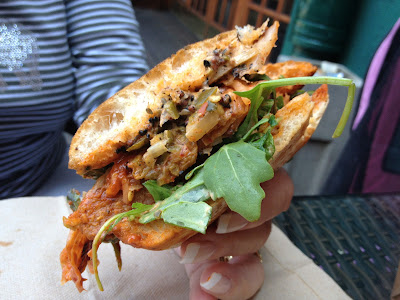 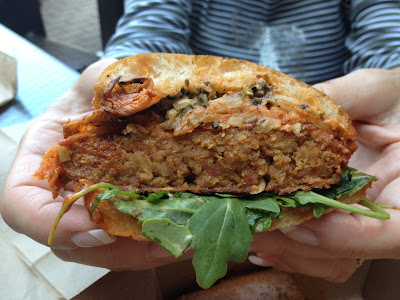 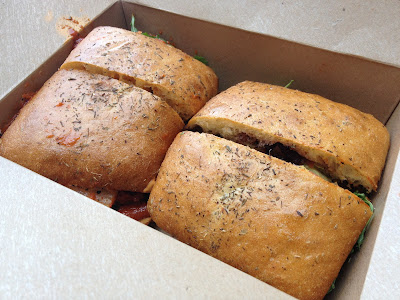 When VM stepped off the line to take 89 to a shadier spot, she made me promise not to get a lot of desserts.  She said something about us both already having a lot of goodies at home to eat/eating too much lately/blah blah blah.  I nodded my head, but the fact that I was clutching my ginormous pastry carryall in anticapation should have been a pretty good indication of my unswayed intentions. 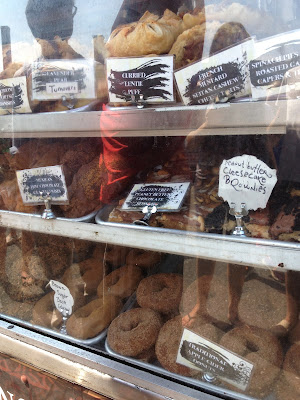 In my defense, I did wind up making a concerted effort to only mostly choose items I've never tried before...along with a couple of other items that I simply could not have been expected to pass up.  Lucky for us, these things all last just fine in the fridge throughout the week (and in the freezer, FYI, if you have excessive willpower) so there's really no reason not to stockpile.

There was no way raspberry/chocolate lover VM was going to miss the week's special donut, the raspberry blackout. 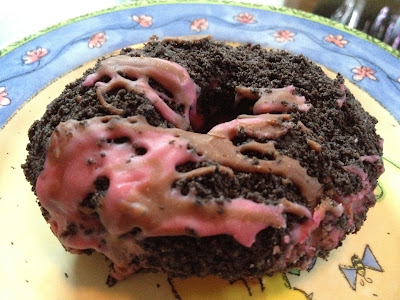 I was expecting something totally different than the vanilla donut with chocolate and raspberry icing, but you cannot go wrong with chocolate crunchies; it was excellent and not too fruity. 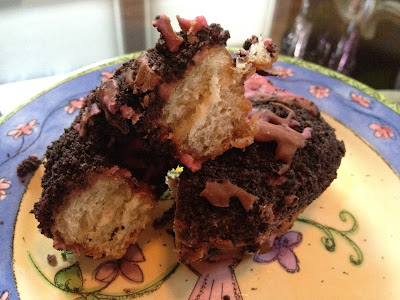 In case of emergency (that I wouldn't like the fruit in the raspberry blackout), I got the Hulk Hogan transvestite fudgey wudgie for the first time. 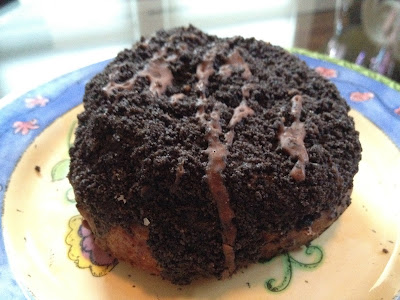 Again, surprised to find a vanilla donut, but the generous squeeze of chocolate goodness in the center coupled with the same chocolatey crunchy coating was a hit.  I'm beginning to find a chocolate/non-chocolate balance. 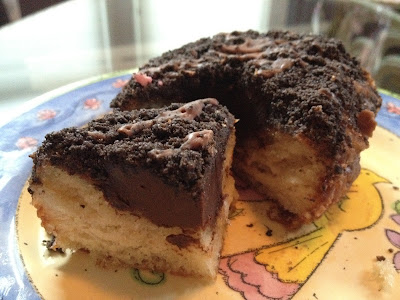 After falling for the mint Matlock took all of his clothes off last visit, I certainly wasn't going to miss my opportunity to have another.  So good! 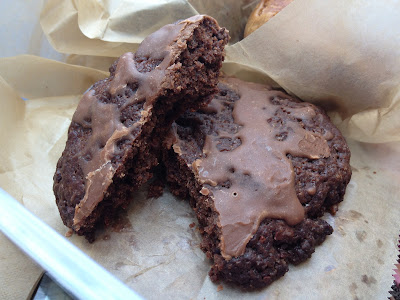 So, in fairness, I got VM her favorite Snail cookie: the wild man Ned Stevens marshmallow pecan gutter cleaner.

Snail fruit-glazed donuts are awesome, so I also got the rockin' blueberry hibiscus glazed.  Yum!  I'm not sure what made this donut different, but it was extra moist and decadent- almost like a French cruller. 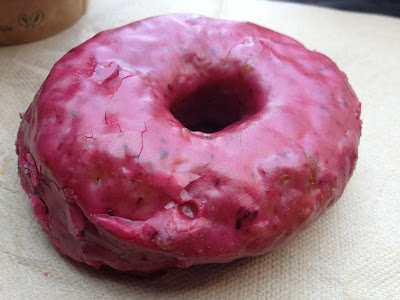 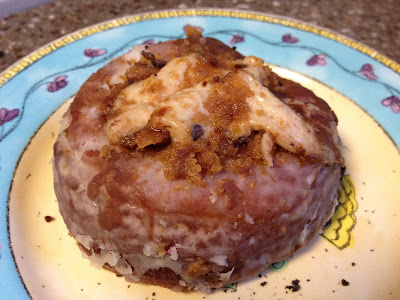 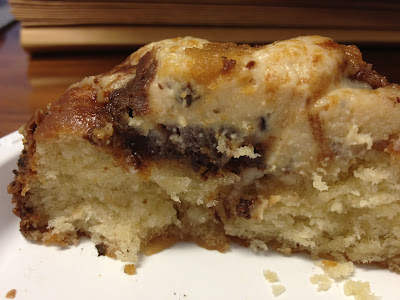 And, well, the peanut butter cheesecake brownie was a given. 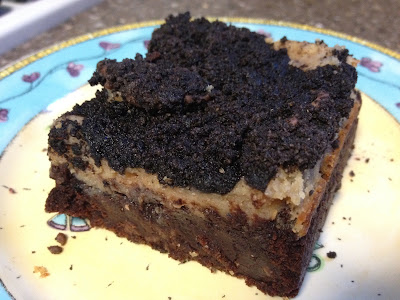 Imagine a super thick chocolate chip brownie layered with peanut butter cheesecake and more chocolate crunchies. It's been a chocolate crunchy extravaganza, I tell you.  Richest Snail dessert thus far; I ate this one in stages throughout one workday. 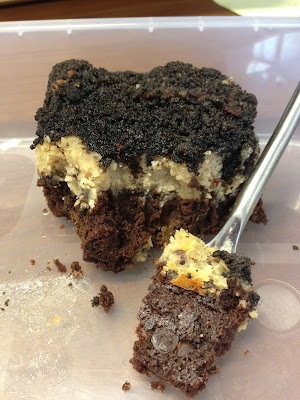 Ever since her first visit, VM just can't Snail without a traditional apple cider donut*. 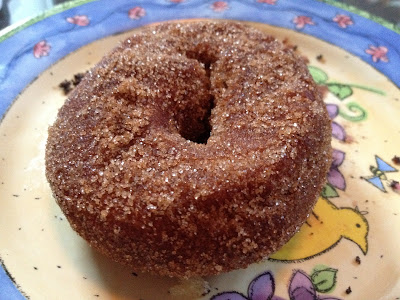 But what was that next to it?  Was that a battered donut?  Brown sugar beer glazed:  it looked like it had a hard shell like an...like an....onion ring! 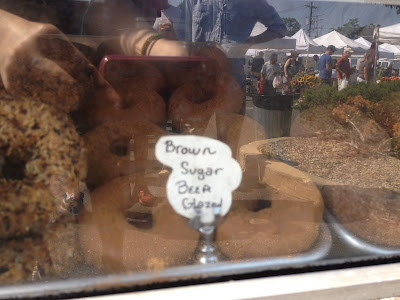 I don't like beer.  But I do like onion rings.  What to do?  Get one.  Then, immediately get another because the first knocked your boots across the parking lot. 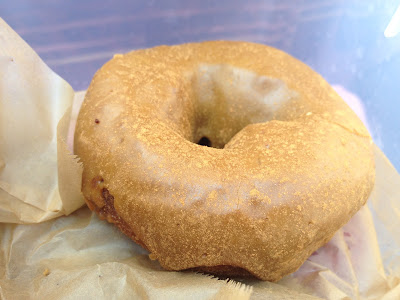 I always go for the lemon or limeade of the day, but then I get an iced coffee as "dessert".  We both love the star-anise spiced coconut milk iced coffee, but this day I tried the mint chocolate (apologies for freaking out the Snail crew when I asked if there was milk in the coffee.  I of course meant "milk"!). 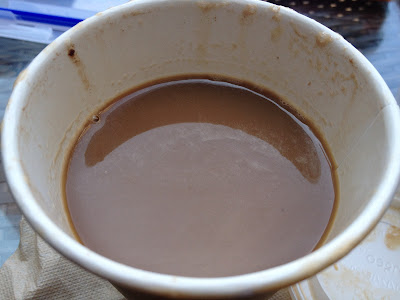 And then 89 was pooped and it was time to head home. 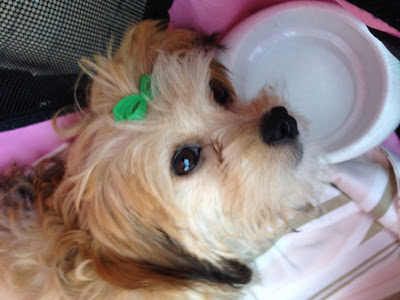 *So here's what happened with the apple cider donut.  I accidentally let 89 lick my fingers after I ate this donut.  It seemed harmless, mostly because I'd licked them myself before she got to them (I was home; don't judge me!).  However, she definitely picked up on the magic of the Snail because any time I took something snaily out of the fridge after that incident, she did this crazy, hind-legged dance by the counter.  Good taste, that 89.
Posted by Abby Bean at 8:01 PM