A couple of years ago when I was embarking on the Crazy Sexy Cleanse, OD bought me a juicer.  He noticed the Vitamix while he was in the store, and bought one of those too.  I was very grateful, but that was way too much money to spend on kitchen appliances at one time; I asked him to return it.  Since then, I've run into a zillion Vitamix demos at Whole Foods, and they're always making something vegan and delicious.  So, I've been considering it.  Finally, I bowed to the promise of homemade frappes and soup warmed from the blender and asked OD to, once again, pick one up for me.  And so, when I came home, there it was. 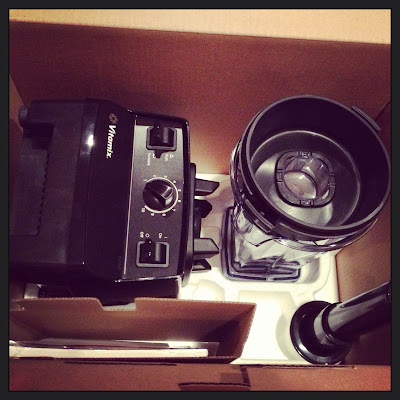 There wasn't too much time for admiration since it took someone about 2 seconds to bite it. 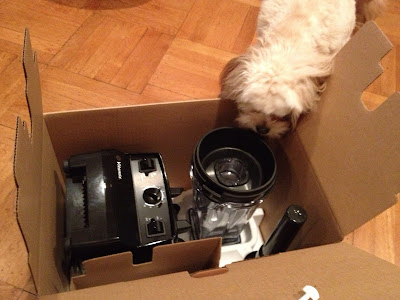 I'd been a little lax with my food shopping since my vacation, so I didn't actually have anything in the house to cook.  Embarrassingly, I sat eating a can of Amy's soup for dinner while perusing the included, complimentary cookbook.  To my surprise and dismay, the recipes were decidedly un-vegan. 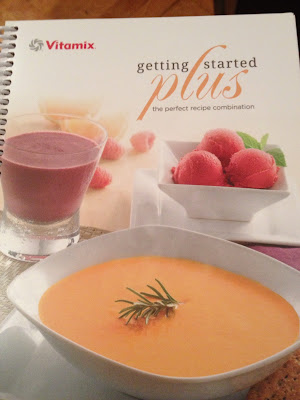 In addition to being disappointing, it was also ironic.  I'd had a conversation earlier in the day, wherein I maintained certainty that Vitamix was extremely vegan friendly. 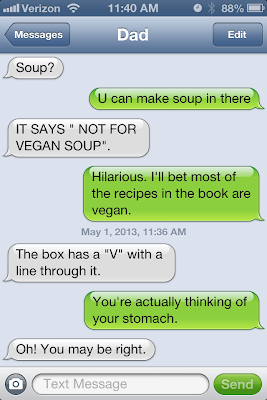 Clearly, I was wrong; the recipe section on the Vitamix website wasn't at all as vegan-centric as I'd expected either.  Sure, there are 100+ recipes available, but I was looking for better than hummus and sorbet; I was looking for all of the deliciousness I'd been served at the Whole Foods demonstrations.  I was looking for the lentil herb pates and extraordinary soups.  I WAS LOOKING FOR THE AWESOME CASHEW ICE CREAM!  Alas, it was nowhere to be found.  Will one of you talented vegans please whip up a vegan Vitamix cookbook?  I am The market is begging for it!  I don't fully understand why a product that is so heavily marketed to vegans in-store doesn't seem to follow through with gusto; maybe the vegan demos stem from allergy concerns?

In the end, it took me a few days to warm up to Vita.  It didn't help that when I cleaned her the inaugural time there was a bit of a suds overflow, but I take responsibility for that; my motto is: if one drop of soap is good, three must be better!  But then, one evening, VM was helping me prepare two dishes for a potluck and I decided to make us highly caffeinated frappes to keep us going.


Coffee + almond milk + ice + chocolate syrup = YUM.  The volume of food the Vita can prepare is impressive; it doesn't look like much, but we were able to fill our glasses twice. 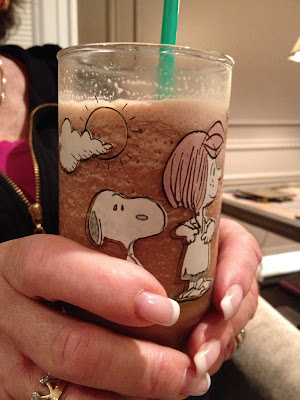 A day or two later I made myself a shake smoothie of banana, peanut butter, cinnamon, agave, almond milk, ice.  I had to put in more liquid than I expected in order for Vita to blend it smooth, but it turned out nice and thick and frozen.  This time only one glass full: 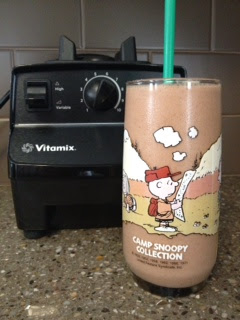 I really wanted to make a frozen hot chocolate next, but I figured it was time I made something that didn't include chocolate and require a straw.  A kind soul saw me inquiring about vegan recipes on the Vitamix Facebook page and sent me Paul Bertolli's Cauliflower Soup recipe, so I figured I'd give that a try.

The ingredients were few and the instructions simple; of course I doubled the recipe.  Here are my sweaty onions onions sweating. 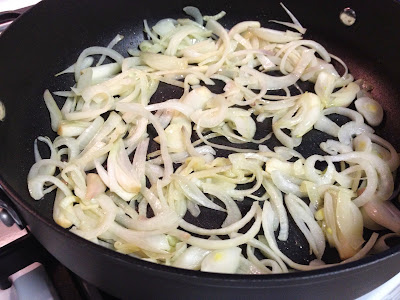 I cooked the cauliflower per the directions, but I only used a quarter of the recommended water in the second part of step #2. 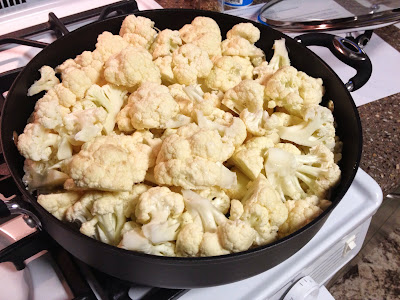 I added the water, a splash more oil, and a ton of freshly ground black pepper as I pureed in Vita.  It reached a "very smooth, creamy consistency" in no time; this sucker is powerful!  The last time I made soup that required pureeing, it was extremely laborious: because the food processor only held a little at a time, it took many batches to puree and it never wound up smooth.  This did.  And fast. 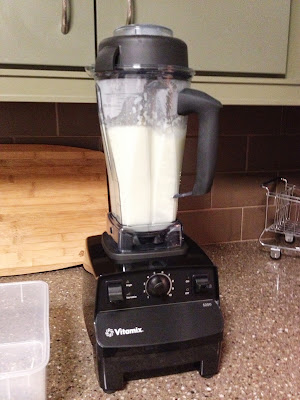 I'd tasted the first batch and it desperately needed salt and pepper.  By the last batch I was frantically loading in the pepper so that I wouldn't wind up with a vat of tasteless soup.  The final result was impressive because of the speed at which I'd created creamy soup, but the flavor was meh.  Had I not added the extra oil and considerable amounts of salt and pepper (especially pepper), I'm not sure it would have tasted much like anything.  Also, it was foamy.  No, that's not the right word.  Frothy? Airy?  Viscous?  It tasted whipped- even when reheated and thinned with more water. VM, who's extremely sensitive to these types of things, had two spoons full and then informed me she was going to gag.


I can do better!  I'm eying the broccoli cheddar soup in the recipe book; it's begging to be veganized.

In the meantime, I made a non-chocolate beverage: strawberry/agave/soymilk/cinnamon smoothie.  I have to work on my ice ratio, but otherwise Vita makes blending a piece of cake. 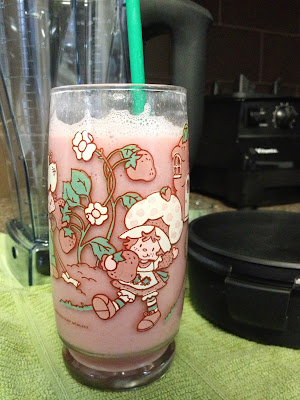 I know what you're thinking.  What happened to the Magic Bullet?  Fear not; it's still here and it's still in use!  It's great for salad dressings and, let's face it; I still have a soft spot for a blender cup that doubles as a drinking cup.
Posted by Abby Bean at 6:37 AM