I'm not generally a fan of eggplant unless it's smothered in Daiya and tomato sauce, but when I stumbled upon this basket full of "fairytail" adorableness at my local farmstand, I simply couldn't resist the cuteness (no fairies were harmed in the making of these "tails").  Parmesan was out because I wanted to prepare them in a way that would showcase the diminutive size of the vegetable; so, I went with my lazy fallback of roasting. 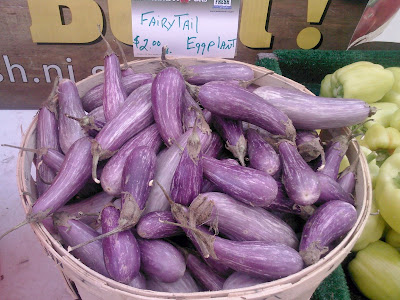 I tripled the marinade for the Grilled Vegetable Napoleon in The Candle Cafe Cookbook (p. 9) and marinated 17 halved eggplants, 2 thickly sliced red onions, and 2 sweet Hungarian peppers cut into rings for one hour. 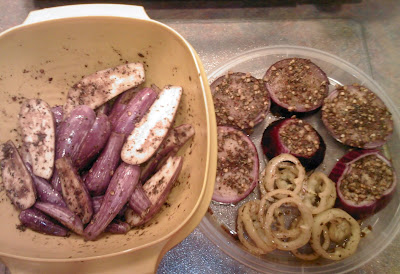 As my forbidden rice cooked, I baked all the veggies on a lightly oiled baking sheet at 350 degrees for fifteen minutes.  I flipped them, brushed with the marinade that was left over, and baked for another ten minutes. 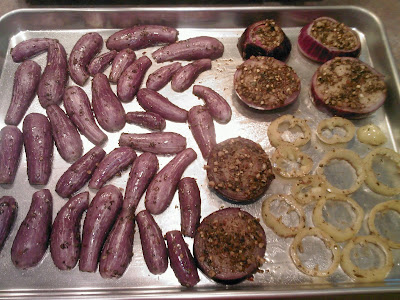 I was a little disappointed that my eggplant didn't retain its beautiful color, not to mention the fact that it still tasted like boring old eggplant (sorry, not a big fan).  The peppers were a complete bust; I don't think they had any taste whatsoever: sweet or otherwise.  The star of the show was definitely the delicious onions.  I'd never prepared them this way, but would certainly do so in the future. 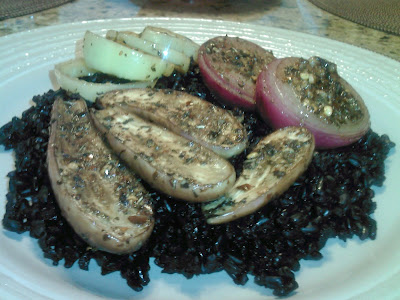 How could the adorable tails have come out so boring and generically eggplanty?  I was not going to be deterred; after an exhaustive search of the indexes of my favorite cookbooks proved fruitless, I turned to Google.  There I came upon Rachel Rappaport's delicious-looking fairy tale eggplant recipe and, with some personal guidance from her, decided to give it a try.  She suggested that I make a concerted effort not to overcook the tiny eggplant (easier said than done for this chronic over-cooker) and resist cooking them skin side down. 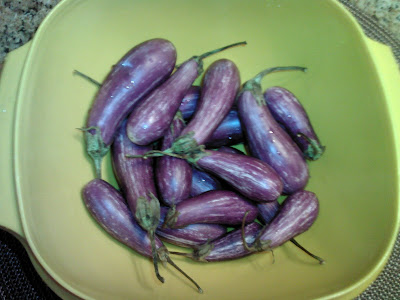 So I restocked at the farmstand, this time choosing cubanelle, sweet banana, and cherry peppers to go with the red onions.  I followed the instructions for the eggplant to a T, cooking everything else separately.  Clearly there is something inherently wrong with me because a couple of minutes in my 'plants had already gone from purple to brown.  Grrr.  I completed the dish, resisting the urge to toss the whole thing mid-prep, and served it upon jasmine rice.  The sauce was wonderful and so too were the onions and peppers; once again, the eggplant was the glaring disappointment. 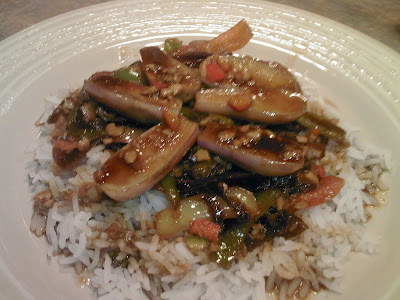 I think I'll embrace my original disinterest in eggplant, unless it's smothered in Daiya and tomato sauce...preferably prepared by someone else.
Posted by Abby Bean at 6:39 AM