Now I Can Spell Focaccia AND Make It

I have been wanting to try to make bread for some time, but I tend to eschew recipes that require yeast or kneading, or generally involve a lot of time and/or generate a significant mess. For example, recipes that call for rolling pins are immediately out because they require too much paraphernalia and result in entirely too much surface area to clean.  Admittedly, these guidelines are in place mostly to save me from myself, as I have had shabby luck with yeast and downright frightening results with recipes requiring rolled out dough.  But, when I heard about My Bread*, a cookbook showcasing a "no-knead" method; I decided to at least give yeast another try (but not rolling pins; they're still on my bad list).

There is a bakery at the Farmer's Market near work that sells tomato basil focaccia that looks so simple that I've had illusions that even I could make it.  I can't explain why I've found the simplicity so appealing or why it's never occurred to me that it's not at all unlike a cheeseless pizza; but, for my first foray into the bread world I chose the relatively simple (albeit exorbitantly time-consuming) focaccia recipe.

Making the dough was easy enough.  I didn't have any expectation that the yeast would work (there's a conspiracy against me), so this was the picture that I took before the first rise, expecting it to look identical after three hours. 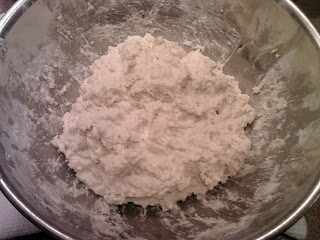 To my surprise, the dough did rise exactly as promised (!), and I was so dumbfounded that I forgot to get proof take a picture.  With new found optimism, I stretched it out on the baking sheet in preparation of the second rise.  There is no picture of that result because, true to form, the second one inexplicably didn't occur. 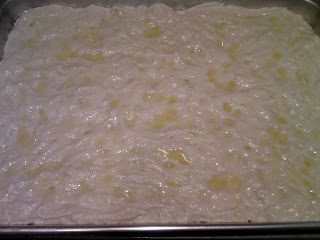 Undeterred, I carefully placed the half-risen dough into the oven and crossed my fingers. 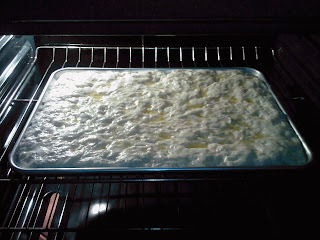 Obviously, I was surprised that it came out looking like, um, actual focaccia. 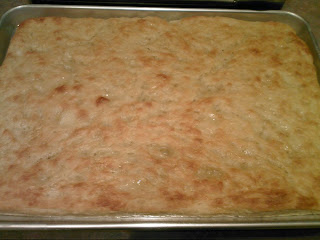 So I admired it for a bit. 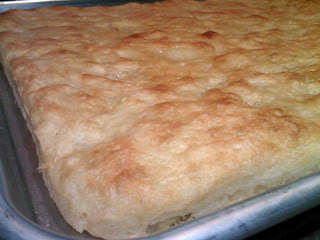 Then I dolled it all up with sliced compari tomatoes and fresh basil leaves and went to town. 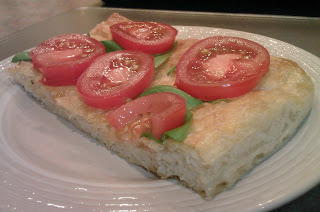 The first bite was good.  By the second I was thinking it tasted like a cheeseless pizza.  Third bite in I'd decided even Daiya couldn't save this oily bread; focaccia is too doughy for me.  What was I thinking?  I'm a crust girl!  I throw my bagel innards to the birds, for goodness' sake.  Sigh; user error again.  If you're a fan of focaccia I'm sure you'd like this, but I'm going for something more my style next time: crusty olive bread.  In the meantime, I'll pretend I didn't waste five hours making something you can pick up at any un-vegan friendly pizzeria in the country.  Yes, I'm bitter.  Five hours!

*Please note that most of the recipes in "My Bread" are vegan by default, but some call for animal products; use your noodle.
Posted by Abby Bean at 7:02 AM