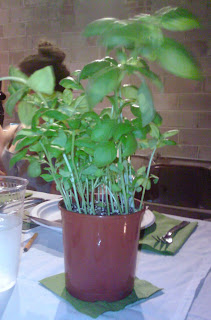 We missed the first one, but VM and I have been proud supporters of Veggie Conquest, the NYC vegan cooking competition, since number II.  Number III was a blast, and number IV was so much fun that I kicked back and relaxed, not even bothering to blog about it (sorry).  This latest installment was one of the best.

For starters, VM and I were lucky enough to have been invited to sit with Mr. and Mrs. M., co-creators of vegan socialite, entrepreneur, and VC founder: Jessica.  Much like a trip to Lula's, Veggie Conquest is a great place to meet new and interesting people; these dining companions were no exception.

Per usual, Joshua Katcher did an extraordinary job as emcee: effortlessly commanding the audience with his unparalleled charisma,  entertaining quips, and general swoon-worthiness.  Did I mention that VM is a big fan?   Actually, I'm a big fan: her fandom is cosmic.

The secret ingredient was basil and, per usual, the chefs' submissions were inventive and involved.  Not a pesto in the bunch, the creativity and variety of the "tastes" was further proof that I should never embarrass myself by being a chef; I belong in a taster seat indefinitely. 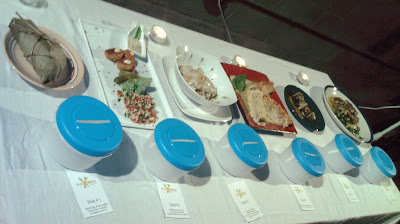 The second course was so extraordinary, it may have even surpassed the one we enjoyed at VC II when a lentil dish prepared by a volunteer (not Susan!) bowled us both over.  We haven't stopped talking about it since, but have been too lazy to make it ourselves never attempted it.  This time around, in addition to the volunteers' submissions, Foodswings donated the world's cutest double decker cheeseburgers: each identically and artfully presented with like-sized accoutrements and the requisite party pick to hold it all together!  They also brought along Daiya mac & cheese with smoky bits of mushroom.  I really wanted to go back for seconds on both of these scrumptious eats, but even I was too full.  Suffice it to say that they were even yummier than they look.  Obviously, another trip to Foodswings is in order. 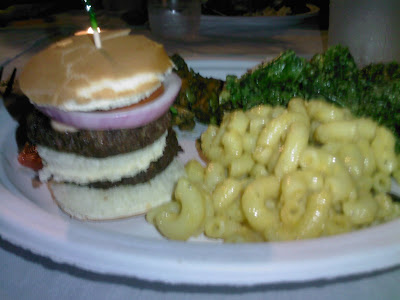 As if that wasn't enough, there was also a pasta & vegetable salad, sweet potatoes with pumpkin seeds, quinoa & veggies, and a kale salad with avocado dressing: a plateful of vegtastic goodness. 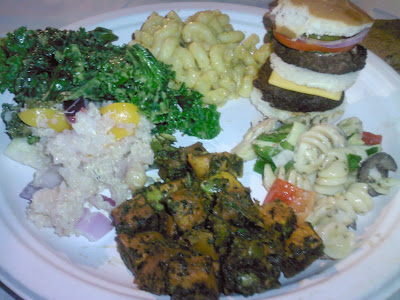 In addition to their company and conversation, our dining companions treated the entire crowd to a ridiculously fortuitous bonus: an incredibly huge and gorgeous Champs' cake in honor of VC's 1 year anniversary. 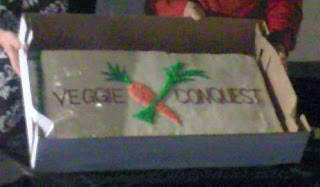 No mere "sheet cake", this rectangle of beauty boasted fluffy, moist, crumby vanilla cake with a just-sweet-enough berry center and cream cheese frosting: it was startlingly and absolutely delicious, even to this unapologetic chocolate lover. 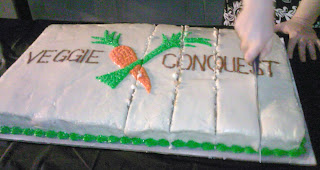 If you're looking for a fun, delicious way to spend the evening with like-minded people, sign up for Veggie Conquest's mailing list so you don't miss out on the next event.  Or don't, because if I get shut out from buying tickets VM is not going to be happy!
Posted by Abby Bean at 8:01 AM