Years ago, on the recommendation of non-vegan co-workers, I went to Veggie Heaven in Parsippany, NJ.  I chose a myriad of things to try, but only liked one: minimally; I never returned.  That location has since closed, but I recently had the opportunity to visit the Denville location with a vegan friend, the swell @arielaisawesome.  She had visited another location in the past and was very complimentary about the experience, so we decided to punctuate our day of sweets-eating with some vegetable grub. 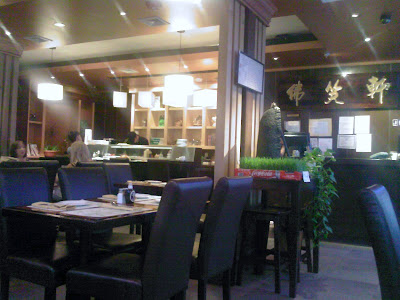 The first taste of the visit was the water; one swig revealed it to be severely dreadful, Jersey, tap water.  Now I realize we were in Jersey so that was to be expected, but what was not anticipated was the fact that it was completely unfiltered.  Severe gag alert; this was a no drink zone.

Next up was the complimentary...lettuce?  It looked like wilted, pale shreds of iceberg, but it tasted like cabbage soaked in vinegar; a poor man's kimchi?  I was hungry and ate most of the bowl, but my companion's meager taste wound up understandably spit into her napkin. 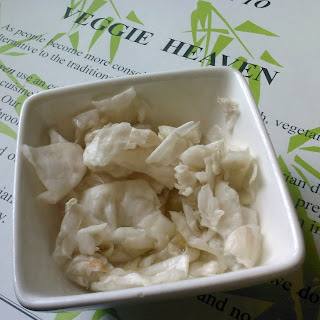 We started with the bamboo and tofu soup for two, both of us expecting an avalanche of delicious bamboo shoots.  Instead, we were greeted with this startling bowl of non-shoots: 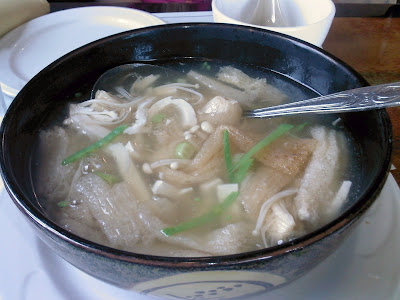 We didn't know what the spongy masses were, but they were stretchy, chewy, and decidedly not bamboo shoots!  I could not eat more than the initial taste, which was wholly unpleasant; the rest stayed in my bowl. 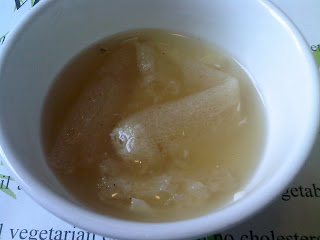 We asked the first waiter we saw about the absence of the shoots and implored him to tell us what in the hell what exactly the unappetizing masses were.  He responded by chuckling, then condescendingly asked us if we were expecting the bamboo to look like the decorative bamboo on the windowsill.  Ignoring the slight, we soberly explained that we were expecting the familiar bamboo shoots.  His response was merely that what we were [not] eating was the type of bamboo that Chinese people prefer.  It was a meager explanation at best and, now that we know what it actually was, it doesn't even make sense.  Through her superior Googling skills, Ariela was able to determine that the slop was actually bamboo mushrooms.  Saying a bamboo mushroom is a type of bamboo is like saying a cherry pepper is a type of cherry.  And, for the record, the description of this dish on the menu did not include the word mushroom at all, yet it contained loads of enoki in addition to the bizarre, bamboo mushroom grossness (thanks again for the vomitous pics, Ariela; gagging at the thought of it).

When our waiter returned to clear the bowls of dreadful "bamboo" we explained how disappointed we were that the ingredients were not as expected.  Not at all concerned with our dissatisfaction, he didn't so much as offer a shrug of acknowledgment, let alone a replacement soup. Such a gesture would have gone a long way in making us feel as though our enjoyment was any sort of priority for the restaurant, but it's clear it was not.

I've been on the hunt for a Thai noodle dish served in a pure sweet and sour sauce, while my companion generally enjoys the type served with peanut sauce; the cold noodles with sesame sauce wound up being a hybrid of what each of us was expecting.  It looked a little strange when it arrived: 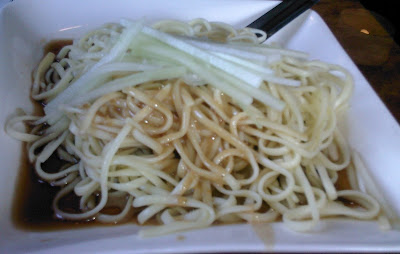 But once the flavors of the dark sesame sauce on the bottom were all mixed up with the creamy peanut butter sauce on the top, it became our favorite dish of the evening. 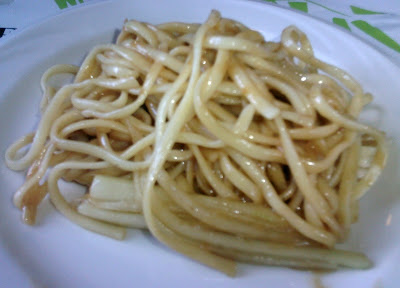 The scallion pancakes were a little more deep-fried than I expected (foreshadowing alert), but good.  Unusually, they were served with the thick, plum dipping sauce that usually accompanies moo shu vegetables.  We found a nice balance by dipping them in both that and the leftover sauce from the noodles. 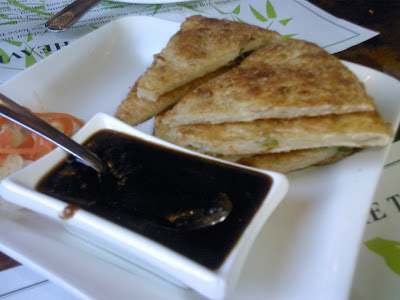 We were both in the mood for General Tso's for dinner, but there was some confusion because the menu listed two kinds: balls and chunks.  I wanted to go for the chunks by default, but when the waiter explained that the balls were crispier we both agreed they would be more authentic. 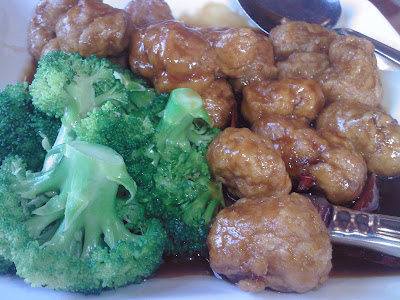 We should have known when it took two hands to push a fork into one that we were in for trouble.  Unfortunately, the General Tso's Veggie Chicken (balls) wound up being severely over-fried balls of what may have once been some kind of mock meat, but had turned into what can only be described as unidentifiable masses of deep-fry-edness. 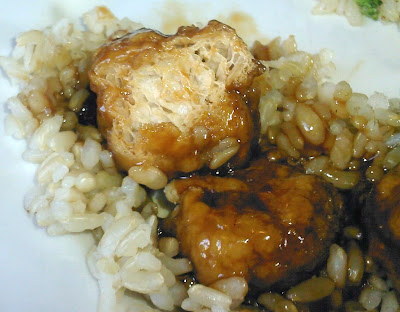 When we sent practically the entire plateful of balls back to the kitchen and specifically asked for it not to be wrapped for leftovers, it was obvious that neither of us enjoyed the dish.  Yet, once again, the waitstaff neither registered or acknowledged that perhaps we should have been offered an alternative, or showed the slightest concern that we were about to leave as unsatisfied customers.

Finally there was our safety net, one of the more ingredient-filled, "fancy" vegetable fried rice options: the healthy heart fried rice, boasting broccoli, edamame, carrots, cashew nuts, pine nuts, and raisins.  The description looked incredible, but I'm afraid two of the most enticing ingredients: edamame and pine nuts, were missing from the dish-- along with any discernible flavor. 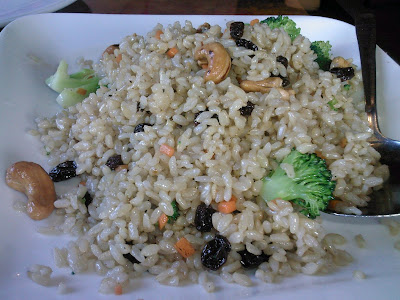 It was okay, but mostly dry and plain.  Luckily, when mixed with the only edible aspects of the General Tso's-- the sauce and the broccoli-- it was quite tasty.  Unfortunately, I do not consider mixing the salvageable portion of one meal with the bland, partial ingredients of another to equal a successful meal.

Fortunately, the dining company was terrific and the conversation trumped the severe culinary disappointment (and I use the term culinary loosely in this instance).  After two, separate tries would I recommend Veggie Heaven?  Absolutely not.
Posted by Abby Bean at 8:36 AM