Dear friends old and new, thank you for visiting my blog!  While I can't thank you individually, I do have a sweet giveaway for you, courtesy of Gone Pie Vegan Bakery- a friend and fave of A Soy Bean blog (you are HERE!).  [UPDATE 10/15/12: winner announced below!] 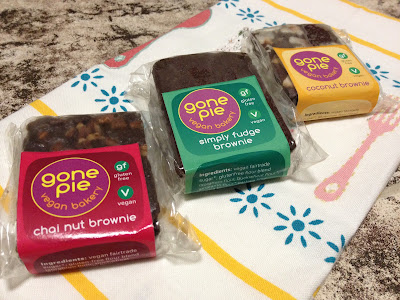 Recently, the always generous Barbara from Gone Pie was kind enough to send me a package of goodies to munch and review.

Lucky for me, the gluten-free extravaganza arrived on a day when my parents were visiting 89, so I was unable to hoard them able to immediately share the bounty with the esteemed tasting panel. 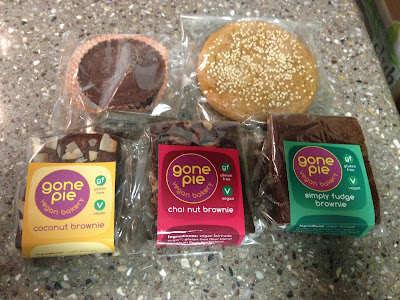 To start, a trio of brownies.  I'm thrilled that these brownies, also available by the pan, are now offered in individually wrapped packages.  In addition to the appealing bit of brownie that peeks out of the transparent wrapper, the aesthetics of the labels are too striking to resist.

We tasted the simply fudge brownie first as a baseline.  These are truly moist, fudgy brownies.  Terrific on their own, they also make a mighty fine brownie sundae. 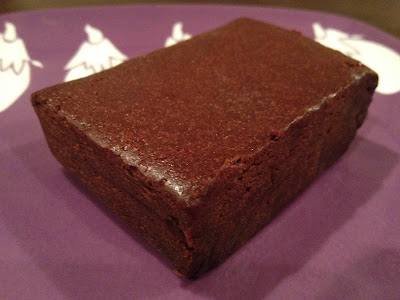 Appreciate the high-end ingredients and look for them in the green packaging:

Next up was the chai nut brownie.  Similarly textured, these have a mellow spice that plays well against the the crunch of the nuts.  This is one of my favorites and it's especially nice in autumn with a hot cup of chamomille (don't double down on your chai). 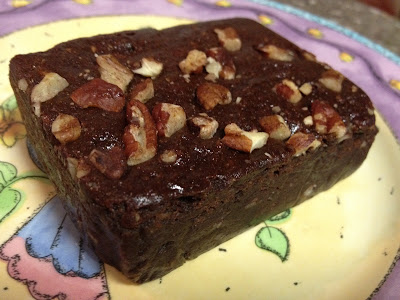 Find them in the magenta packaging:

Finally, the coconut brownie: still my overall favorite!  Don't be fooled: this isn't just a variation of the simply fudge brownie with coconut shavings; it's a wholly coconut confection. 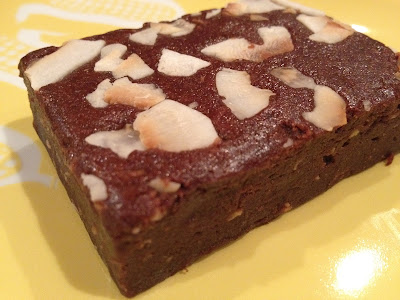 Find them in the yellow packaging: 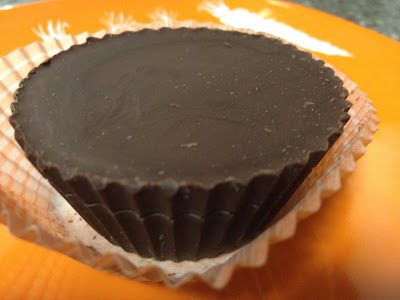 But the caramel and chocolate both looked so smooth and appealing that I couldn't help but to divide it evenly.  Not only did they each devour their portion, but VM dubbed it her new favorite Gone Pie item, "What is this caramel in a huge chunk of delicious chocolate?  I could eat this every day." 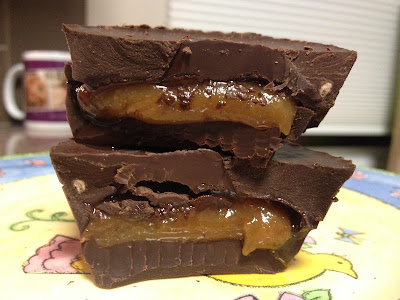 I've since learned that Andrea of Andrea's Easy Vegan Cooking had a similar reaction.  So, it would seem that no matter where you are in the country, Gone Pie's goodies are good enough to turn haters into congratulators!  (Note: Neither Andrea or my parents hate peanut butter options, they just wouldn't choose them first.)  But, for those of you keeping track, I love peanut butter and I love these cups too. 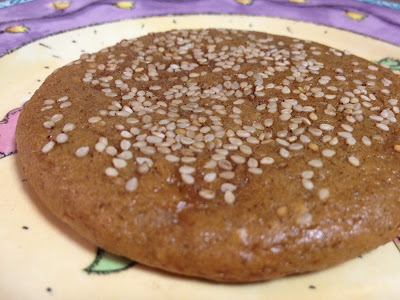 Since I was already full, I took only a small bite of the cookie before putting it away for the next day.  All evening I had a nagging feeling of deja vu that I couldn't place.  The next day I took another small bite and there it was again.  What was it that this cookie was reminding me of?  And then it hit me.  This was the high-quality, vegan cookie equivalent of the (non-vegan) Joyva sesame crunch candies I ate by the fistful growing up.  Since my parents were my original suppliers- with bagsful from Williams' Candy, I had to get their take on my revelation.  They returned for further research and sure enough I was right; genius! (Gone Pie, not me.) 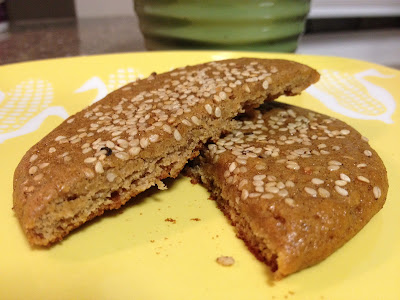 I've just recently figured out how to best explain Gone Pie's offerings.  A co-worker recently married and my boss described her as looking exactly as one should on their wedding day: like the best version of herself.  Comparatively, Gone Pie's baked goods are exactly what you would make if you had the time and talent, as well as access to the highest quality ingredients available to make the best version of a goodie that's good, good for you, and good for all involved.

ENTER TO WIN: updated!  (It's all about the brownies, people.)
It's simple: invent a sweet brownie.  Gone Pie is known and loved for their tried and true confections, but they're also always thinking up new recipes to share.  Why should they do all of the work?  Invent a sweet brownie and, by request, VM will choose her favorite to win!  Deadline to enter is Thursday: 10-11-12; winners will be announced shortly thereafter.  Winner announced below!

Hint: VM doesn't like cucumbers.  Stranger things have happened; I'm just throwing it out there.

BONUS QUESTION #1:
If you're a fan of Gone Pie on Facebook, or this blog in general, you have probably seen me post a Gone Pie sticker stuck in a particularly unusual place.  Where was it?

Hint: While it's technically a correct answer, I'm not talking about my butt.

BONUS QUESTION #2:
VM once inexplicably misread a piece of Gone Pie printed material in a manner that pitched me and, in turn, Barbara, into a fit of hysterics.  We still reference it as the Gone Pie battle cry, but as far as I know I've only mentioned it once within the blog.  What is it? [Dudes, she's been hinting at it all over social media!  Not even hinting...SAYING!!]

Hint: Fans of Beverly Cleary's Ramona Quimby series might remember the occurence of a similar misread in Ramona and Her Father.

THE PRIZE(S):
Listen and listen good, peeps. The extremely generous prize is a 6-pack of Gone Pie's famous, gluten-free brownies, 2 of each flavor: simply fudge, chai nut, and coconut.  There will be a prize for each bonus question as well, so 3 prizes are available in total (1 prize per person).  The bonus prizes will go to the first correct response(s) posted in the comments. 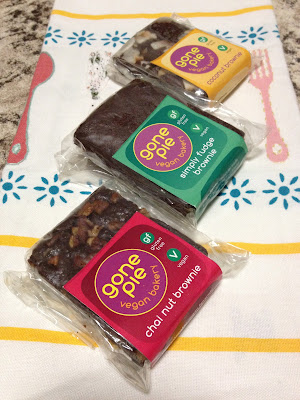 I know; the idea of winning this fabulous giveaway is extremely exciting. But how much of a gambler are you? You might want to hedge your bets and place an order just in case.  There happens to be no better time to do so because Vegan Cuts is offering a deal on a Gone Pie dessert pack sampler! Worst case scenario: you win this giveaway and wind up with two batches of Gone Pie goodness. Now that's a win-win in my book.  Hurry; it's a limited-time-offer.

If you don't like contests or bargains and prefer to buy your treats on the fly rather than order them online, you can almost always find a large assortment of Gone Pie goodies around the city.  To name a few locations: Lula's Sweet Apothecary, Integral Yoga Center, Sai Organics, Sustainable NYC and, coming soon, Perelandra! 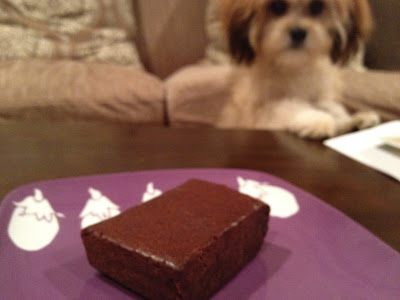 There you have it.  Good luck, one and all!  (What's a post without an outtake?)

WINNER ANNOUNCED!  Thanks to all who entered; we received some really interesting submissions and it's obvious you have collectively given a lot of thought to your own dream brownie concoctions.  VM anonymously reviewed the invented flavors and chose Neva's hazelnut vanilla blondies.  She explained, "I was hoping for blondies; hazelnut vanilla couldn't hurt...as long as there's still chocolate chips."  Well there you have it; the apple doesn't fall far from the tree.  Neva, you didn't leave a contact email, so please get in touch in order to claim your prize.  We hope to hear from you by October 22nd, at which time we'll choose a runner-up.
As far as the bonus questions are concerned, for shame!  Here we run a contest without all that "follow, like, re-blog, re-post, re-tweet nonsense and barely no one even tries?  Andrea came closest with her answer for question 1, but her response was negated by the hint.  As for question 2, I have no words.  Hints were being tweeted and commented and posted left and right, yet no one picked up on it.  Ah well, there's still time to purchase a Vegan Cuts sampler and you'll probably want to get your holiday orders in sooner rather than later; the offerings have been posted (might I recommend the pecan pie?).  So, there; all is not lost.   Thanks to everyone for participating and especially to Barbara from Gone Pie for offering this contest; it was fun!

ANOTHER WINNER ANNOUNCED!  Just when you thought there couldn't possibly be any more updates to one blog, here's another!  While commiserating over the fact that hardly anyone cared about our awesome bonus questions After conferring with the grand dame of the giveaway, Barbara of Gone Pie Vegan Bakery, the decision was made to award a special bonus prize to the single person who cared enough to attempt to answer one of the bonus questions.  What unusual place did I stick a Gone Pie sticker?  Well, I hinted that it wasn't my butt, but Andrea thought I might just have meant to be a little more specific.  While it was, in fact, on my butt, Andrea much more delicately described it as being on my jeans pocket.  Much like on Jeopardy, while it wasn't the answer we were looking for, this was technically correct and warranted a prize!  So, Andrea, thank you for being so conscientious and congratulations for winning more goodies from the always generous Gone Pie!
Posted by Abby Bean at 4:26 AM