When we approached Cafe Blossom on Columbus Avenue, we were startled to see the B in their window; a B?  Really?  We're generally A-only diners... 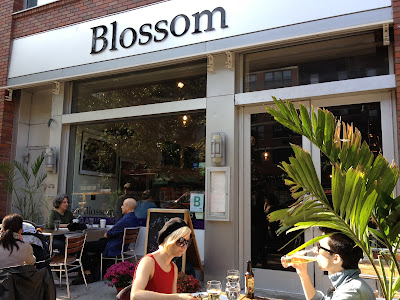 ...but those black-eyed pea cakes were calling our names.  I sat myself on the perimeter of the outdoor seating area with 89 in her bag beside me and VM went in to let them know we'd be dining outside.  The waiter came out and told us that he didn't think we could have 89 with us, but said that he'd "go check".  After about 5 minutes another waiter came out to take our order.  We asked if that meant that having 89 was okay- only to find out that he was completely unaware that another waiter had already approached us and was supposedly checking on the dog rule.  Then he said he'd go check.  He returned to tell us that the manager did indeed say that dogs weren't allowed in the outdoor seating area, "especially since we are up for re-inspection." I was rendered speechless by the odd admission, but credit goes to VM who didn't hesitate to reply, "Looking to get rid of that B I guess?  And that was even before a tiny dog wanted to dine here."  Gotta love it.

Mind you, our complaint isn't by any means that they have a rule, but rather that they are ill-prepared to explain it and incapable of enforcing it with any competence or finesse (this is not the first time their lack of professionalism has ticked me off).  Alternately, all over the city there are clearly posted signs on either end of the spectrum. 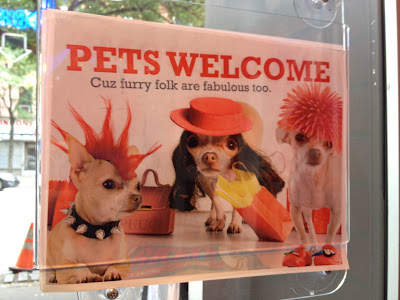 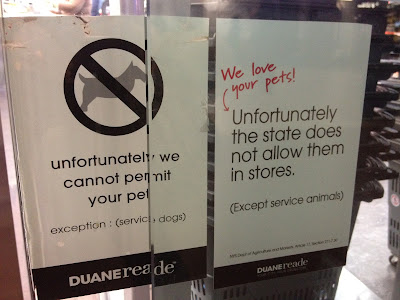 In fact, just yesterday I was in a store where the owner pleasantly approached me and said, "I'm sorry, but we don't have animal insurance so you can't stay in here with your dog.  Maybe I can help you quickly before you go?"  She also mentioned that 89 and I looked alike, but that's neither here nor there.  Nor is the fact that when I said, "Yes; we have the same hair," she replied, "No; it's the face."  I do not have a furry face!  But, I digress.  If this low-key shop owner could so kindly and professionally explain her position, so too couldn't Blossom's staff have?  Surely we're not the first people with a dog wishing to dine outside.   Let's face it- most establishments welcome pets (even those with an A).  If you don't and you choose not to be clear about it, then at least equip your staff with knowledge of your stance so that they may properly handle the request.  Suggest take-out at very least!  But no, they were completely out of their element and literally didn't know what to do.

So, we didn't dine there for brunch.  But later that afternoon we were still craving those stupid pea cakes, so we decided to place a takeout order to enjoy in the park.  A couple of weird things happened when I picked up the order.  To start, they told me that they don't have decaf coffee.  Huh?  I know VM has had coffee there before; this is not an unusual request.  But, alright.  Weirder, they refused to sell me bilberry juice without the champagne because "we just don't do that." Really?  I'm pretty sure you do.  I've been drinking it for years!  But, now that I think about it, the last time I ordered it with dinner they told me it was "brunch only" and also that they ran out (when in doubt, piggy-back your excuses).  Is there a massive Blossom conspiracy against providing me non-alcoholic bilberry juice?  Not cool.  Anyhoo, we took our order to the park and the food was fab, as expected. 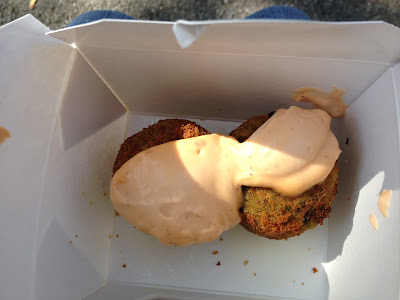 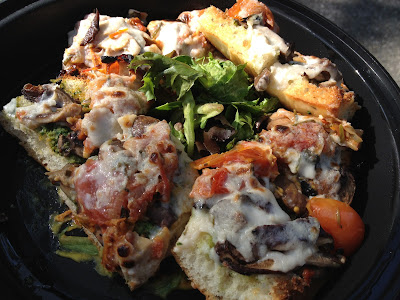 They were out of the root vegetable phyllo pastry and, upon my request, instead suggested: garlic herb gnocchi: sauteed brussel sprouts, white bean puree, fresh lemon.  The gnocchi was on the pasty side and bean puree was an odd pairing, but the brussel sprouts were prepared exquisitely. 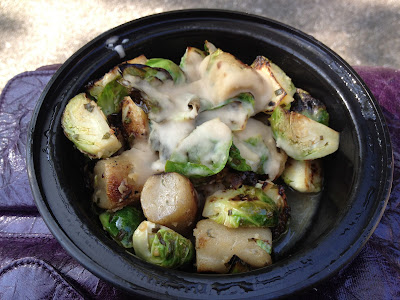 Despite the delicious grub, I still had a bad taste in my mouth.  Blossom is one of the finer vegan restaurants in the city, yet despite their phenomenal food, they consistently exhibit behavior inconsistent with that distinction.  None of this, however, prevented me from grabbing two butterfinger shakes from the newest Blossom du Jour in Midtown West later that day.  What ill-will can't a butterfinger shake remedy? 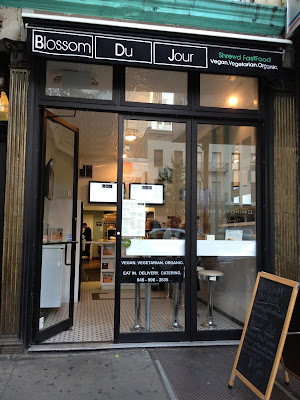 Well, it can't remedy ill-will while simultaneously fostering additional ill-will!  I present exhibit A: I know what you're thinking; where's the chocolate!?!?!  Good question.  And I know you know what I'm talking about, Blossom. 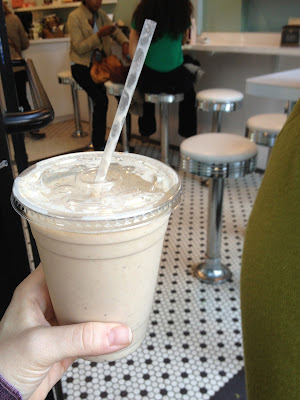 Exhibit B: Why so watery?  This shake is supposed to be thick, not soupy.  It's not Halloween yet, but BOO! 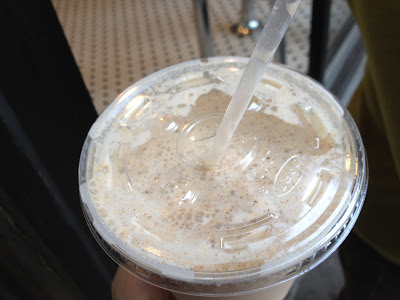 It goes without saying that Terri wins the shake war, HANDS down, and will be our sole supplier going forward.  It was a bad Blossom day from beginning to end.  As VM said, "Blossom always finds a way to get us."  Indeed.  Bad form, Blossom.  To start, I hope that you earn that A.  Then maybe you can concetrate on consistent, competant, and professional service.
Posted by Abby Bean at 4:48 AM