I hadn't been back to V-Note since Christmas Eve Eve Eve, so I was anxious to partake, yet again, in my favorite giant pea-cake recently.  Don't let the bad lighting fool you: it's the best appetizer in NYC. 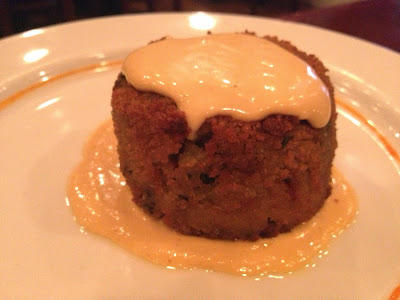 We were headed to The Campbell Apartment afterward, so I decided to skip having a drink with dinner.  My friend ordered Samuel Smith's organic, handcrafted, raspberry fruit ale, though, and it was the tastiest beer I've ever tasted.  This is saying a lot, as I don't like beer in the least. 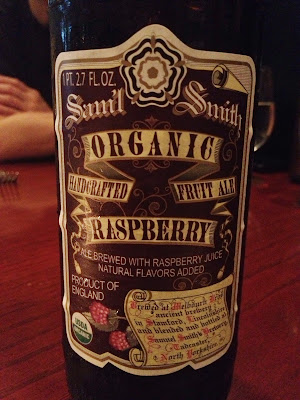 The best bang for the buck, however, seemed to be this Session lager, which made up in cuteness what it lacked in size (the Sam Smith was gigantic). 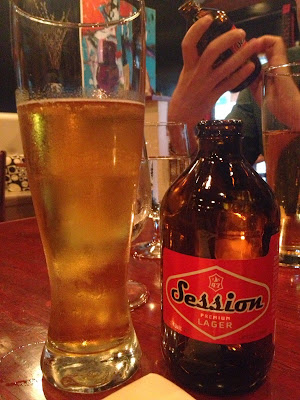 As I already mentioned, there was definitely a black-eyed pea cake: crispy cake of Yukon gold potatoes and black-eyed peas with a chipotle aioli eaten; a friend and I shared.  It was as good as ever, although it was inexplicably missing the spice (sriracha?) this time.

Before you give me too much credit for restraint, know that I only shared because we also wanted to share the lentil rings: french lentils and root vegetables in a phyllo crust with pistachio mustard.  I know; they're not rings by any stretch of the imagination.  But, they're so good.  Not sure why the plate is always a pool of sauce that mostly gets wasted, but if you can score a spoon it's nice to drizzle drench your "rings" with it. 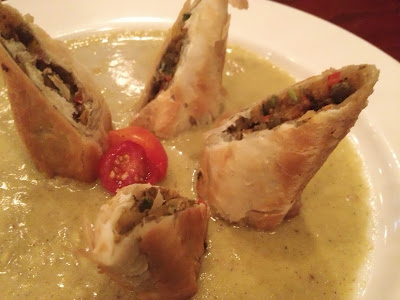 Also at the table: the mushroom scallops & potato crisps: sauteed trumpet mushrooms served with a cauliflower cashew puree, potato crisps, topped with an onion raisin jam.  The friend who ordered this dish makes a mean mushroom scallop herself and deemed it authentic.  Having never had a scallop before, I found the texture chewy and off-putting; I couldn't have eaten a whole portion of this. 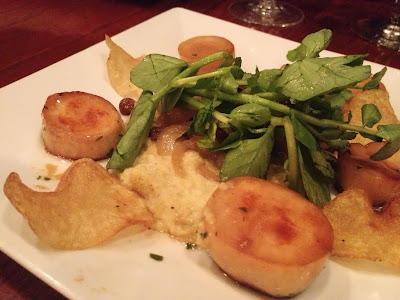 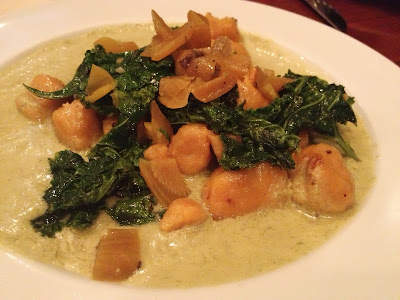 Final appetizer of the table: mushroom calamari fra diavlo: herbed mushroom rings served with house made spiced cocktail sauce.  I did not try one; they were a little on the thick and fried side for me, not to mention that I'd had my fill of faux fish for the evening.  Not one went to waste, though. 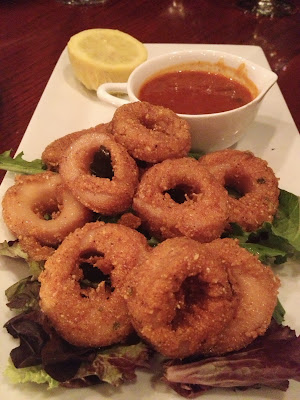 I know I'm not the world's best food photographer, but this is a terrible picture of the crispy pinenut & basil seitan: pinenut and basil crusted seitan cutlets in a creamy white wine sauce with slivered artichoke hearts, roasted potatoes and cherry tomatoes, topped with grilled pineapple that I didn't take.  It was a repeat order by the guest of honor, so I'd say it's a favorite of his.


Salads were the most popular meal choice of the evening; here is the wilted spinach salad: spinach, shiitake, roasted corn, tempeh, cashews, soy bacon crumble tossed in a warm balsamic vinaigrette, which elicited praise from its intended. 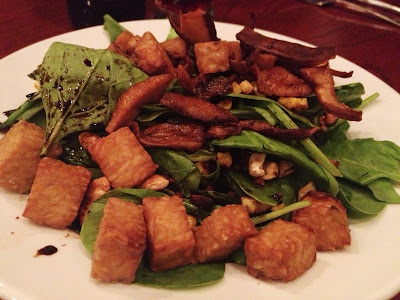 I'd actually been eyeing the BBQ tempeh entree (with horseradish creme fraiche and potato salad with summer roasted corn avocado salad) in the week leading up to the celebratory dinner, but even I had to admit that it was way too hot out to embark on such a feast.  Instead I went with the Caesar salad: crisp romaine, soy chicken, toasted capers, herbed croutons, tossed in Caesar dressing sprinkled with gomashio, the most popular salad choice of the table that evening.  Overall, it was a good one: much more refreshing than a BBQ platter!  I'm not usually a fan of fake meat, but I enjoyed this; the consensus seemed to be that it was Gardein.  The dense croutons and salty capers were a nice touch against the fresh and lightly dressed lettuce, so my only gripe was that my entree-portion salad definitely looked the same size as the appetizer-portion one right next to me, albeit on a bigger plate. 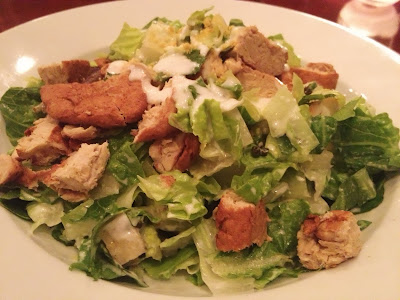 I've said it before and I'll say it again: V-Note has a good menu, a beautiful space, and friendly waitstaff that all work well towards their goal of being an upper-scale establishment.   Why then is it so difficult for the waitstaff to school the runner so that he knows where to place the dishes?  Restaurants far lower priced than V-Note are able to deliver dishes to their rightful owners without asking, "Who had the...," and reaching over diners to either hand-off (really!) or clear plates; this is unnecessary and unacceptable.  Get it together, V-Note; it's a tacky practice. 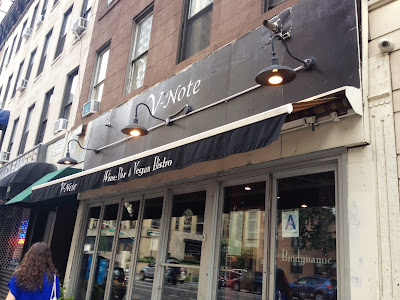 We were all full enough to have skipped dessert, but as we were out for an occasion, we ordered one for the guest of honor.  The chocolate ganache cake: with peanut butter center sounded like it was going to be your run-of-the-mill layer cake, but it was still the clear choice.  Thankfully, the cake surprised us all by being quite decadent and unique.  Unfortunately, it could have been used as a PSA against over-photographing/videoing/Instagramming/Facebooking your life.  Sorry, little cake. 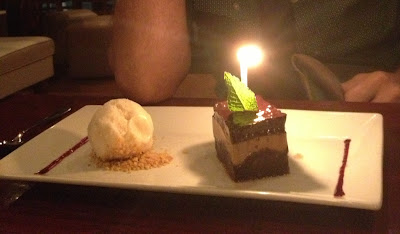 The ice cream, however, was a different story.  Because you can't fool the tastebuds of a high-quality Lula's ice cream aficionado, I knew it was Soy Delicious and asked the waiter to confirm; he did.  To make matters worse, he mentioned that they were in the process of considering carrying another brand, and were looking into Klein's- which is offered in Dunwell Donuts.  A resounding "noooooo!" rose up from everyone at the table (all discerning vegans); Klein's carries accidentally vegan products that are not exactly made from the finest ingredients.  It has its moments, but- to be frank, it hurts my tummy...and I'm not alone in that sentiment.  In the end: Soy Delicious?  Klein's?  For shame!  V-Note should know better than that.  No Lula's, no ice cream; that's my motto (unless, of course, it's from The Best Ice Cream Shop in the Universe).

I'd recommend V-Note for a special occasion, but there's definitely room for improvement.
Posted by Abby Bean at 7:33 AM