I like fall as much as the next person, but do you know what it means?  It means winter is right around the corner.  And besides driving in the snow and my gas bill, what I hate most about winter is that The Cinnamon Snail goes into hibernation in Red Bank, our favorite place to visit them (fret not, you can still find them in New York!). 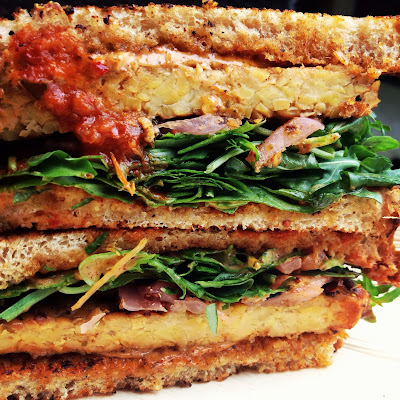 So, in the fall- even though they've been feeding us amazing grub since the previous spring (and all through the summer), VM and I get a little antsy and agree that we should stockpile Snail food...in our tummies.  Come hell or high water.  For those of you not in the Northeast, I assure you that if you could you'd do the same. This recap of our recent sammies is for you.  For those of you who are in the Northeast, get your own while there's still time (or just stalk them in NYC all year round)!

On our last visit, with her still lamenting the hiatus of the smoked portabello carpaccio sandwich, VM was thrilled that there was a new menu item showcasing mushrooms.  The lemon caper grilled oyster mushrooms with roasted chestnut cream, caramelized onions, and greens on an open faced garlic butter grilled tortilla made her really happy. 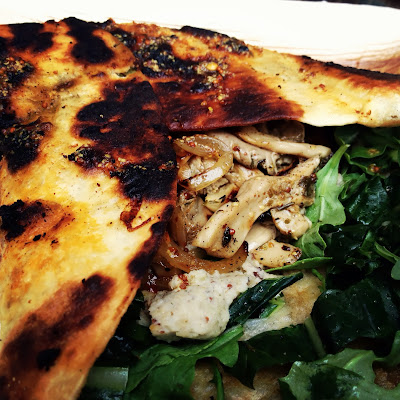 She loved everything about it and, as she's never had their Korean BBQ seitan, she was especially in awe of the wonders of the grilled tortilla.

As for me, although I'd thoroughly enjoyed my gochujang burger deluxe a few weeks prior, it was time again for my new favorite: Thai BBQ tempeh sandwich with pickled onions and Thai basil, arugula, smoked chili roasted peanuts, and sriracha mayo on grilled spelt bread. 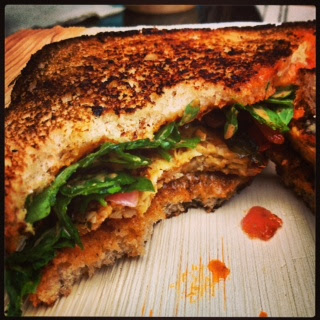 Speaking of smoked chili roasted peanuts, here's a close-up.  They're SO GOOD. 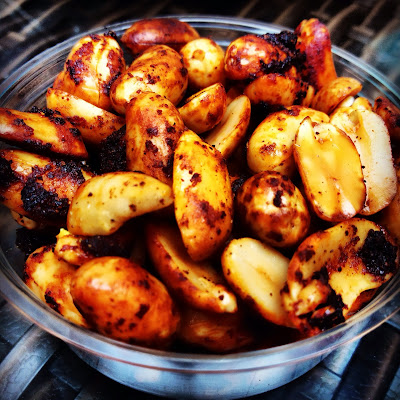 As for this little kangaroo?  She ate my arugula again. 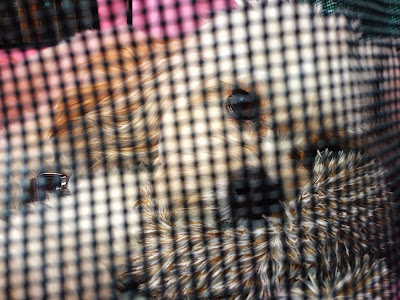 So, yeah: I think The Cinnamon Snail is completely rad; that's why I do blog about them so often.  Their food is better than ANY establishment: vegan or pregan, fine or casual, mobile or sedentary, that I've ever encountered.  They are kind, friendly, unpretentious folks who are always working towards the greater good.  They purposely serve the public out of a truck rather than a brick and mortar establishment because they realize that the general, non-vegan public is less likely to commit to a meal in a vegan restaurant than to try a meal on-the-go from the truck with the longest line in the neighborhood and they want to reach as many people as possible with their yummy food.  Watch here for more information in their own words (warning: this video has been rated SJ for spandex jumpsuits).


You might already know some or all of the fabulosity you've just read.  What you might not know is that the jar on the truck that you probably stuff dollars into as an appreciative "tip" actually holds donations to the Woodstock Farm Animal Sanctuary.  That's just how they roll.

As this post publishes, The Cinnamon Snail has just been awarded the Vendy Hero award as a result of their selfless, generous, and tireless support of the people most egregiously affected by Hurricane Sandy last year.  In 2012 they were voted the People's Choice Vendy award.  In 2014 I anticipate they will win the World Domination Vendy, and it will be just as well-deserved.  Congrats, Snails.
Posted by Abby Bean at 6:54 AM