Look, I'll just get right down to it; they've done it again- this time, cannolis. 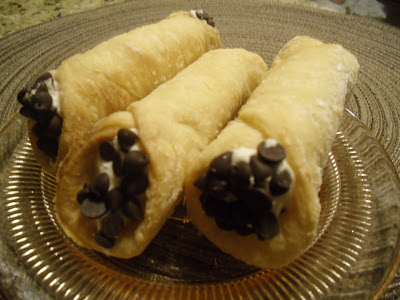 The very first day Vegan Treats announced the availability of their newest creation I wanted to hop into the car and drive right over, but VM physically restrained me explained the irrationality of traveling such a distance for a snack.  Granted, this is the same woman who thought 2 cookies packed in my lunchbox was sufficient, but for some reason I listened to her.  Then weeks passed and I'd yet to have a cannoli.

But, on the way to the Bethlehem Vegfest (post coming!) this past weekend, we stopped at Vegan Treats for breakfast (don't judge us).  Whilst I was lingering over the donut choices and inquiring about the ice cream flavors, VM pointed out the platter of cannolis that was just out of my line of sight.  Did you hear me squeal from wherever you were on Saturday morning? 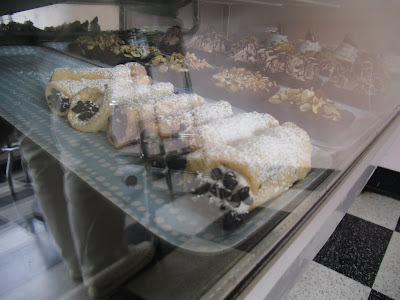 So finally the time had come.  WOW. 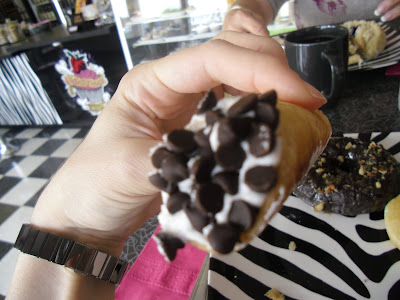 A little history.
Let me start off by saying that VM is a big, huge, HUMONGOUS fan of cannolis; they are her favorite dessert.  I was never much of a fan.  But when something previously elusive becomes available veganized, I MUST TRY IT!!! 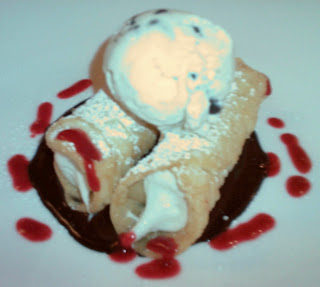 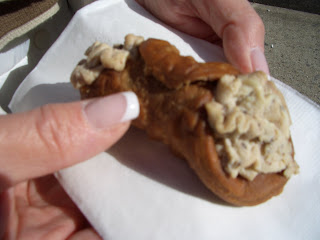 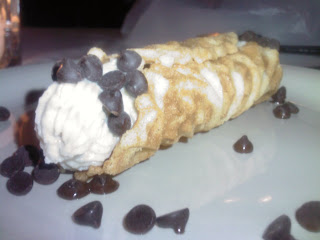 But here we were, finally faced with a Vegan Treats cannoli.  I'll admit, VM put up a good fight.  I ordered one and she resisted.  There she sat, content with her blueberry danish...but I knew she was watching me. 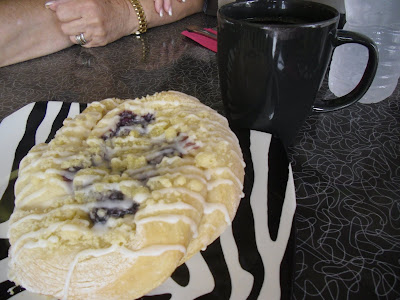 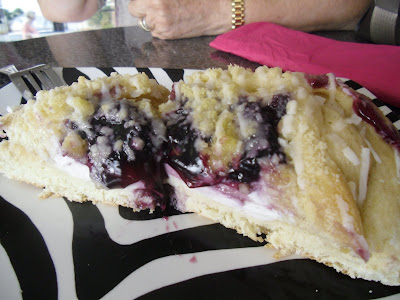 So first I dug into my pumpkin donut.  YUM.  So light and filled with an airy, creamy filling that was just pumpkiny enough.  I believe the top had a thin schmear of icing and something autumnal: graham cracker crumbs?  Fall food! 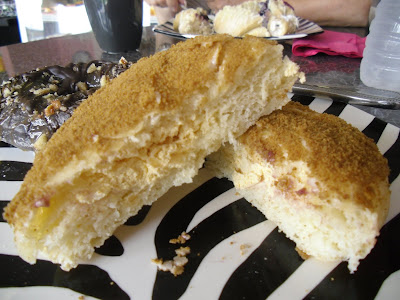 Next up: chocolate donut with glaze, caramel, and pecans; a turtle donut, if you will.  So extremely moist you would have thought it was a brownie. 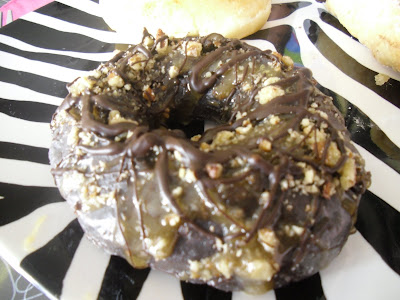 And then it was time to taste the cannoli.  To say VM was curious would be an understatement.  I took a bite and my bulging eyeballs said it all.  "You have to try this", I said.  She hesitated.  "No buts", I said.  She conceded.  And then the birds sang and a sunbeam flooded the shoppe; VM proclaimed, "She did it."

Of course by "she", VM meant none other than the incomparable Danielle Konya of Vegan Treats.  Much the same as in the rest of the vegan world (and beyond), in my house Danielle is considered quite the baking legend.  Partly because her goodies so impress my entire vegan/vegetarian/omnivorous family and partly because VM hates to cook, anything that comes up as a veganizable possibility, VM is satisfied to wait for Danielle to attack and conquer it.

And conquer she did.  We agreed that the cannoli was just authentic enough to satisfy even the most cannoli-loving vegetarian (VM), and just different enough to knock the socks off someone who was never previously impressed by the sweet.  And anyone who's anyone knows- the best quality cannolis not only have chips on the ends, but mixed into the filling as well.  Check! 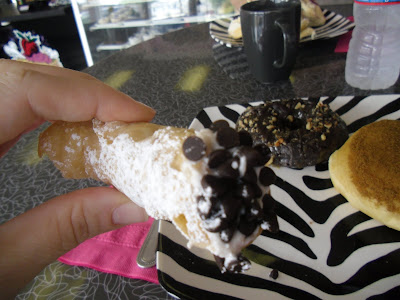 Note: unlike their non-vegan counterparts, the Vegan Treats cannoli shell stayed crisp even after a full day in the fridge.  Point being: buy extra*; they'll keep.

In the interest of full disclosure, I also brought a couple of things home.
Who can resist the pecan sticky bun?  I can't!  And, thanks to me, neither can my family, my friends, my co-workers... 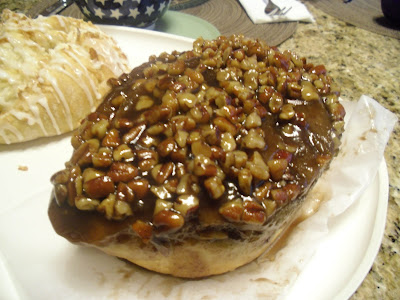 The coconut bun is a close second. 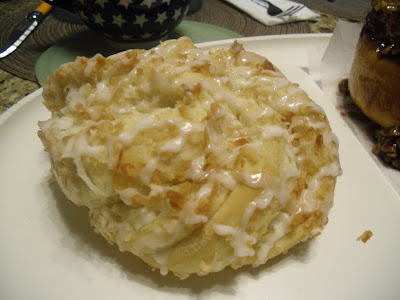 You just cannot come home without a Boston Creme donut for your dad.  And one for you too.  I'm super-glad to report that VT has returned to the original, superior chocolate topping.  But, can I get a little extra creme in my Boston?  It's too good!! 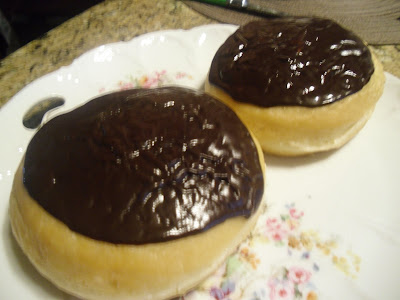 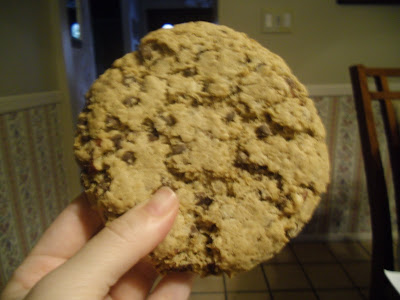 And a round, vegan devil dog whoopie pie for good measure.  Apologies for the atrocious photo; I really wanted to eat it. 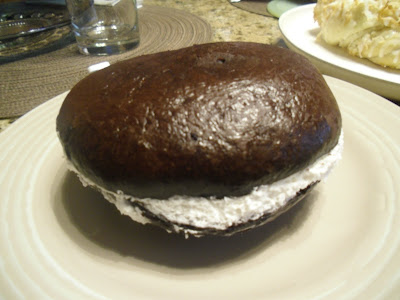 And that should do it. 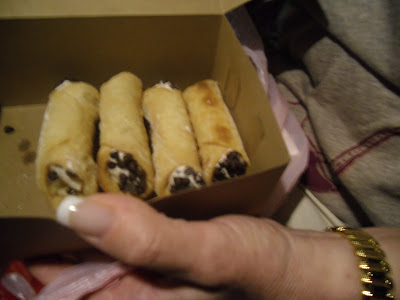 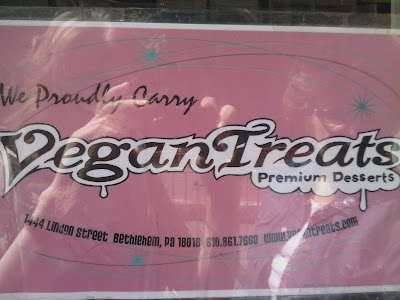 I really need one of these signs for my house.
Posted by Abby Bean at 6:27 PM