And the cleansing continues! 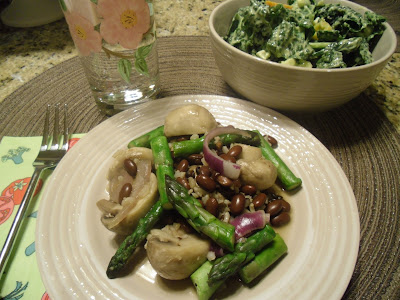 Once again, I got to bed a bit later than would be ideal.  Then I got up significantly earlier than usual, in order to have enough time to do everything I needed to do before work to prepare for "breakfast" and lunch.

The cayenne in the warm, lemon water kicked my butt again upon first swallow.  After a few, significant sips I began to have the sneaking suspicion that the combination of the sour mixed with this seemingly innocuous spice might have been the culprit for my nausea yesterday.  Since unusual flavor combos aren't usually my thing, I decided against finishing the mug and will tomorrow try just lemon water. 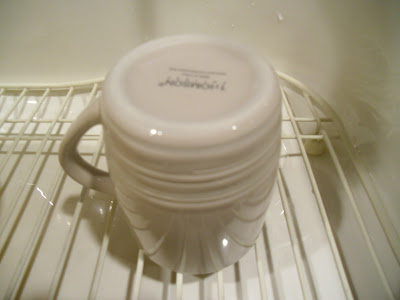 Perhaps my veggies weren't as juicy today as yesterday, because I needed to use the same 2 cukes, 1/4 apple, and twice as much celery to wind up with the same amount of green juice. 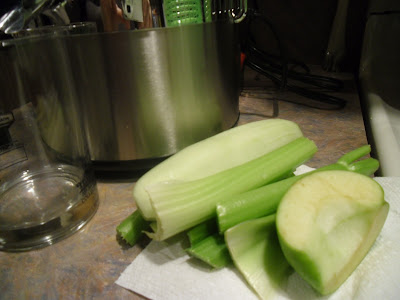 I was ready with my ice cubes (although the temperature outside didn't warrant it), and again drank while I cleaned...then finishing while I read the Day 2 cleanse page in Crazy Sexy Diet.  14 ounces of juice is a lot to stomach so early, but I can't very well tote my juicer to work with me. 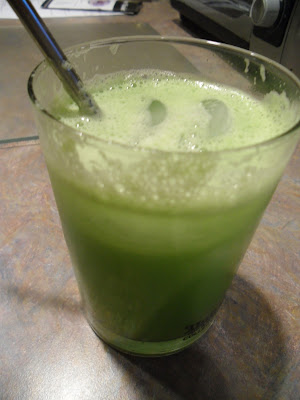 Have you ever seen those sumo wrestlers whose bodies are so big that they can't put their arms down?  That's what I felt like when I got up this morning.  No, I didn't become uber muscular overnight, but it would seem that the little bit of exercise I did really antagonized my muscles...and they were protesting en masse.

The last time I "exercised" was a month or so ago, when certain fit "friends" forced two of us unwillings to walk across a bridge. For no apparent reason. Well, to be fair, we did want to be on the other side. But that's what trains and cabs are for. Not that it matters, but I think it was the Manhattan bridge.  Well, I can't be sure; maybe W'burg?  Either way, it was longer than it looked, the weather was hot, and our footwear was inappropriate; as you might imagine, our dispositions were less than sunny. Thankfully, Soy & Sake (or, more specifically, lychee martinis) was our destination or surely the two of us would have veered away from the group at the first opportunity. Point being, I still haven't recovered.  So when a friend pointed out recently, "you...need to get off the couch and on a bridge...", I conceded that I did have to move a little in order to attack this cleanse full force.  But, ouch.

For lunch I finally had my previously prepared raw kale, carrot, and cauliflower salad with sweet dijon vinaigrette (CSD p. 209); it was really good and thankfully not soggy from having been in the fridge a couple of days. 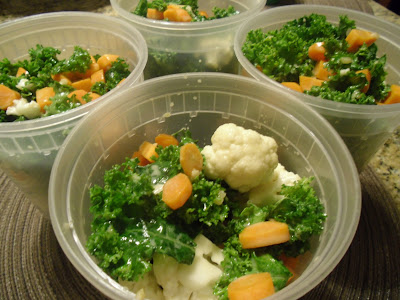 While I was preparing dinner I had a few Marcona almonds.  I'm thinking I should be eating this earlier- say, mid-afternoon. 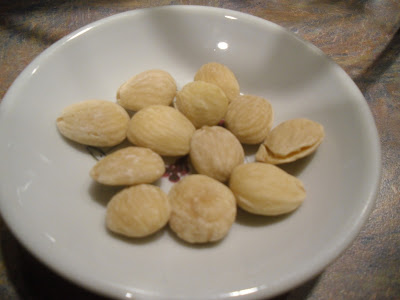 For dinner I made a raw kale, sweet pepper, carrot, and cauliflower salad with dino (lacinoato, but dino is more fun) kale for the first time.  The leaves are much hardier than I'm used to; my jaw actually got tired of chewing! 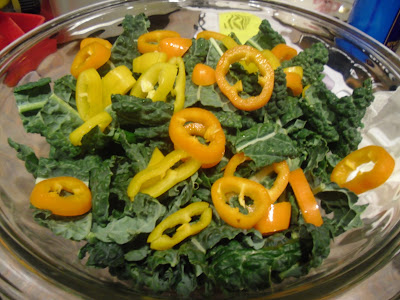 I much prefer my curly kale, but the creamy avocado cumin dressing (CSD p. 210) more than made up for it.  I bet it would make a great dip, too. 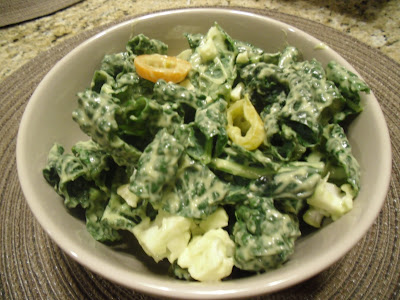 Then I sauteed asparagus, mushrooms, black soybeans, red onion, and a sprinkle of yesterday's rice medley with toasted sesame oil, Bragg's, garlic, and lots of freshly ground black pepper.  It was really good!  I don't know why it looks like I only had asparagus stems; I had plenty of tips as well. 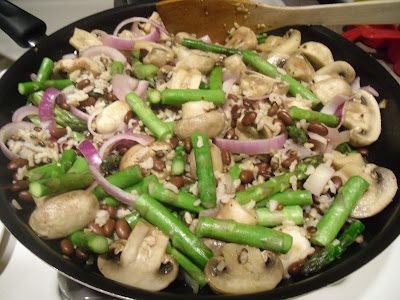 This morning I almost left the house with my CSD book in my arm instead of my pocketbook, that's how much I've been carrying it around these past few days.  I'm definitely going to have to take a step back, relax, and read a novel for my own sanity.  I admit I am overwhelmed with how time consuming this is.

The instructions in the book are a little like watching Suze Orman.  Now I love me some Suze; she makes terrific sense and has great ideas about how you should distribute your money amidst savings, retirement, and emergency funds (among others).  The problem is, there's only so much money to go around!  Same with Kris Carr and time- she has lots of great suggestions for cooking carefully, eating thoughtfully, meditating regularly, exercising often, making sleep an 8 hour priority, etc.; it's just that there's only so many hours in a day.  I won't break down my paycheck for Suze, but look at it this way.  CSD suggests 8 uninterrupted hours of sleep.  When you subtract 10 hours for work plus commute, that leaves only 6 hours to do everything else- of which I don't want to spend 5 shopping, washing and chopping!  But, I will.  For now, I will.

Overwhelmed, but in it.
Posted by Abby Bean at 6:04 AM