We interrupt your regularly scheduled mid-cleanse blogpost to bring you...Kajitsu! 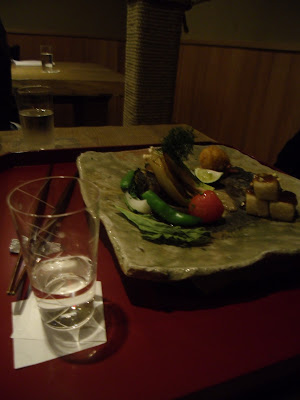 For VM's birthday I gave her a gift certificate to Kajitsu.  We've tried to go a couple of times since, but they are always booked far in advance (yay for popular vegan restaurants).  This weekend we had lots of fun planned, but I couldn't think of where we could go that would be not only be cleanse-friendly and VM-approved, but would also not leave me feeling like I was missing out on a specific favorite (Blossom black-eyed pea cakes, I'm talking to you).  At the last minute I had an epiphany- vegetable heavy Kajitsu!  So, I begged and pleaded and actually succeeded in getting the lady beans in for the evening. 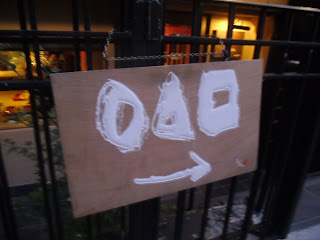 That morning we went to Cafe Blossom for breakfast.  I know, so close to the pea cakes.  But even I don't feel like a pea cake at 11:00am.  VM, being the supportive trouper that she is, agreed to go raw for the meal (even though I'm pretty sure she could go for a pea cake at any time of day).  So, we shared.  First up, Autumn Sweet Potato Rolls (Raw): "coconut noodles, jicama, carrot, red and yellow pepper, scallion, avocado, almond ginger dipping sauce".  VM liked them more than I did.  They were were good- fresh and crisp, but nothing screamed wow. 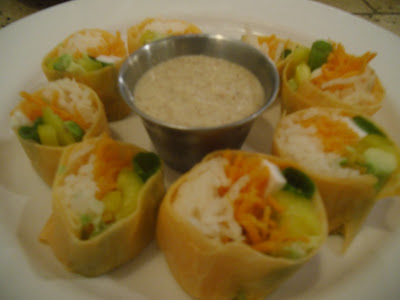 That was because the wow factor was all packed into the terrific Live Nachos (Raw): "dehydrated flax seed crackers, cashew sour cream, tomato salsa, mango guacamole".  Even though I'd be all over any number of the other menu offerings on a typical day, this is something we both agreed would make the non-cleanse cut; they were really great- especially the crackers. 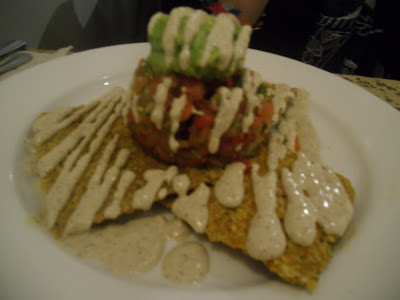 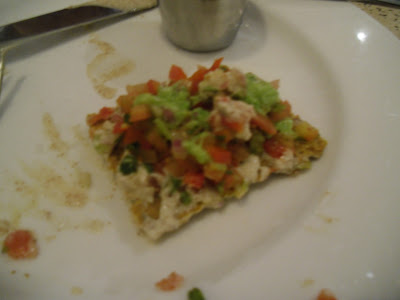 Mid-day we stopped at Irving Farm Coffee for a black coffee (VM) and a chamomile tea.  The counterperson was very nice and I got the question of the day right!  What is the only internal organ that has the ability to regenerate itself? 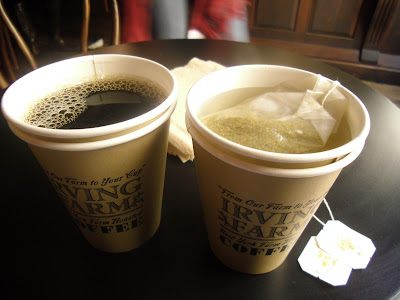 And finally, it was time for Kajitsu.  Kajitsu serves shojin cuisine in a monthly rotating menu of two options: Kaze- 5 courses, and Hana- 8 courses.  We chose the Hana and VM accompanied her meal with the sake pairing.

The restaurant is minimalist in decoration and there is no music; staff voices are even and low without being hushed and they are methodical and precise with their movements and explanations.  There is not really any conversation, let alone friendly banter. 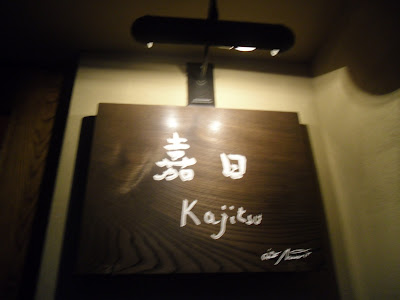 All courses, except dessert, are served on enamel trays that remain on your table.  The waitstaff both delivers and removes only one dish at a time.  There are no western utensils offered, so prepare to slurp your noodles and sip your soup. 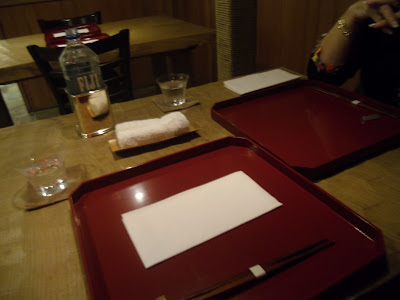 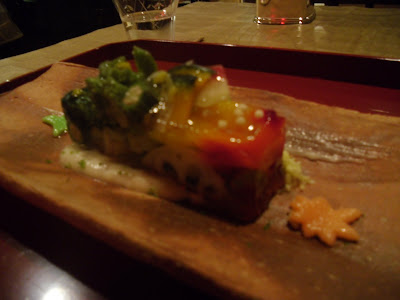 Red Miso Soup with Maitake Mushroom Tempura and Japanese Eggplant
Yes, that tempura-ed mushroom is practically the size of my head.  Yes, I tasted it; it was as good as it looked (admitted cleanse fail).  Thank goodness for vegan tempura.  This was one of those instances where the waitress's detached and strictly professional behavior left us feeling like naughty schoolchildren.  When VM asked, "Excuse me, is this soup served with a spoon?", the response was an abrupt and shockingly surprised, "No!  You sip!", followed by a curt turn on her heel as she immediately took leave of us and our preposterous inquiry.  She didn't even get to hear VM respond, "I was afraid of that." 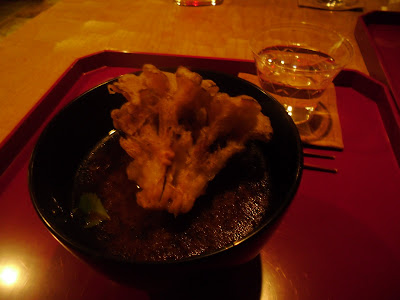 Underneath the monster mushroom was a bushel of Japanese eggplant tied together with a delicate, edible rope.  As two non-fans of eggplant (unless it's fried and smothered in sauce and cheese), we agreed that this was an exception- as tender as a homemade artichoke's heart.  The red miso broth was outstanding: like no miso soup either of us have ever tasted. 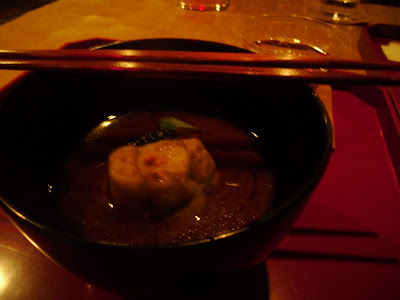 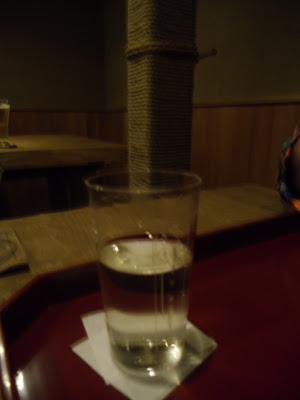 House-made Udon with Goma-dare
chayote, shiso, schichimi
These thin, wheat noodles (admitted cleanse fail) were served with the explicit instruction to dip them into the sauce.


But, as if the slippery noodles weren't unruly enough, the unnecessary travels for dipping eventually immediately got old.  We chose instead to dump the sauce right into our bowls of noodles; things went considerably more smoothly after that.  I will note that the noodles expanded in my stomach in a matter of minutes- no doubt a result of my recent, cleansing diet. 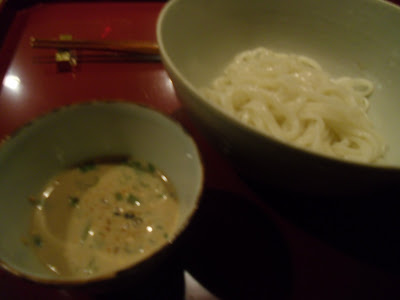 Slow Simmered Vegetables
satoimo, carrot, mizuna, fried tofu, kabocha, bogo
This course was served to us by another waitress who very sweetly waited for us to react.  When we didn't, she prodded with endearing, understated urgency, "Please remove the lids",

and only then did she describe the contents of the bowl.  Yet, however our misstep affected her, nothing about her behavior towards us left us feeling uncomfortable; it would seem it was mainly our waitress who was a bit on the uptight side.  It was explained to us that each of the vegetables were cooked in their own juices separately from the others in order to preserve the integrity of the tastes.  The onion and the pea pod were crisp and bold, while the rest of the vegetables tasted inherently more stewed.  The item that looked like a mushroom stem was outstanding and VM loved the Japanese pumpkin. 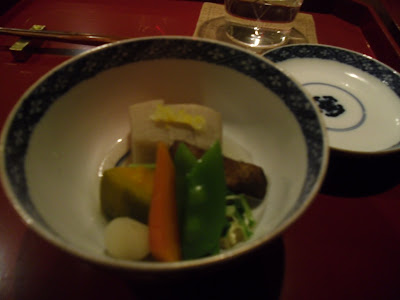 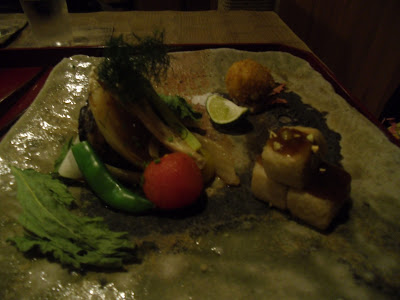 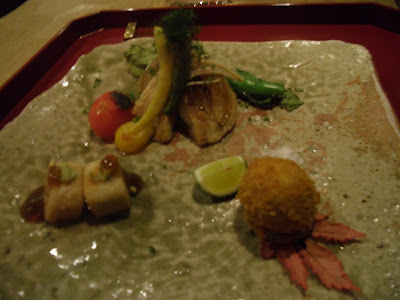 The croquette was served with a tiny slice of a particular type of lime and small mound of salt for dipping.  This was one of VM's favorite items of the evening, but I didn't like it as much.  I took a bite (admitted cleanse fail) and relinquished the rest to her. 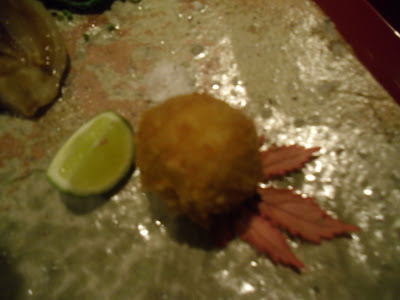 The sauce was just slightly smoky and pleasant, highlighting the tomatoes, green and yellow string beans, snap peas, onion, mushrooms, and root vegetables.  The charred leaves tasted like my attempts at kale chips dehydrated in the oven (minus the nooch). 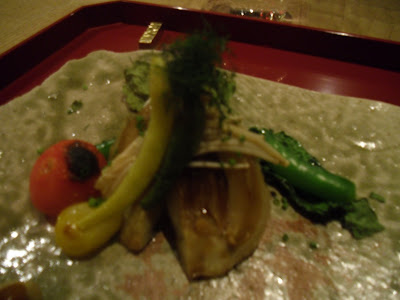 VM was trepidatious of the Awa-Fu as soon as it was presented, so I took the first taste (admitted cleanse fail).  It was chewy and a not a little bit pasty, but the sauce along with the wasabi and buckwheat seeds helped to get one down.  That was it for us. 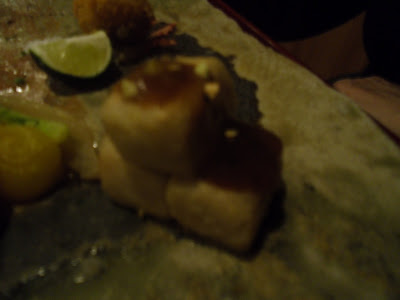 Hijiki Rice with Black Sesame and Konnyaku
whole grain puffs, soy powder, kuroshchimi
House-made Pickles
This is where the meal took a turn for the worse for us. It was explained to us that we should first taste the rice and then top with the puffs and enjoy the pickles alongside.  The smell of the rice alone made us both grimace; we are not fans of the ocean-scented (and tasting) hijiki seaweed.  After one taste each to confirm, we attempted to clear enough rice of seaweed to taste with the puffs.  Only I managed to (almost) successfully do so and it was pleasant, but not worth the effort of picking out the seemingly growing population of seaweed in order to continue.  The pickles were unusual, not at all like either American or Indian variations, but managed to mask the taste of the seaweed for the moment.  Our waitress did not acknowledge that we both sent our plates back full. 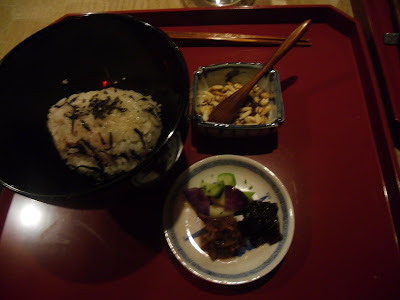 Sweet Potato Kinton with Coconut Tofu Cream
walnuts, macadamia nuts
As with many Asian desserts, this sphere was filled with bean paste- this of the chilled, white variety.  Rolled in riced sweet potato and dusted with nuts, I liked it more than VM, but it was not a table favorite.  What we both agreed upon was that we could have easily eaten a bowl full of the crispy, candied, sweet potato skin garnish- so unexpectedly sweet and tasty. 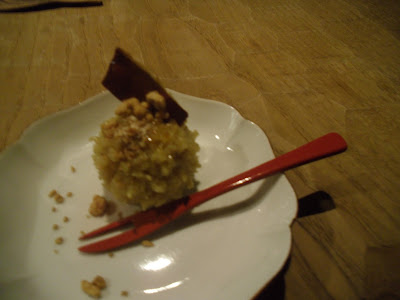 Matcha with Candies by Kyoto Kagizen-yoshifusa
We are not green tea lovers and, unfortunately, this grassy matcha- however beautifully presented, was no exception. 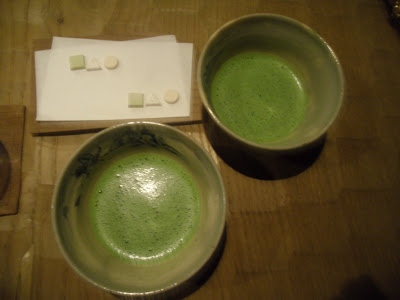 In the excitement of having been presented with candies representing the restaurant, I quickly popped the bottom, right corner, yellow circle in my mouth to VM's shock and dismay.  She quickly admonished me to, "spit it out; you don't need it" and, in fact, I didn't- it was pure sugar.  Still a pretty way to end the meal. 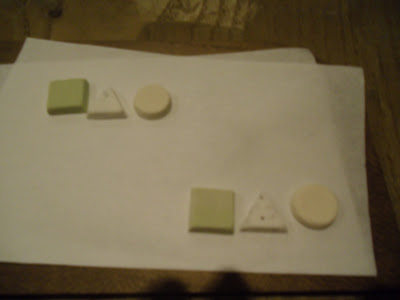 It was unfortunate that the last two courses were so disappointing to our Western palates.  Because, despite the fact that we were plenty full, the rest of the meal had been such a varied assortment of pure flavors that we would have considered returning.  But, when you end on a low note, you begin to reconsider.

Aside from that, we would have appreciated more interaction and personality from our waitperson in particular.  When an experience is so unusual, it benefits from having a friendly guide rather than simply a narrator.  Such friendliness would have made for a significantly more comfortable and pleasant experience and we wouldn't have been made to feel so gauche at every turn. On the whole, the experience lends itself to more endearment than was offered.

I think I can safely speak for both of us when I say that we had an absolutely wonderful time for our very special occasion (HBD VM! xoxo) and would recommend as such or simply for a new experience.  It was a highly enjoyable evening for us, but probably not a repeatable one.  We have plenty of other places to try!

Finally, I may as well admit it.  I went to Lula's tonight.  But, I DID NOT EAT ANYTHING.  I swear.  How could I?  There are people who know me spies working and eating there at all hours of the day.  What I did do, was buy a pint of hard pumpkin ice cream to have on hand for the moment when my cleanse ends.  I realize I should probably consider easing into sweets, but since this Lula's cashew-based pumpkin ice cream counts as vegetables and nuts (in the AB dictionary), I don't think there will be an issue.

Ok, I also bought a Sweet and Sara chocolate covered marshmallow bat* to save for later.  That's it; I promise!

*Sara, extra credit for the person with patience enough to halve the rice crispies for eyeballs!
Posted by Abby Bean at 11:05 AM