Vegan MoFo Day 19: The Save Pile is Growing

So, you might have noticed that yesterday I referred to a "save" pile.  It's true, I have begun stock-piling treats to scarf consume at the end of the cleanse.  Perhaps this isn't the healthiest way to approach the last week of a three-week cleanse, but whatever get's you through; don't judge.


Two weeks in and I've admittedly learned a lot.  For starters, I hate green juice.  Just kidding!  Well, not really, but that's not what I'm referring to.  Most importantly, I learned that I'd forgotten about clean, raw food.  Yep, I said it.  I am a sweets fanatic, but I'm still the same girl who was excited to go to an elementary school birthday party where they served carrots and celery.  I am confident that goodies like raw asparagus, zucchini, and peppers will remain in my repertoire.

I've also learned to try new things- from an avocado shake (meh) to raw, spiralized spaghetti (yay); the worst that can happen is that you don't like it and you move on.

Exercise: I hate that too.  But even my car goes in for service every few months, so shouldn't I take some care of my bod?  Sure, it's a pain to pull on those exercise clothes and get to it, but a half hour as often as you can work in during the week will make your body feel better.  And you know what else?  More snacks, less guilt.

As for what I'm eating right now...for breakfast I had sliced cucumber.  Not exactly the breakfast of champions, but I really begrudge the juicer; we're not currently on speaking terms.  Would I have rathered something beige- cereal, a bagel, oatmeal, or anything with maple syrup?  Certainly, but no juicing doesn't mean no cleansing.  It's going to be a green veggie breakfast week; I'm in the home stretch. 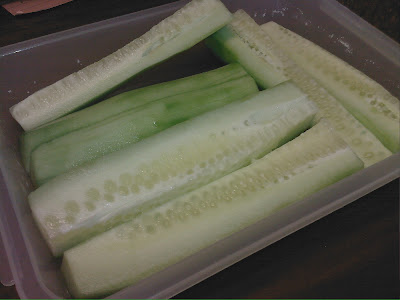 For lunch I actually went to a nearby cafe and assembled a salad.  I like the idea of a buffet (take as much as you want of whatever you want), but generally not the price or the germ factor.  Today, with nothing in tow for lunch, I made an exception.  Ok, I admit that I hung around and waited for them to replace each plate before I partook.  Really.  It was lunchtime; it didn't take that long.  Mixed greens, cauliflower, pearl onions, red pepper, white carrots, tofu, peas, purple onion, pecans, a splash of olive oil and a boatload of red pepper flakes: 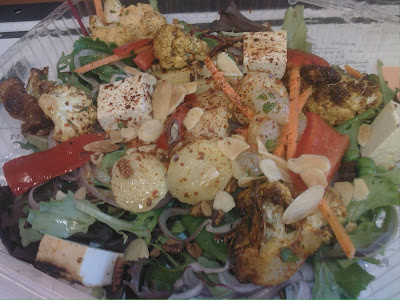 I had so many complaints about it, though, that I was quickly reminded to make my own damn salad!  It's tastier, cheaper, and all-around-better.  Also, no sneaky bits of cilantro.  Seriously, does it have to be in everything?

Dinner was a bit sketchy, as I had something to do after work that prevented me from arriving home in time for what I would consider a timely dinner (I don't like to eat late).  I was exhausted (still) and knew I had to prepare lunch for the rest of the week: purple kale salad with green goddess dressing (AFR p.26), so I split the difference and simply ate for dinner whatever didn't fit into my lunch containers.  Note: this dressing is RICH.  I added cucumbers, but tomatoes would have been even better. 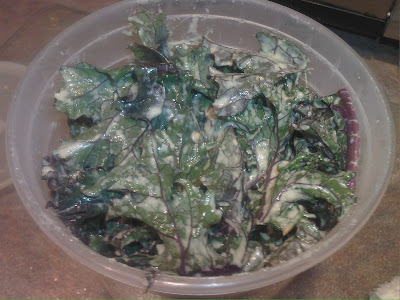 Oh yeah, one more thing to add to the "save" pile: old school globe chocolates like they used to sell at Down to Earth! 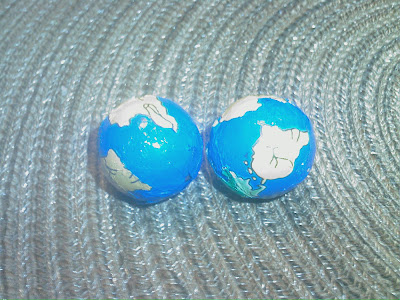 Yes, I literally bought two bunches of purple kale and two Earth balls.  I'm not proud.  Aw, who am I kidding?  Yes I am.
Posted by Abby Bean at 6:53 AM